Turn on suggestions
Auto-suggest helps you quickly narrow down your search results by suggesting possible matches as you type.
Showing results for
Search instead for
Did you mean:
Create a new blog
1988
Views
5
Helpful
0
Comments

Getting more for less with Catalyst 9600

Enterprise campus networks are facing an imminent need to support ever increasing demand for bandwidth and system throughput. This is driven by HD capable video end points (video will constitute 82% of all IP Traffic1), applications such as Virtual Reality/ Augmented Reality (expected to grow 12-fold at 65% CAGR1) etc. and advanced wireless technology end points such as Wi-Fi 6.  Additionally, the explosion of IoT is dramatically increasing the number of devices connecting to the network.  It is expected that by 2020, 10% of all information on earth will be generated by IoT devices1. On the other hand, Enterprise IT organizations are struggling with rising network operational expenses, with average network operation expenses accounting for nearly 5x the cost of the network itself2.  Wouldn’t it be nice if Enterprise IT could grow network and system capacity while adding new services with very minimal investment?

Let me show you how Cisco Catalyst 9600 Series switches can grow with customer requirements with minimal investment providing the lowest total cost of ownership.

Catalyst 9600 Series switches are purpose-built as Cisco’s next generation Enterprise Campus modular core and aggregation switch. It has been designed to meet not only customer requirements for today but for the next decade and at the lowest cost of ownership.    The switch is powered by Cisco IOS XE operating system and custom UADP ASIC. The programmable pipeline and a flexible parser capability in the ASIC enable adding new standards and protocols without the need to rip and replace or re-spin of the hardware, in other words customer does not have to invest in new hardware.   Cisco IOS XE is an open, programmable and modular Operating System that enables scalable hardware configurations, feature velocity and highest resiliency features such as SSO (Stateful Switchover), ISSU (In service software upgrade), SVL (StackWise®Virtual), hot patching and GIR (graceful insertion and removal) helps reduce downtime for planned maintenance and Software upgrades.  Programmability is at the heart of the Cisco IOS XE operating system, supporting industry standard tools and APIs such as PxE booting, ZTP, Ansible, Puppet, Chef, on-box Python, NETCONF/YANG, RESTCONF etc. enabling customers to automate complete lifecycle from day 0 through day N of Catalyst 9600 Series switches. This helps them simplify operations, agility to adopt network changes and reducing overall cost of operations.

At launch, Cisco Catalyst 9600 Series switches come with the Supervisor-1, making it a 9.6 Tbps switching platform (2.4 Tbps at line rate non-blocking per slot).  This capacity would probably suffice for most of the Enterprise organizations today, but in a couple of years most Enterprise networks may need to scale to support the continued increase in demand. The Cisco Catalyst 9600 Series switch architecture will  enable you to double system capacity with less than 25% of additional investment.

The Supervisor-1 on Cisco Catalyst 9600 Series switches enables 2.4 Tbps switching capacity per slot, enabling 12 ports of 100G running at full duplex in a non-blocking capacity. Upgrading just the Supervisor will double the system as well as per slot capacity effectively making the system a 19.2 Tbps switching system or 4.8 Tbps per slot system - without changes to any other component.  This increased capacity will enable the 12 x 100G ports that were disabled on the 24 port QSFP line card with SUP 1, effectively doubling per slot capacity.

One must be wondering, “That is great but what if I am using the 48 port SFP line card, would I still be able to double my capacity?”  You bet, why would we leave the SFP card behind.  With Supervisor 1 the SFP line card supports 1G/10G/25G speeds, upgrading the Supervisor will enable the card to also support 50G speeds across all the ports making the card a 2.4Tbps capable card, effectively doubling switching capacity of the line card and the system.

Yes, the Catalyst 9600 Series is designed and architected allowing you to scale the system capacity with minimal investment, but it also enables upgrading network infrastructure capacity with practically no investment.

The last transition in Enterprise was to 10G and 40G.Going forward we expect the transition to 25G and 100G. This transition is expected to be much faster than the previous transition. Recent studies predict that 25G will outgrow 10G by year 20213. 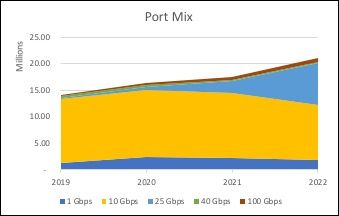 25G optics uses the same mechanical specifications as 10G SFP+ but with higher baud rate. 25G is already becoming the de-facto speed to the top of the rack in the data center. It seems only natural that 25G would become prevalent within Enterprise campus as well. While this should be a simple exercise with 10G/25G dual rate optics already available in the market, it is not. The challenge is driving 25G to the same distances of 10G, specifically on multimode fiber which is the predominant fiber type deployed in Enterprise campus. All of the 25G optics in the market today have been designed predominantly for the Data Center where the distance between devices are typically less than 100m. In a campus environment, on the other hand, if 25G is to replace 10G over existing OM3 /OM4 dual strand fiber infrastructure it must exceed distances greater than the normally supported 100m. The dual rate 10/25G-CSR optics supported on the Catalyst 9600 Series switches enable support for 25G speeds up to 300m (OM3) / 400m (OM3) enabling Enterprise IT to transition to 25G without requiring any infrastructure upgrade - a costly, resource draining and time-consuming exercise.  I see this optic to be the Catalyst (pun intended) for 25G adoption in Enterprise Campus.

The Catalyst 6000 has been the Gold standard for Enterprise Campus core for the last two decades. Introduction of Cisco Catalyst 9600 Series switches raises the bar again, it has been purpose built to meet customer requirements for the next decades. It can grow with customers growing network requirements and that too at the lowest total cost of ownership, so if network is the core of your business then Cisco Catalyst 9600 Series should be the core of your network.