The Catalyst 9500 Series continues to shape the future with continued innovation to help re-imagine connections, reinforce security and redefine the experience for Enterprise Campus Core and Edge. The new C9500X-28C8D switch is the industry’s first purpose-built 400, 200^, 100, 50*, 40^, * and 10* Gigabit Ethernet switch. The design of the switch helps it address the Enterprise Campus and Edge requirements. 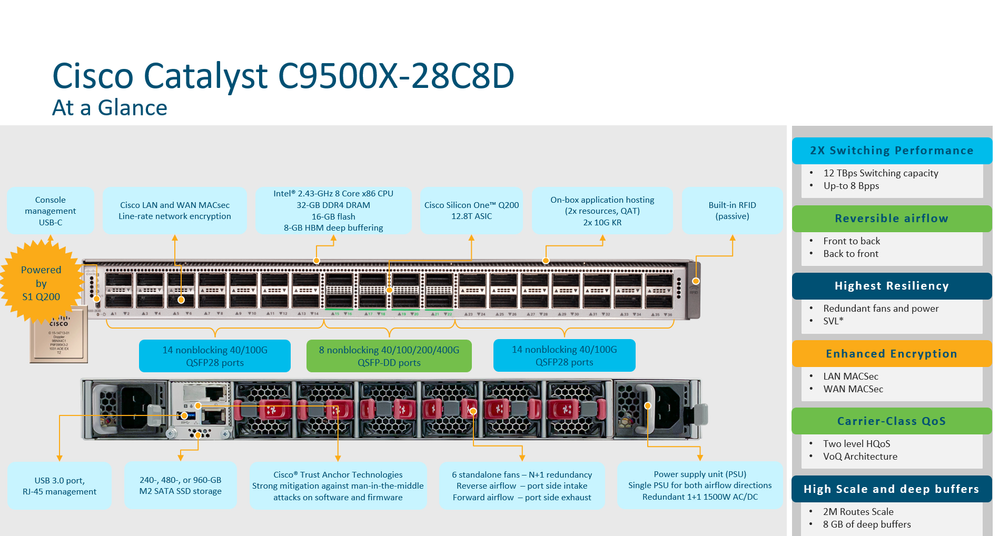 Highlights of the Catalyst 9500X-28C8D include:

Accounting for different installation requirements, the Catalyst 9500X-28C8D is the first Catalyst 9000 series switch to provide two different directions for airflow – Back to front (port side exhaust) or front to back (port side intake) Two different fan tray units are available for order as per requirements. Enhancements to the design allows the same power supply to be used for both directions. The power supply fans switch the direction of airflow depending on the direction of the fan inserted. 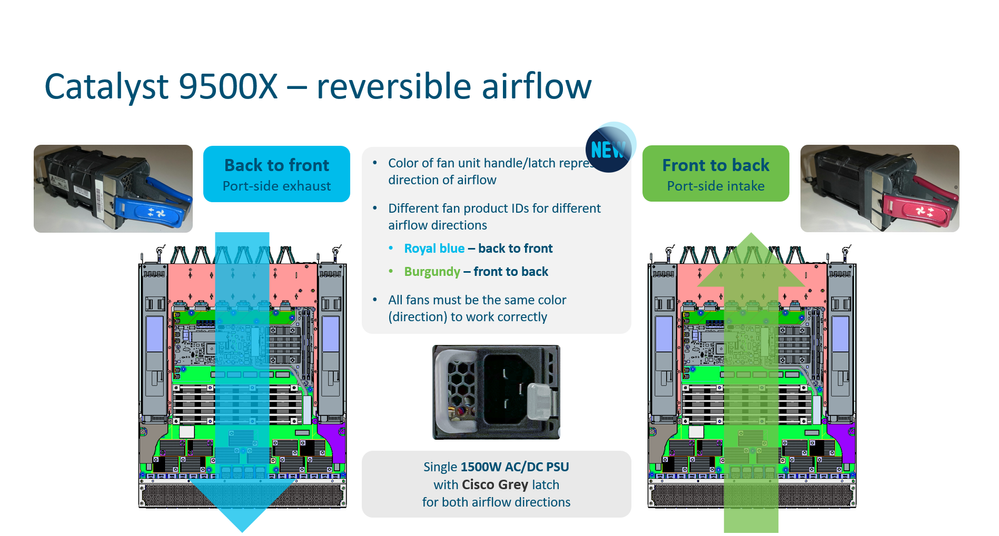 The new Catalyst 9500X-28C8D is built on a multi slice-based ASIC design with a Virtual Output Queue (VoQ) forwarding architecture. This design allows Network Processing Units (NPU) to operate independently in "Slices" with cross-communication over a crossbar "Fabric". This evolves the multi-core ASIC design used in UADP 2 and UADP 3.0 based Catalyst 9500 series switches.

To address the unique queuing challenges of campus edge devices, the design uses a forwarding architecture that uses a credit-based system for forwarding traffic by building Virtual queues between each ingress and egress interfaces independently. This design eliminates Head of Line (HoL) blocking which is illustrated in the figures below. 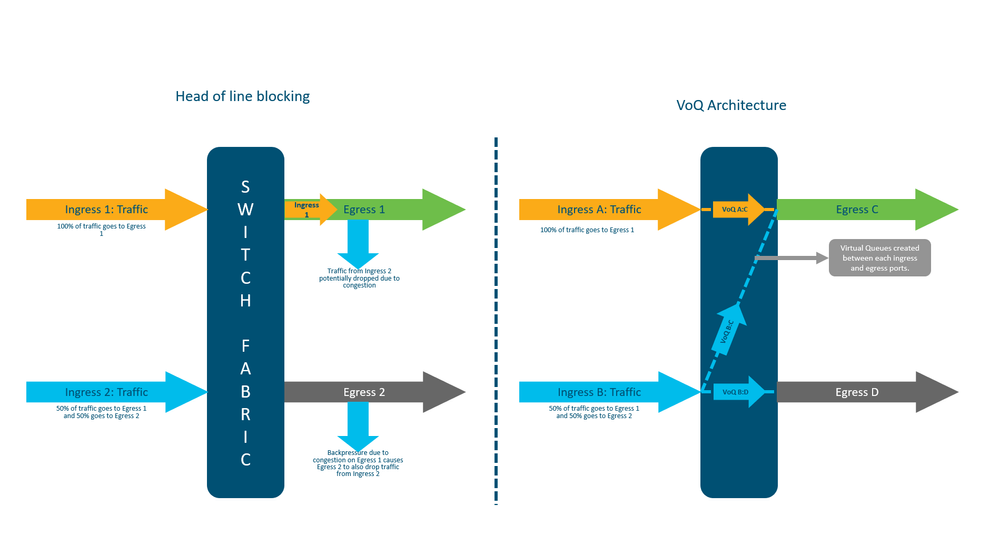 To also address the speed differences typically seen in Internet Edge devices, the Catalyst 9500X-28C8D boasts of impressively deep buffers. The switch has 80 MB dedicated buffers which enables low latency queueing for priority packets. The switch also has an additional 8 GB of on-demand High Bandwidth Memory (HBM) buffers which can be accessed to queue packets in case of speed mismatches between ingress and egress or to support micro-burst sensitive flows. 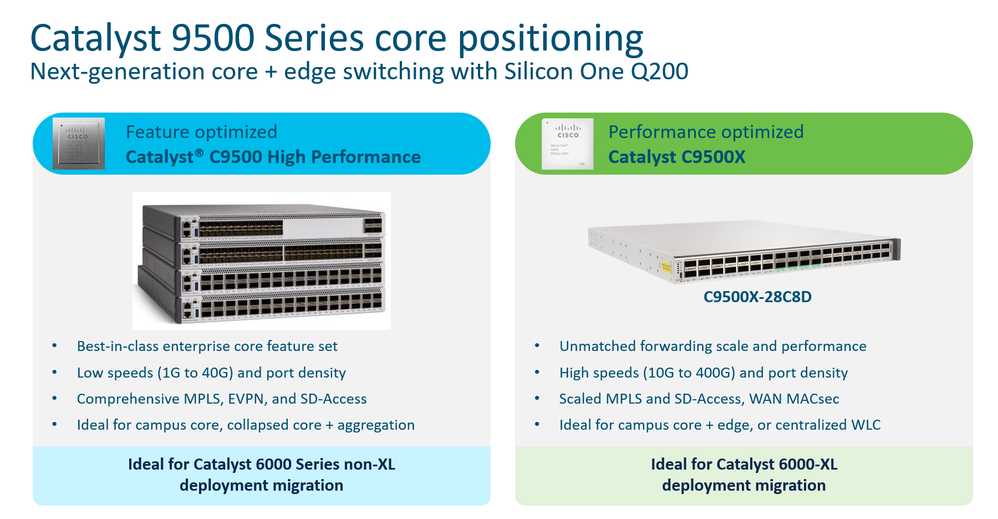 Latest Contents
"system mtu jumbo" command in CGS2520 switch
Created by wingccw on 07-02-2022 11:54 AM
1
0
1
0
Dear all, May I know if the "system mtu jumbo" command will appear in the "show running-config" of a CGS2520 switch please?  Or it will be hidden from the IOS config files? Thanks for your attention in advance!
BGP Routes missing in IBGP neighbors
Created by theBGPguy on 07-02-2022 10:04 AM
6
0
6
0
I have a simple scenario as in the diagram:I am advertising a route 40.40.40.0/24 from R4 to AS 100. When I verify BGP table in the R1,R2,R3:R1#show ip bgpBGP table version is 8, local router ID is 1.1.1.1Network Next Hop Metric LocPrf Weight Path* i... view more
How am I able to ping across trunk?
Created by hfakoor222 on 07-02-2022 04:55 AM
3
0
3
0
Thought just occured to me as to whether or not I should be able to ping acorss this trunk portswhile doing this lab  In doing a HSRP lab between the switches I recognized there needed to be communication between the switches to elect the active... view more
ASA 1140 fail over scenario involving 9300s
Created by JamesSimpson34554 on 07-02-2022 04:18 AM
2
0
2
0
Hi All  I have 2 x Cisco 1140 Fws running in ASA mode. Active/Standby 2 x 9300s with a trunk between ten Cisco have depreciated the Redundant interface on the 1140s I have configured sub interfaces on one of the ports of FWs with ... view more
IGMP querier
Created by ShKhan on 07-02-2022 01:54 AM
5
0
5
0
Dear All,   Can I point all switches to one querier in the l2 multicast network? Attached is the sample topology with each device config pointing to one switch NXOS1, which is the querier, or other devices will discover the querier NSOX1 vi... view more
Ask a Question
Create
+ Discussion
+ Blog
+ Document
+ Video
+ Project Story
Find more resources
Discussions
Blogs
Documents
Events
Videos
Project Gallery
New Community Member Guide
Related support document topics