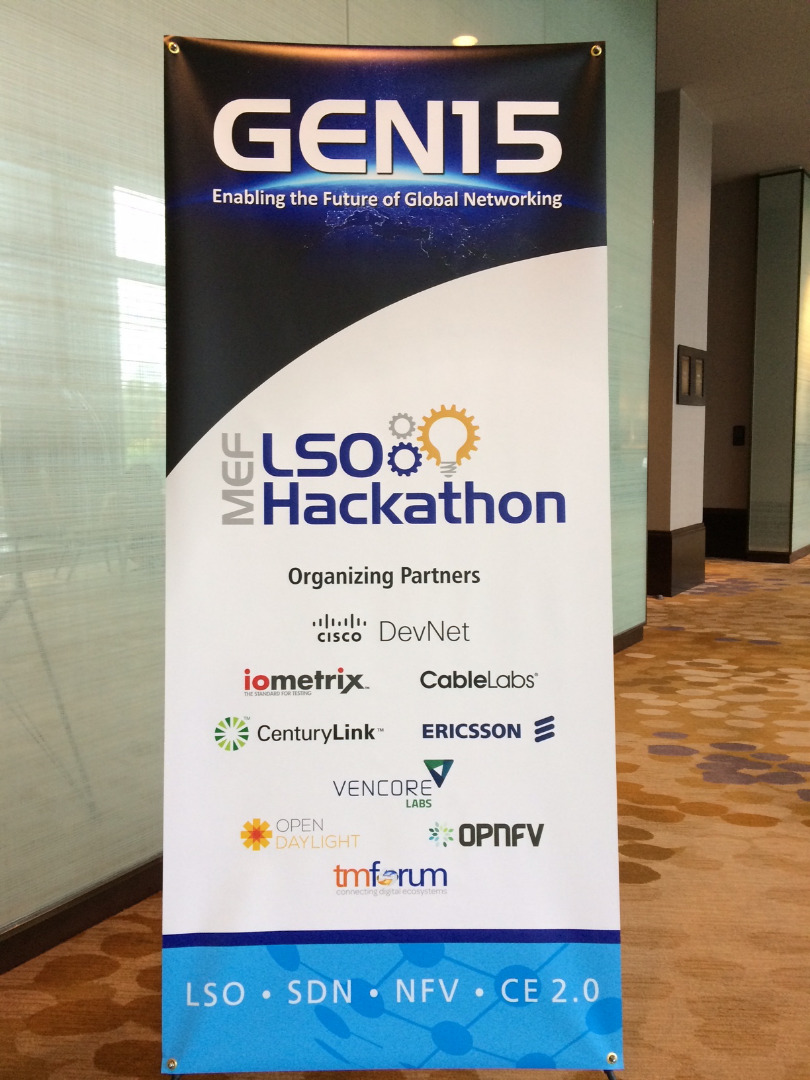 The first ever LSO hackathon was held November 17-19 in conjunction with the GEN15 conference, hosted by the Metro Ethernet Forum (MEF), in Dallas, TX. GEN15 is the MEF’s marquis event for the year, drawing networking professions together to enable the future of agile and orchestrated carrier grade services powered by LSO (Lifecycle Service Orchestration), SDN, and NFV.  With the support of Cisco DevNet, the MEF added a critical element this year, a hackathon aimed at accelerating the development of LSO architecture, its corresponding APIs, and adding support for those APIs into key open source projects that provide the foundation of the architecture. 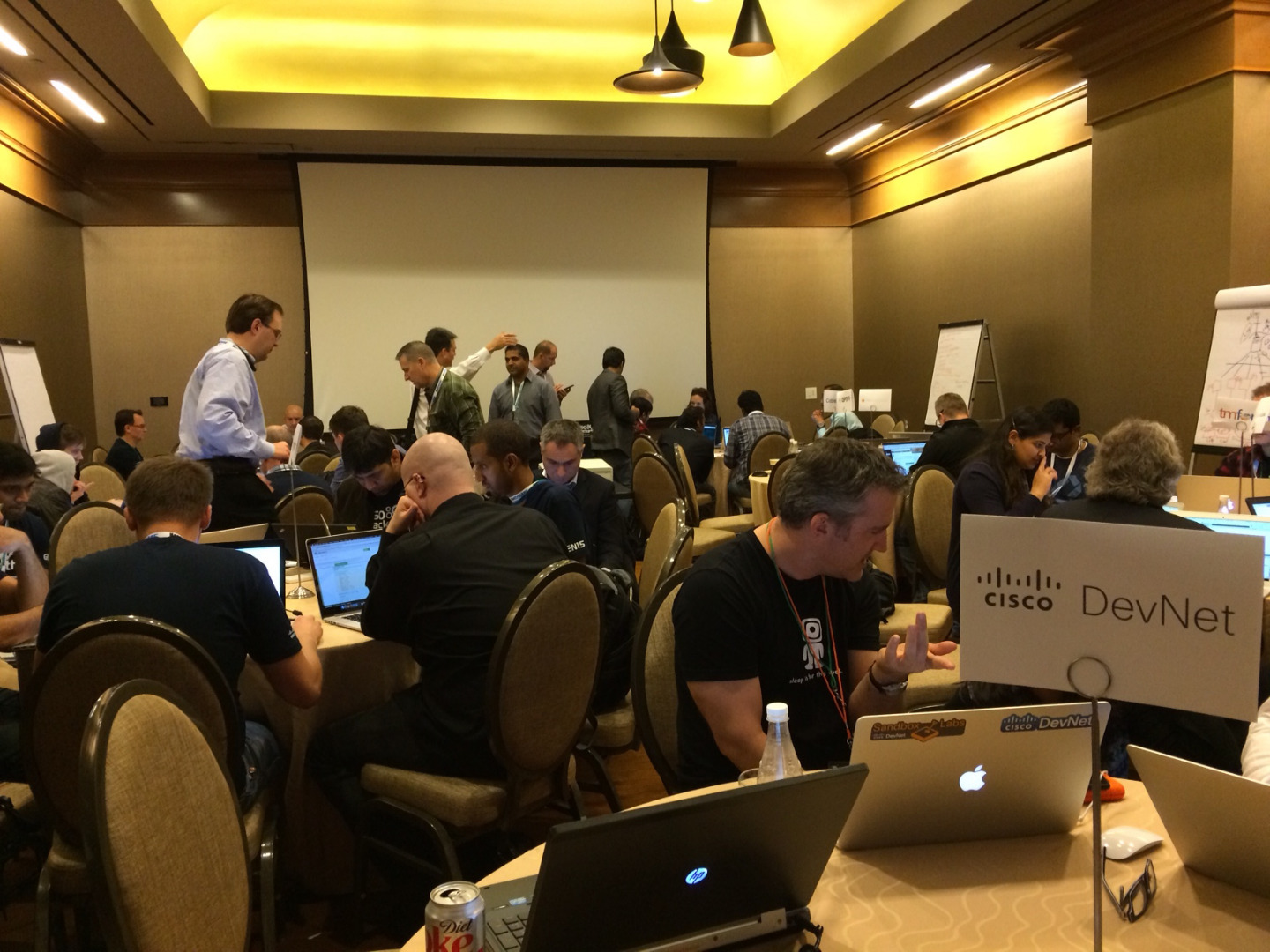 The event started with a workshop Monday afternoon to introduce participants to the LSO architecture and the aspects of it that served as the focus of the hackathon. That was followed by a series of brief technical presentations by experts of on each of the proposed projects. Participants were also introduced to the LSO hackathon network, consisting of a set of VMs to host applications and connected to CE 2.0 network gear to facilitate running real traffic through the setup. 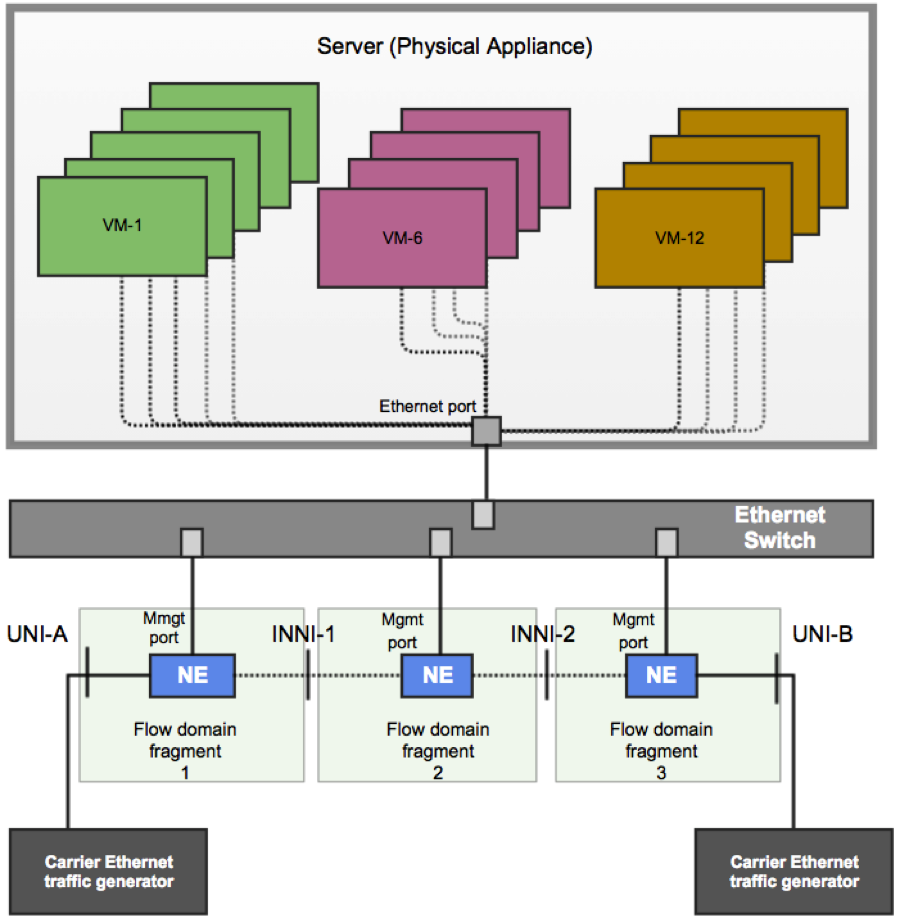 Now sufficiently acquainted with the technologies and proposed projects, participants broke up in the teams that best matched their skillset and interests. The room was a bit crammed but this had its benefits as participants quickly found homes in one or more projects. Most teams included people from multiple companies and a combination of open source developers and authors of related standards and APIs. To capitalize on the networking and relationship building opportunity, all hackathon participants were then invited and encouraged to step away from the laptops, servers, and routers and join the rest of the GEN 15 conference attendees in the Networking Hall for the Welcome Reception.

The hackathon officially restarted at 9am the next morning. Many eager hackers were there well before that to dive into their new endeavors with their new friends. By design, the atmosphere was more collaborative and cooperative than competitive. Teamwork and the opportunity to move the industry forward were motivation enough, not to mention a constant flow of great food and caffeine in all the favorite forms. 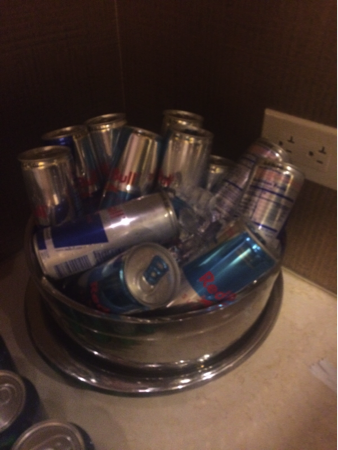 Cisco DevNet addressed clothing needs with commemorative t-shirts. Equally critical were developer VMs on USB drives that enabled participants to quickly instantiate a development environment tailored to their project quickly on their own laptop. 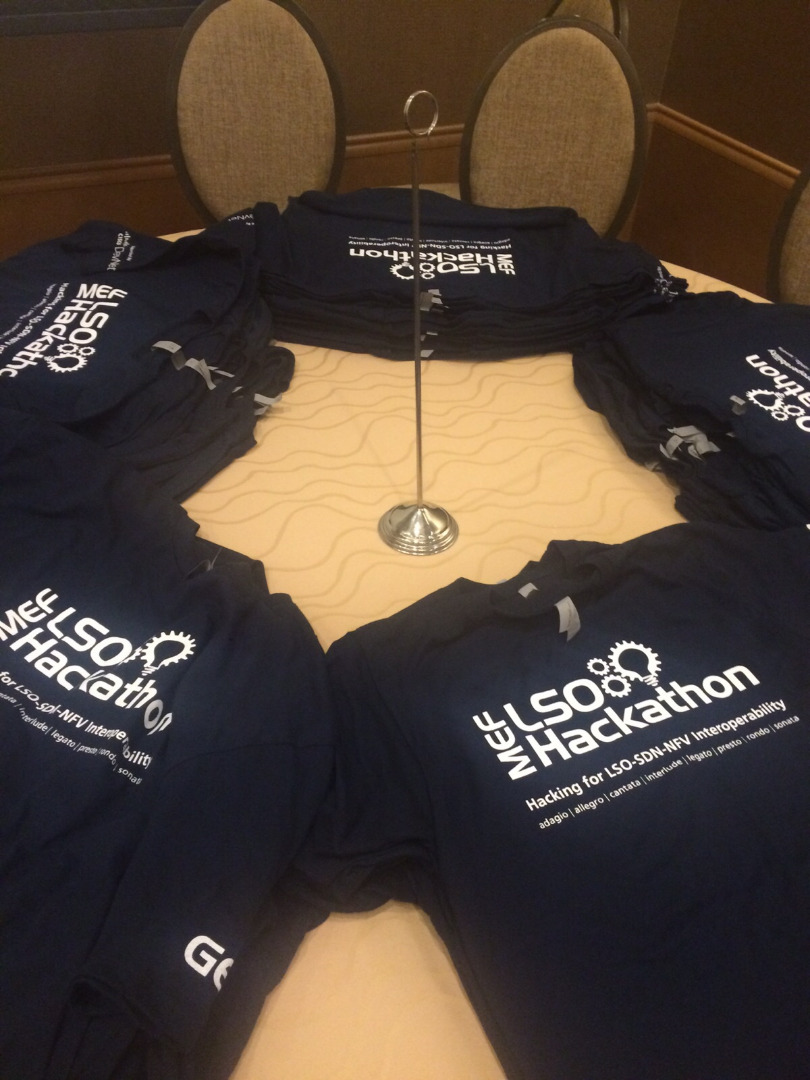 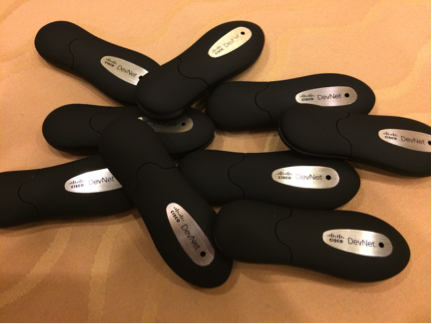 Teams worked well into the evening. Around 7pm, many accepted to the call of a cocktail reception, proceeding to hash out the more delicate debates within their teams over a beer or two. Some preferred to code away until the doors officially closed around 9pm.

We started bright and early again on Wednesday. The previously agreed upon and ever looming deadline of 3:30pm inspired many to the hackathon room before even the coffee had arrived. Distracted only briefly by another decadent lunch buffet, teams worked efficiently, demonstrating time management skills second only to their coding abilities. The justification for the 3:30pm deadline was to ensure teams took adequate time to prepare a brief summary presentation of what they had achieved of the course of the past 2 days. These presentations were given to the hackathon participants and an ad-hoc group of onlookers who were curious to see firsthand why there was so much talk and excitement in the GEN 15 meeting about this first even hackathon. A brief summary of the projects is a follows:

In addition to the obvious learning through sharing, the presentations guaranteed that the great work everyone did and the lessons learned along the way benefit the larger community and extend well beyond the limited timeframe of the hackathon itself. Additional information on the hackathon and projects is available now through the hackathon wiki. A more permanent more is being created, and some of the code is already being prepared as upstream contributions into OpenDaylight and OPNFV, both as bug fixes and as contributions to the OpenDaylight UNI Manager project and the  OPNFV Connectivity Services LSO (LSOAPI) project.

Rome was not built in a day, nor was the entire LSO architecture implemented at the hackathon. It did jumpstart this endeavor. Not only that, it was instantly viewed as successful enough to warrant a complete series of LSO hackathons, the next one being held in conjunction with the MEF Q2 2016 meeting April 25-28 in – you guessed it, none other than Rome, Italy.

You can be sure myself and Cisco DevNet are already on board. Mark your calendars – we look forward to seeing you there!

If hackathons to advance the pace and relevance of open standards through open source is up your alley, check out this post about IETF hackathons.

Latest Contents
ENSA Final Skills Exam (PTSA)External tool
Created by aliqs95 on 06-25-2022 02:05 PM
0
0
0
0
Hi,Is there anyone who has completed the ENSA External Final Skills Examination (PTSA) instrument certification?I have some questions about the test
NETMIKO to cisco
Created by Dhikra Marghli on 06-24-2022 01:10 AM
4
0
4
0
Hello   I wantto use language python Netmiko  to add some commands to 400 router cisco !!   for me it the first time i use pyhon Netmiko   so    i have switch layer  2 2960 cisco have username admin and password admin123... view more
IOS-XE telemetry doesnt work
Created by EdvinasKairys11982 on 06-21-2022 03:08 AM
6
0
6
0
I'm trying to run simple monitoring with Telemetry, by looking at this video: https://www.youtube.com/watch?v=erTyK0WDsT0&t=2556sI've configured everything, but Cisco device doesn't send any packet to the receiver. The server side uses Influxdb +... view more
TRex tool test the Maximum TCP Connection Establishment Rate
Created by Helsing on 06-21-2022 01:15 AM
0
0
0
0
Hi guys， I wonder how to use the TRex tool to test DUT's Maximum TCP Connection Establishment Rate and Maximum Concurrent TCP Connection Capacity？My DUT is a business router, I wan... view more
Suggestions on the importance of learning Python over Linux ...
Created by hfakoor222 on 06-17-2022 11:22 PM
8
0
8
0
I'm going to be moving on to learning either Linux or Python or both and I am unclear on how deep to learn either one or both. I've asked this question before and it's been suggested to learn Python over Linux as a network engineer, but isn't Python deplo... view more
Ask a Question
Create
+ Discussion
+ Blog
+ Document
+ Video
+ Idea
+ Project Story
Find more resources
Discussions
Blogs
Documents
Events
Videos
Ideas
Project Gallery
New Community Member Guide
Related support document topics