Welcome to the new Cisco Community. LEARN MORE about the updates and what is coming.
Turn on suggestions
Auto-suggest helps you quickly narrow down your search results by suggesting possible matches as you type.
Showing results for
Search instead for
Did you mean:
Create a new blog
10386
Views
24
Helpful
1
Comments

Multicast for the heart Part I: IGMP

Disclaimer: This post does not cover platform specific understanding/troubleshooting of Multicast. It covers IGMPv2 from a platform independent, technology point of view.

I've always avoided Multicast like the Plague. There I was, one fine day, working on a case when the main concern was found to be due to an underlying multicast problem. Naturally I had to have someone else work the case from here on. Another engineer took over the call and had it fixed in no time. His explanations and methodical approach were fantastic; since then, I have been inspired to learn this technology to the best of my abilities.  This post, and the ones that follow, will hopefully help someone transition into this technology with ease and add value to their multicast studies.

The concept of multicasting is best understood by how radios and televisions stream data. They send data to a specific channel/frequency; end users that wish to receive this data then "tune" into this channel/frequency.  Multicasting is thus the transmission of information to a group of receivers. The source of a multicast stream does not necessarily need to know who the receivers are; the receivers need not know who the source is.

When I started out, I'd hear a lot of IGMP and PIM being thrown around but I was never sure what these protocols were, what they were used for and what was the necessity for both of their existence. Let's break that down now:

Now that we've got that out of the way, the remainder of this post focuses on IGMP (IGMPv2), the communication between a host that wishes to receive traffic for a specific multicast group and a multicast router. I'll use the following topology to walk through the working of IGMP: 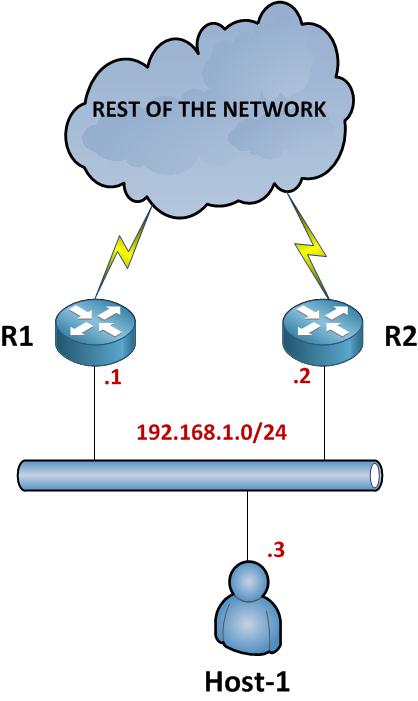 In our topology, when Host-1 comes up and decides that it wants to join the multicast group for 230.1.1.1, it sends out an unsolicited membership report that is destined to 230.1.1.1. This informs R1 and R2 that there is a host on their Ethernet segment that wishes to join that specific group.  The question, that then arises, is how this host maintains its join status in the group? Does it continuously send out unsolicited reports to the routers at every X interval? Well, not exactly. It is the routers job to continuously poll to check if there are any hosts that wish to receive multicast traffic. This is done by sending out 'Query' messages. A host interested in receiving data then sends membership reports in response to a Query.  A query is sent out every 60 seconds by default.

In our topology, there is more than one router on the same LAN segment. It wouldn't make sense for both to continuously send queries on this segment. That would be bandwidth and router resources being wasted. In such cases, there is a single 'querier' chosen from all the routers on the segment. It is the querier's responsibility to, well, send out queries. The querier election is fairly simple. Let's understand this using our topology.

We can confirm this with the following:

FastEthernet0/1 is up, line protocol is up

IGMP is enabled on interface

Multicast routing is enabled on interface

Multicast groups joined by this system (number of users):

There is a bunch of useful information that can be derived from this command:

You can see from the timestamps that a general query is being sent out every 60 seconds.

The above tells us exactly who sent a membership report and for which multicast group address.

Suppose, in our topology, there is more than one host in the Ethernet segment. When these hosts receive a Query from the router, each of them sets a delay timer to a random value between 0 and the Max Response Time (this is specified in the Query messages and is 10 by default). When this delay timer expires, the host sends out a membership report for every group that it wants to join/remain subscribed to. Naturally, one host will have its delay timer expire first. When the other hosts hear this membership report (all hosts that are subscribed to the same group will hear it since these reports are destined to the group address itself), they reset their delay timer and back off from sending a membership report for the same group. This process is also commonly referred to as 'report suppression'.

The concept behind report suppression is that a router does not need to know exactly how many members wish to receive traffic for a specific group and/or who exactly those members are. As long as there is at least one host that wishes to receive traffic on that segment, it will continue to send data on that segment.  Report suppression also helps avoid unnecessary flooding of membership reports in a segment.

Say, there were another host, Host-2, connected to this LAN segment. R1 sends out a general query that reaches both these hosts. The point of the 'max response time' is to let the hosts know that they need to set their delay timers to a value between 0 and max response time. With a debug ip igmp on both Host-1 and Host-2, let's see what they do when they receive a general query.

From the delay timers set, we can safely assume that Host-2 will be sending a membership report before Host-1. Host-1 should get this and suppress it's report. This is exactly what happens:

Let's now understand what happens if a host decides to leave a group. Unlike IGMPv1, IGMPv2 incorporates a new type of message called the 'leave group' message.  When a host leaves a group, it sends it's local router a leave group message. This is destined to 224.0.0.2, the 'all routers' address. The reason being that other members of the group need not be aware of when another member leaves the group. The leave group message is nothing but a membership report with the type code identifying the message as a leave group message.

Based on how the multicast application has been coded, we can have every host that leaves a group send out a leave group message, however RFC 2236 recommends that a leave group message be sent out only if the host was the last to respond to a query message. This helps throttle down the queries a little bit. Other members of the group can leave quietly and the router continues to forward traffic to that segment.

Another thing to note, when a router responds to a leave group message with a query, the query is not a general query. This query is destined to the group that the host is leaving (as identified by group address in the leave group message) and is thus known as a group specific query.

Let's understand this with another lab example. I will make Host-1 leave this group:

On R1, with a debug ip igmp, we see the following:

Before we wrap up, let's have a look at each of the IGMP packets:

From the above packets we can see that the packet format remains the same for all IGMP messages. A general IGMP packet format, thus, would be: 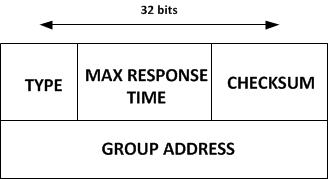 The 'type' is used to identify what kind of packet it is:

I hope this was informative.