Cisco's latest release of the IOS-XE train – IOS-XE Cupertino 17.7 on December 15, 2021, brings an expansive list of robust features and enhancements to current networking technologies. Along with the addition of new hardware to the EN Routing portfolio.

The ISR 1130 Series. The 1130s have full feature parity with the rest of the ISR1K platforms; they come with eight built-in switch ports, optional pluggable LTE modules that can support the speeds of CAT 4, CAT 6, and CAT 18, with 5G on the roadmap, slated for mid-2022 compatibility.

While specifications seem in line with predecessors, a key differentiator for the 1130 series is it is the first router in the EN portfolio to support Wi-Fi6. The unit has an embedded access point with a built-in wireless controller to manage the AP; alternatively, the AP can be configured to reach out to a centralized wireless controller. Finally, the ISR 1130 supports vManage, DNAC on-prem, and a local WebUI for network management.

WiFi6 has helped make our smart devices even more intelligent. We are seeing more IoT devices being deployed today than ever before. From factories, hospitals, enterprise buildings, there are many small IoT sensors counters that show a significant improvement when operating over WiFi6 compared to WiFi5. These advantages can be implemented over to any type of deployment running on Wi-Fi 5 today. The ISR 1130s will help drive this adoption of Wi-Fi 6 across enterprise networks. 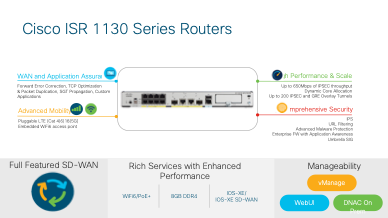 In the following sections, we will discuss new software features that this release brings to ISR1000/4000, ASR1000, and Catalyst 8000 routing platforms. Below is a high-level list of features/ enhancements that span Layer 2, Layer3, Multicast, and Virtual Platforms. 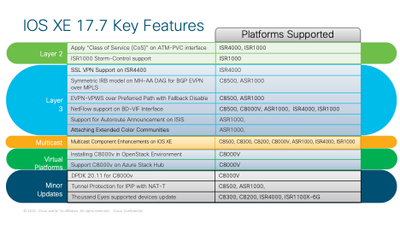 "CoS" or Class of Service

As many are aware, "QoS (Quality of Service)" is used to allocate bandwidth to several types of traffic across the network. It helps reduce packet loss, latency, and jitter. It is implemented with the Class of Service information from Layer 2 – which marks each packet with a priority level and at Layer 3 via the DSCP values.

Why is it implemented?

The command that is used to apply Class of Service is "set cos-inner," followed by a number from 0 to 7 based on the priority. However, the set cos-inner command applies to a QinQ VLAN – which means the packet should have 2 VLAN tags which were acceptable for an ethernet interface, but the packet sent over the ATM interface is a dot1Q packet that has only one VLAN tag.

So, a new command has been introduced in 17.7. The "set cos" command is followed by the priority value to overcome this issue.

A storm occurs on the LAN when we have an overflow of packets that cannot be processed fast enough. This storm causes some packets to drop, resulting in network performance degradation. 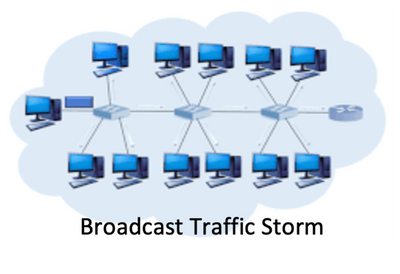 Why does it matter?

Using storm control, we can prevent useful traffic from being disrupted, by configuring a threshold level for each traffic type – that is a separate threshold for broadcast, one for multicast, and one for unicast traffic; so that if a broadcast storm occurs, only broadcast traffic is discarded but any unicast or multicast traffic is passed through the LAN network.

SSL VPN allows remote users to access enterprise network resources over the internet through a secure VPN tunnel, commonly using a software client like AnyConnect. However, SSL VPN was only supported on CSR1K and Catalyst 8KV.

From 17.7, we have extended SSL VPN support to the ISR4K series, on the 4431, 4451, and 4461 platforms. This is implemented by creating one virtual access interface per SSL VPN session.

Currently, the restriction is that this feature is not supported for IPv6 or SD-WAN.

The next feature on the list is the Symmetric IRB model of MH-AA DAG for BGP EVPN over MPLS. What a mouthful! Let's break it down!

Symmetric: Both the Provider Edges will equally share packet processing associated with the client.

DAG: Distributed Anycast Gateway. It is an addressing mechanism that allows the client to connect to both PEs as its default gateway.

Symmetric routing and bridging over distributed gateways are already supported for SINGLE HOMING. But in a multihoming setup, traffic from the host may go through either PE 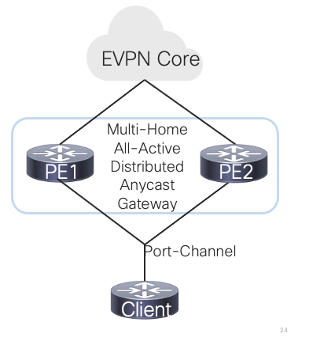 The restrictions for this feature are that Segment Routing on Demand Next Hop policy is not supported, we only support static policies in this release; Per Flow Policies are also not supported; only per destination policy support is available.

In 17.7, we can use the IP flow monitor command to configure FNF (Flexible Netflow) on this interface. In terms of performance and scale, we support 100 BD-VIFs per Bridge Domain on the ASR 1000 and 16 BD-VIFs on the ISR4000 per bridge domain

Support for Autoroute Announcement on ISIS

AA is a steering mechanism that can direct some traffic away from congested links and better utilize the network. AA is performed by using CrossWorks Optimization Engine (or COE). COE provides real-time network optimization, which we can use to send Segment Routing Traffic Engineering policies. The Path Computational Element (PCE) and COE compute a suitable path to divert flows and alleviate congestion.

BGP uses color and next-hop prefix information to create an SR Policy and automatically steer traffic to the destination. The color of a route is specified by its color extended community attribute, and it can be used to indicate specific treatment.

From 17.7, 4 new techniques to assign color have been introduced, allowing greater control, and providing flexibility to the SR-TE policies. This is done using Export VRF, Import VRF, Neighbor inbound, and source-protocol prefixes.

To improve product usability and manageability, various enhancements have been made to Multicast components on IOS XE. The release of 17.7 includes support for retrieving control plane information for a multicast route; YANG model enhancements for 583 CLIs for IPv4; and supports debugging up to 8 VRFS at the same time.

OpenStack is an open-source cloud infrastructure software that is used by many customers as a hypervisor manager to host virtual machines, including the C8000V.

From 17.7, C8000V VMs (Virtual Machine) can be installed by using a simplified workflow called a "Heat" template. This allows for Day-0 configurations to be added to the router to boot in Controller mode or Autonomous mode as needed. The supported Formats for Day-0 configuration are: iosxe_config.txt, ovf-env.xml, ciscosdwan_cloud_init.cfg.

Support for the Catalyst 8000v on Azure Stack Hub

Using the Azure Public Cloud instance, there is a well-established process to bootstrap Catalyst 8000v devices, using the Azure Meta-Data Service (AMDS), which is a cloud-only feature, that provides the Day-0 configuration files to C8Kv.

Ship in "install mode" instead of "bundle mode"

In previous releases, images were installed using a .bin file. The router would go through various images before locating the correct one for that device and then boot up. Also, when inserting a new module or chassis, manual intervention was required to get the new switch running on the same version as active switches or modules.

Additional updates that come with the release of 17.7 will bring the C8000V platform up to date with DPDK 20.11, which will address defects, performance, and potential new driver support. The software also includes a Bug fix to Tunnel Protection for IPIP with NAT-T to support features on IOS XE routing platforms. Finally, Thousand Eyes support is brought to the ISR1100X-6G.

A unified software release for Enterprise Networking, 17.7 brings support for new software features and enhancements to numerous routing technologies. Further, 17.7 brings the introduction of the ISR11030 series to the EN routing portfolio aimed to empower the increasing demand for Wi-Fi 6 network deployments. This software enhancement will ensure Cisco's EN technology and platforms can meet the evolving demands of customer networks across various industries.

Please check below for a complete list of features, Release notes, and Configuration guide related to the 17.7 release.

Latest Contents
DMVPN QOS in HUB
Created by waleed_matter on 06-25-2022 01:56 PM
0
0
0
0
I have DMVPN QOS implemeted in one tunnel associated with one physical ISP and it worked fine between the HUB and spoke , my question there will be new ISP will connect the hub and new tunnel will create it so my question can i use the same group names wh... view more
Question Regarding Management Ports
Created by ohanquels on 06-25-2022 04:12 AM
2
0
2
0
I purchased a refurbished WS-C3750E-48PD 48 port PoE gigabit switch for $170 with a 1 year warranty. It has the latest IOS version of 12.2(55)SE12 running image C3759-UNIVERSALK9-M.When I first got it and fired it up with a console cable attached it start... view more
Vlan Internet
Created by pistorioed on 06-25-2022 03:58 AM
3
0
3
0
I have created several VLANs, specifically VLAN 10 receives the internet from a Telecom router with address 192.168.1.1. The problem is that only the vlan in question browses. The others, despite having activated IPV4 Routing, do not receive a connection.... view more
3750G internet access on routed port but no other ports
Created by AxL1971 on 06-25-2022 03:52 AM
3
0
3
0
I have a 3750G that has been reset to factory default and very basic setup done so far Port 24 is set as no switchport and connected to my ISP router. I have so far set this port up as DHCP and gets IP address from the ISP router. From the switch I c... view more
cant emergency install c9300-24t
Created by iMufiyan on 06-25-2022 02:06 AM
6
0
6
0
Hello,I accidentally factory reset my Cisco C9300-24T. Then I tried to fix it with emergency installation.Then I got this problem: Reading bundle usbflash0:cat9k_iosxe.16.09.01.SPA.bin...Validating bundle usbflash0:cat9k_iosxe.16.09.01.SPA.bin...Inst... view more
Ask a Question
Create
+ Discussion
+ Blog
+ Document
+ Video
+ Project Story
Find more resources
Discussions
Blogs
Documents
Events
Videos
Project Gallery
New Community Member Guide
Related support document topics