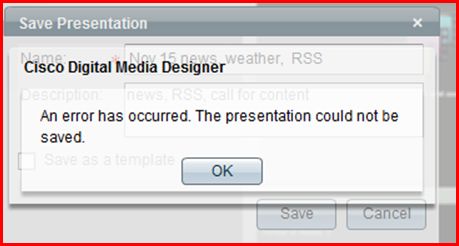 I tried to save a presentation with a new name and I keep getting this error.  Any suggestions?  I'm using 5.2

What is the NAME that you are trying to use

when saving the new presentation?

It looks like you are trying to save name with

If this still fails,  Try creating a NEW prezo from

and then try saving.

Let me know what you see

I tried saving as "Nov22"  with no spaces or punctuation.That did not work  Previously it was "Nov 15, news, RSS" and that worked fine.

I was able to save a blank presentation just now as "TEST".

So, I went back to my actual presentation and saved as "TESTT" that worked.  then I was able to save as "Nov22"

On the Nov22, I was changing playlists when I got the error.  I went back and undid all my changes and it still doesn't work.

This is not the first time I've experienced this. It's extremely annoying.  Also, occasionally, I get a message about unsaved changes after I save the presentation and then navigate to Preview.

any light you could shed would be helpful.

Cisco Employee
In response to RACotreau

Something in the "Nov22" that was changed is most likely causing

objects that are added that have something wrong with them.

As for the ask to save,  any  time something changes on the exisitng

presentation, you will be prompted to save.  Preview is like printing regular

docs. Even though things haven't changed when you print it prompts you

the "Nov22" document, you most likely need to open a TAC case

your setup via webex or via net.

a prior release when the DMS system was upgraded to 5.2.   In most

cases, Recreating the prezo in a NEW prezo in 5.2 usually solves the

issue and prevents new issues from occurring or re-occurring.  I know

the prezo is not that bad of an ordeal.

After you logged in to your server, how much time elapsed until you tried to save your presentation?

If you leave DMD open overnight or for hours at a time when you aren't actually using it, I suspect that your sessions might be timing out.