I installed CSR1000v router on my hyper-v with demo license AX 2,5gbps and I tried some throughput test. During testing (around 600MB/s should be 900+) I discovered that one core is fully loaded when others are not. VM router have assigned 4 vcpus but I tried with 8 and the same effect.

So it looked like I found a problem but when I tried change vcpu allocation by command (config):platform resources data-plane-heavy I write changes and reload router but still for some reason cpu share is the same: 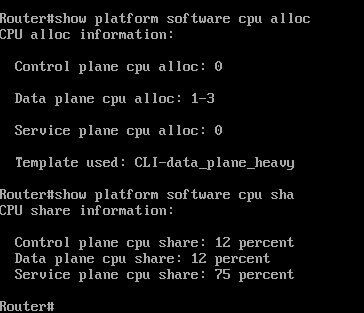 On this output you can clearly see that cpu allocation changed but cpu share is still the same.