Cisco Community
English
Register
Login
We're here for you! LEARN about free offerings and business continuity best practices during the COVID-19 pandemic
RegisterLogin
Options
Turn on suggestions
Auto-suggest helps you quickly narrow down your search results by suggesting possible matches as you type.
Showing results for
Search instead for
Did you mean:
981
Views
15
Helpful
8
Replies
Highlighted

Do I configure HSRP on Router and L3 switch respectively?

First of all, please see the below picture. 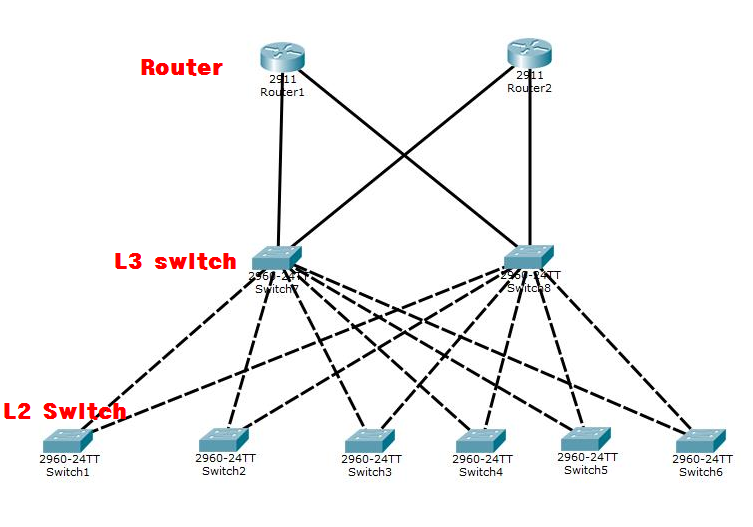 In this network design, I suppose to configure on Router and L3 switch.

I want to know below.

If not, please recommend more better.

2. I should configure HSRP on Router and L3 switches.

Do I configure virtual IP on Router and L3 respectively?

Ans: If you ask me as a Network designer, It needs more work. You will L3 switch in stack mode and use HSRP on Router only.

2. I should configure HSRP on Router and L3 switches

Regards,
Deepak Kumar,
Don't forget to vote and accept the solution If this comment will make help you!
5 Helpful
Reply

1. Stack mode : Is this meaning that connecting each other(L3 switches) ?

2. Could I ask you why I should configure HSRP on Router only...?

configure it on the router as there the wan facing devices

1. You should use GLBP instead of HSRP.

1 im not saying you have to use but think of it as an option if your using a FHRP , you can use both gateways at the same time with GLBP while in HSRP one will always be standby , Cisco equipment and ISP circuits are expensive to just have sitting in standby mode , using GLBP allows you to use everything at same time

1. Do I plan network design

If not, please recommend more better.

Assuming none of your 2960s support stacking, you would probably want a trunk between your two L3 switches  You might want such a trunk link to have more bandwidth then your other links (which might be provided by Etherchannel.)

You would want one or both of your L3 switches to be the active gateways.

You would want your L3 switches to be the STP root and backup roots.  The root for a VLAN should be on the same L3 switch as the active gateway.

2. I should configure HSRP on Router and L3 switches.

Do I configure virtual IP on Router and L3 respectively?

I would suggest not, as I've suggested using the L3 switches as the gateways.

I would suggest routing between the L3 switches and the routers.  There are several routing topologies that could be used, but perhaps just p2p on each L3<>2911 would be best.

In your opinion, I would want to know "p2p"

What do you mean by that?