Cisco Community
English
Register
Login
Join us in congratulating October's Spotlight Award Winners!
RegisterLogin
Options
Turn on suggestions
Auto-suggest helps you quickly narrow down your search results by suggesting possible matches as you type.
Showing results for
Search instead for
Did you mean:
2498
Views
30
Helpful
19
Replies

I want to use MSDP to exchange multicast sources between different customer network domains where no BGP is used but OSFP.

Each domain uses it's own two rp for redundancy with anycast rp (without msdp meshgroups). Multicast routing protocol is PIM-SM. Routers learn default route via OSPF from firewall (and few more routes not relavant for this scenario). Routers are Cat6K, Firewall is third party.

I want to use MSDP peerings in a hierarchical design like shown below. 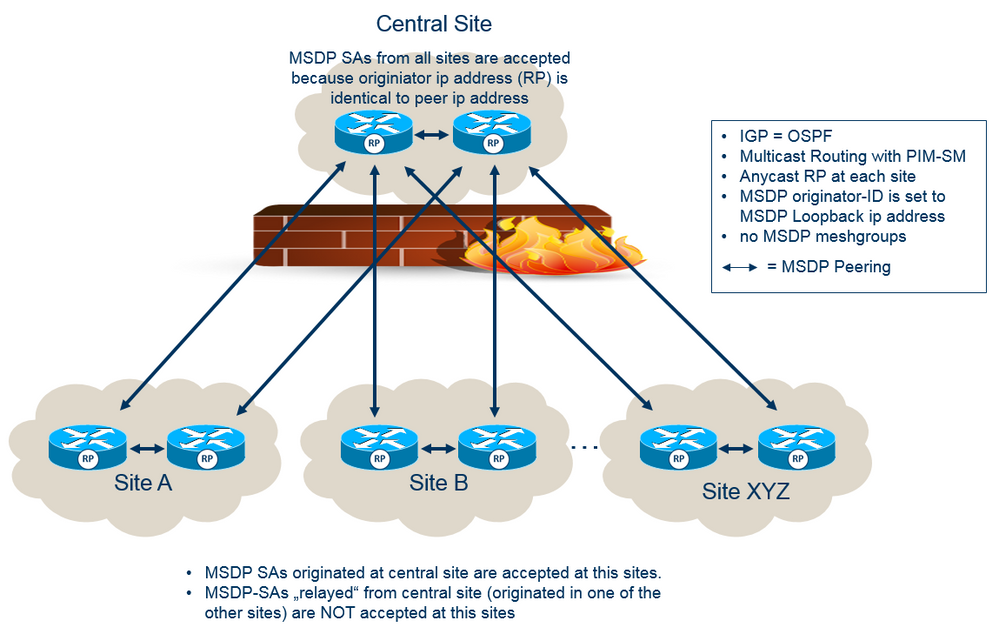 But MSDP SAs originated e.g. at site A (and "relayed" from central site) are not accepted at site B.

I played with local mesh groups between rp, originator id, and rfc3618 compliance activation, but I didn't find a working solution.

In debugging I see the following error message e.g. on site B router:

I read cisco documentation (https://www.cisco.com/c/en/us/td/docs/ios-xml/ios/ipmulti_pim/configuration/xe-16/imc-pim-xe-16-book/imc-msdp-im-pim-sim.pdf) and also rfc3618 and 4611.

In my understanding it seems that a scenario like this is not supported because of the Peer-RPF check which can not be successful here.

Does anybody know if it's possible to get MSDP working in this scenario?

Unfortunately using BGP is not an option.

I also thought about using a meshgroup between all rp but this does not scale well because there are several sites and many msdp peerings. Also SA filtering would be easy in the scenario above where it could be done at central site.

Thanks a lot in advance

Labels:
I have this problem too
0 Helpful
Reply
19 REPLIES 19

You say that each pair of multilayer switches C6500 is learning a default route 0.0.0.0/0 via OSPF from the firewalls and few other routes not related to MSDP.

The first suggestion is to find a way to propagate the MSDP endpoints addresses in OSPF to all remote sites so that an explicit specific unicast route exists for the RP address contained in the MSDP SA message.

This should allow the RPF peer check to pass, because it is evident that the default route is not considered a valid route for this check.

if the RP addresses are advertised as internal address you can use or modify an area filter-list command to have them propagated to other areas.

Unless you are using totally stub areas you should be able to use this method.

many thanks for your explanation.

Do we need explicit host routes (for each loopback ip address) or would be a network route (e.g /16) also sufficient?

At the moment we use ospf summary so that the firewall is learning only one summary route from each site, and loopback ip adresses for rp and msdp are part of this summary network.

What we need is that the firewall forwards this summary routes between the sites.

I think the summary routes can be enough to pass the RPF check as they are more specific then a default route.

>> What we need is that the firewall forwards this summary routes between the sites.

Yes I do agree on this.

we let the firewall forward the loopbacks of rp and msdp peers between the sites, so every msdp peer knows next hop for each other msdp peer or rp in its rib.

Debugging messages are the same:

Do you have any idea what else to check?

Dont't know if it's relevant but i'm using vrf technology so all routing stuff is done not in global routing but in seperate vrfs on the switches.

RPF checks may not use most specific routes first,  but it can prefer lower admin distance first.

I was referrring to this sentence

can you provide an example of an MSDP peer address of Site B as seen by RT1 of Site A ?

The provided output from central site address  looks fine and it is working  for MSDP, isnt it ?

site A has no MSDP peering to site B. They have only peering to central site, which plays intermediate peer role in this scenario. msdp peerings shown in the picture above

Central site accepts SAs from site A and B because Peer and RP are identical in the SAs. Outputs of sh ip rpf and sh ip route seem the same for me as the ones in site B RT1.

Central site RT2 also does not accept SAs from central site RT1 neighbor, they are directly connected. Seems there is a rpf problem in any case where peer and rp listed in a SA are not identical.

>> Central site RT2 also does not accept SAs from central site RT1 neighbor, they are directly connected. Seems there is a rpf problem in any case where peer and rp listed in a SA are not identical.

This is an interesting note confirmed by the following output:

For the moment, just to make a test what happens if you configure on RT2 something like:

you may prefer to use physical next-hops with IP PIM enabled on it.

according to RFC 3618 section 10.1.3 the RPF check on the peer and on the received SA message is done in the following way:

Looking at the sentence at step (iii) regarding link state IGP it is clear that it is not possible to satisfy this condition.

The IGP next-hop for a remote RP R contained in a SA entry is NOT the loopback address of the directly connected MSDP peer.

So the suggestion to try to use an ip mroute using as next-hop the loopback address of central site RT1 is much more appropriate then I thought before reading this.

So I would give a try to the following on Central site RT2:

I edited the picture, hope that helps. So Site A RT1 which is nearest RP for Source1 sends SA to local neighbor RT2 and to Central Site RT1 which both works fine -> because in msdp message rp and peer are identical.

Then Central Site RT1 forwards SA to local RT2 and Site B RT1. Both routers do not accept the SA, that's what we see in our tests.

I also read the rfc section you mentioned, and I can follow your explanation.

I configured both mroutes on Central Site RT2 but this did not help, I get exactly the same debug error messages:

Participant
In response to thorsten.steffen

just another idea: Would it help to use different msdp ip interfaces for msdp site interconnecing sessions? So use loopbacks for local anycast msdp peering, and SVIs/physical subinterfaces to connect to other sites?

On the other hand, this won't help for msdp communication between Central Site RT1 and Site B RT1 because next hop will be a local router and not remote msdp peer.

RFC seems very complicated to me and does not consider modern high availability enterprise networks. Maybe Full Mesh with mesh group is the only option to make msdp work in our environment

I am starting to think about this as the easier to manage option.

the new network diagram has much more details.

So you have tried to use ip mroute with no results.

>> I configured both mroutes on Central Site RT2 but this did not help, I get exactly the same debug error messages:

if this fails is because the next-hop = Loopback of RT1 central site is not a PIM neighbor for RT2.

The RFC has been published in year 2006.

I wonder what recent MSDP implementation they are referring to. I tried to look for more recent RFCs about MSDP but I couldn't find one.

You have written about a configuration option to be RFC3618 compliant. Can you try to enable it with the test ip mroute commands configured ?

Correct messages on central site router 2 and site B router 1 are:

Activating rfc3618 compliance does not change the behaviour, already tested it. Only difference I see is that debug messages are less detailed then.

It's independent of using redundant routers.

I'll try to build a gns3 lab to verify this.