Cisco Community
English
Register
Login
Make a difference. Your participation will help fund Save the Children. LEARN MORE
RegisterLogin
Options
Turn on suggestions
Auto-suggest helps you quickly narrow down your search results by suggesting possible matches as you type.
Showing results for
Search instead for
Did you mean:
1514
Views
35
Helpful
13
Replies 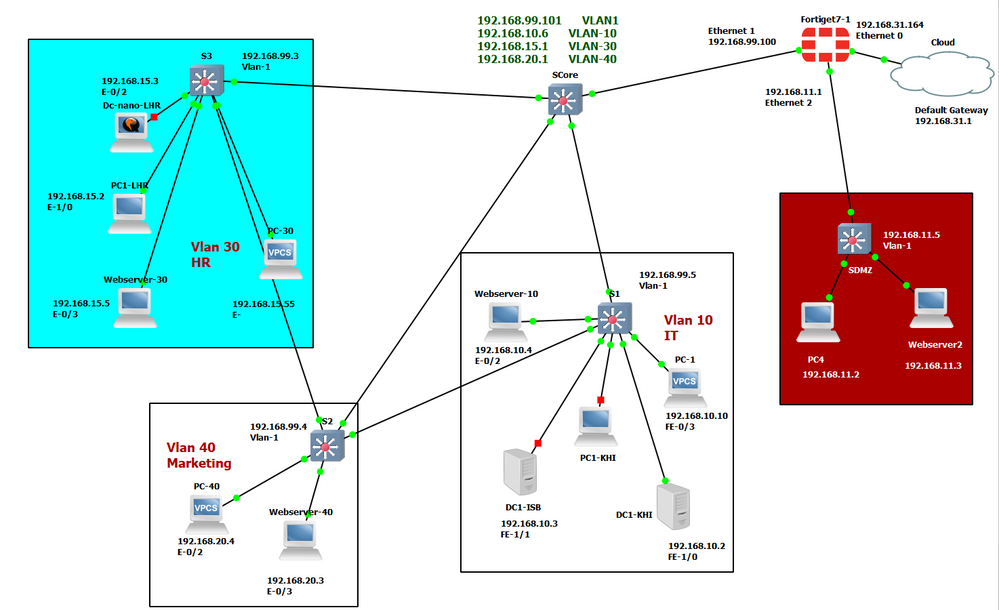 I doubt this can be a Fortigate issue as the Switches can access the WAN fine with their 99.0 subnets and they are in the same policy as the rest of the LAN subnets.

How can I allow access to the Internet to LAN Pcs.

Any help is appreciated as I am stuck in this for 2 days and going crazy.

can you post the running config of the Cisco core switch, as well as the config file of the Fortigate ?

Here is the config of core switch

as for fortigate config do you need the output of show full-configuration???? sorry i am a noob at fortigate.

I have attached images in the original post of the interfaces etc.

which switch model is this ? Usually, a layer 3 switch would have a line 'ip routing' in the config, do you have that enabled ?

It's is an old l3 image of a Cisco switch and yes the IP routing is enabled but not showing up in the config, it also doesn't show the switchport access vlan command but it works.

As I said in the original post all the vlans are able to connect to each other through this switch using IP routing.

All the switches also can ping and access internet using vlan 1 ips just not the client pcs.

can you ping the Fortigate from any of the other SVIs configured on the Cisco ?

How do you propose I do that, as the default route that is connected to fortigate is through vlan 1 ips i.e. .90.0. and to check other svis I might have to define a new route maybe?

Other switches can also access the Fortigate but they are also on vlan 1 so that doesn't count I think.

Sorry but I am still learning so it might be a bit frustrating for you but I am eager to learn.

on the core switch, type:

That basically pings the Fortigate from other vlans. Do you get a response ?

Just checked and no the other SVIs cant ping the 99.100 interface.

Thank you for the reply, I will try to answer your questions in bold below"

The subnets of the switches vlan 1 as well as the other vlans are in the same policy definition on the firewall so if one is working the others should too thats why I think its an internal LAN issue.

As stated above yes, I am attaching a pic of the LAN policy and DMZ

The firewall only has 2 simple policy defined, 1 is allowing Lan(All 4 subnets of LAN) to Access Wan and the other is allowing DMZ to allow WAN, the policy is is working for DMZ and the .90.X subnet of LAN but not for anything else

No I have specifically allowed ping request in the policy, pic attached below

EDIT: Also adding another picture of the policy allowing the 99.x series subnet

I Ran a wireshark trace and saw that the packets were getting rejected as they couldnt find the LAN subnets, add a static route back to the LAN ips on fortigate and solved the problem.

Thanks for the help guys.

VIP Mentor
In response to samipk1234

congratulations and thanks for the update

Please rate and mark posts accordingly if you have found any of the information provided useful.
It will hopefully assist others with similar issues in the future
5 Helpful
Reply

Hall of Fame Master
In response to samipk1234

thanks for your feedback that provides an happy end to your issue rated as it deserves.

Yes the Fortigate firewall needs static routes for internal LAN subnets with next-hop the core switch IP address on the common IP subnet ( 192.168.99.0 I guess and the next-hop to core switch should be 192.168.99.101)