If you want to find out whether random MAC is used, apply regular expression condition for RADIUS:Calling-Station-ID attribute to match ^.[26AEae].*. Initially you can assign same permission as real MAC address, but can decided to further employ additional controls if needed. For more information, please read Random MAC address - How to deal with it using ISE. 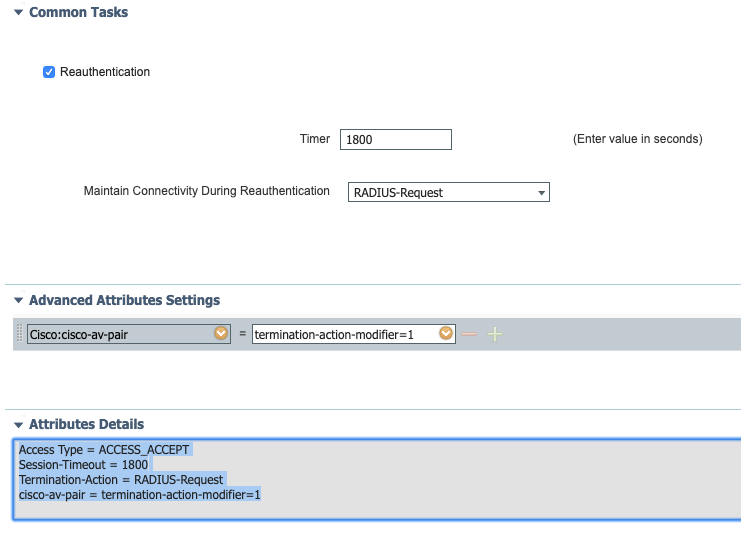 In the past there was no point of multi-auth mode with server dead action authorize combination as a single interface will not allow more than one data VLAN. So assigning a server dead VLAN that is different from interface VLAN or AAA assigned VLAN would result in odd behavior. However, that is no longer the case with certain Catalyst platforms. Relatively newer platforms allow different endpoints to be assigned different VLAN on a single interface and even the server dead VLAN may be assigned along with other endpoints on the same interface. This option provides best end user experience as pre-connected endpoints are not impacted during the server dead transition, only newly connecting endpoint during server dead event is moved to specified VLAN. Following platforms supports multi-auth mode with multi-dVLAN as well as Inaccessible Authentication Bypass (Critical Authentication) with authorize option:

Note: More information on the "Multi-auth Per User VLAN assignment":

There are certain use cases where admins would like to differentiate policy based on the physical interface that endpoints are connected to. For instance, specific ports are mapped to conference rooms and the admin wants to designate the ports for guest only access, but currently there is no easy way to let ISE know that certain ports are for conference rooms. In the case of wireless access, the SSID name is included in the Called-Station-ID field as a default, however, no such information can be sent for wired authentication for RADIUS access request. There is an open enhancement request (https://bst.cloudapps.cisco.com/bugsearch/bug/CSCvp20205) for IOS-XE to allow customizable information such as interface description or template name as part of RADIUS access request, but in the mean while, following work arounds can be used:

Note: Side effect of using ‘map eap’ is that ISE processes the MAC address as if it is a username within the system so the identity format of ‘mab eap’ and regular mab will look different in places like live log

In addition to above, you may need to create a separate NAD profile to use EAP-MD5 for MAB: 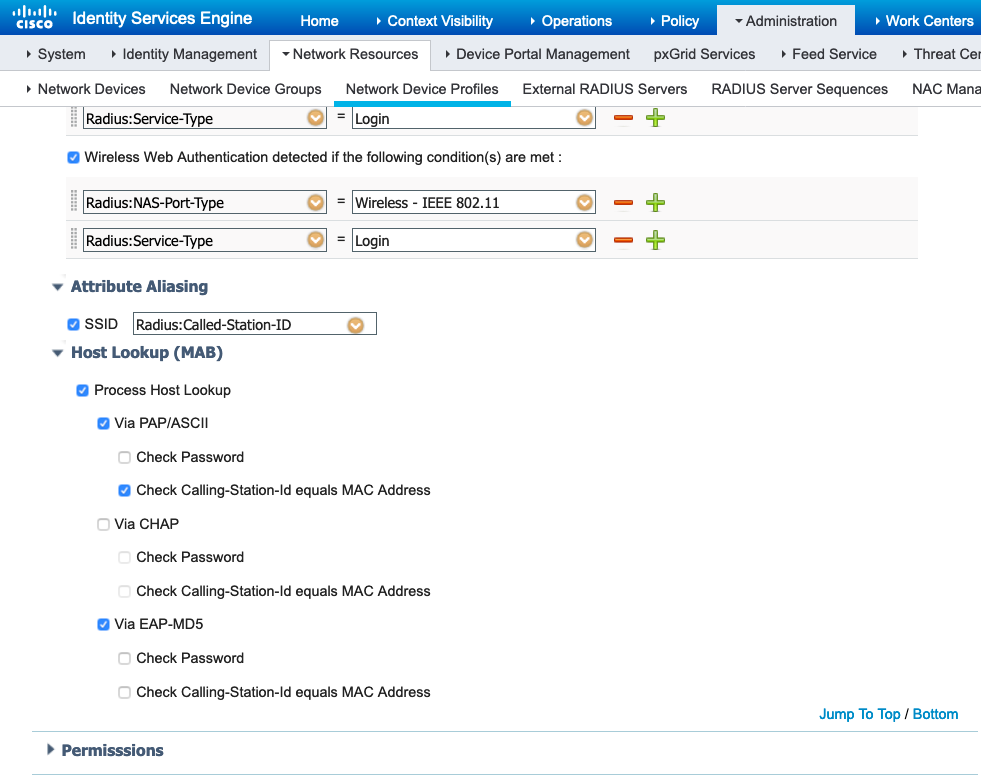 Note: Once NAD profile has been created, it needs to be applied to the NAD as well as Authorization profile to take affect.

In general when different policy is to be used for specific device, it is best to utilize Network Device Groups within ISE and allocate network devices in different groups and use it for policy condition. However, there may be cases where admin would like to send custom string from the network device to influence policy decision. In the following example “Stack-“ will be prepended to the host name for NAS-ID attribute.

As ISE admin you made sure to include all AD servers in the ACL for Windows machines. Yet, when 802.1X with ACL is used, the users complain that their login takes few minutes or in some cases that their shutdown takes forever. However, when user unplugs the PC from the network, the PC is able to shutdown immediately. You also notice that when ‘permit ip any any’ ACL is used there are no login delays. You recheck the ACL but you have accounted for all AD servers on the network with specific TCP/UDP ports (FYI, required ports listed here: https://www.cisco.com/c/en/us/td/docs/security/ise/2-3/ise_active_directory_integration/b_ISE_AD_integration_2x.html#reference_94BE6ABB85BC47C8AEC29EF8D286E6E4).
Potential fix, permit ip fragments to AD servers in the ACL. If using dACL add ‘permit ip any host x.x.x.x fragments’ for each AD servers.
Note: ISE dACL syntax check will fail but can be ignored.

Admins generally want to segment off guest traffic. For wireless, admins can use auto-anchoring to tunnel guest traffic to DMZ, however, it is not easy for wired guest traffic to leverage the similar design. So typical alternative is to assign a different VLAN for guest users, which could be mapped to a different vrf. In order to achieve this, they opt to assign guest VLAN upon successful guest web authentication. Since CWA utilizes MAB, the endpoint will not be able to change VLAN upon web login automatically, rather they will be forced to download java applet to renew IP address which isn’t user friendly nor always applicable. One alternative way to achieve segmentation of guest traffic is to assign VLAN pre & post guest authentication. Consider when creating CWA policy on ISE, one would create two authorization profile; one for Web redirect (Default authorization on ISE for this is called Cisco_WebAuth) and another to provide access once authenticated. The trick is to send same VLAN ID as part of authorization for both authorization profile. The VLAN ID sent in both authorization profile is the one the guest users should eventually be assigned to. This way, guest users are not forced to change VLAN upon authentication and guest traffic is segmented from employee traffic.
Note: This will only work when closed mode is used (as opposed to monitor mode or low-impact mode)

It is rare to see VLAN ID/Name to be standardized across all access layer switches. It is common for it to be standardized in a single campus, but not across the entire network footprint. This poses issues when trying to create policy using dynamic VLAN assignment as the VLAN ID/Name that ISE is pushing via RADIUS may not exist on all the network device. Standardizing VLAN ID/Name is probably not any network team would want to consider. Also, creating ISE policies to accommodate all variances of VLAN ID/Names would be hard to manage. Now, one option is to use the dynamic attribute feature above where VLAN ID/Name is hard coded per endpoint. Dynamic attribute works as long as the endpoint isn’t nomadic. If endpoint tends to move from one access switch to the other, there is possibility that specific VLAN ID/Name for that endpoint may not be present on the network device.

There is another option where an alias can be created for each VLANs on the network device. The feature on IOS is called ‘VLAN group’. The original intent of the VLAN group feature was for multiple VLANs to be assigned in round robin for load distribution, but one can create single VLAN to single VLAN group mapping to create alias for each of the VLANs. This will allow switches to accept standardized VLAN names from ISE while leaving original VLAN names intact. Here I have two switches where on one switch the VLAN ID for user is 110 and name is USER110 while the other one has 320 and name of USER320 for VLAN information. On ISE policy, only single rule is needed with VLAN name ‘USER’ in the permissions for both switches.

Use CN instead of DN for LDAP group name

When using default LDAP schema for AD within ISE, it will use DN (Distinguished Name) for the group names, which is not easy to read within ISE GUI. This is especially true when trying to use LDAP group in other parts of the ISE such as policies. AD stores group mappings both ways (As in user objects are stored in group as well as group attributes are in user objects) so referencing users from group works as well. If you want to use CN (Common Name) for the group name, create custom LDAP identity store with following settings:

When ISE integrates with AD, each ISE node becomes a member server of AD domain. Due to this ISE doesn't require service account credentials to be saved to ISE, as it uses trust between the machine and AD for domain user/machine authentication. However, since ISE is not a Windows server, it doesn't follow all of the domain level GPO settings that AD admin may require for Windows servers. One of the setting that doesn’t follow domain settings is password renewal interval for the machine account. Although ISE doesn't honor the GPO setting, it can be configured manually using AD Advanced Tuning option. Here is instruction on how to configure the machine account password renewal period, for other settings that can be configured via AD Advanced Tuning, please refer to: https://www.cisco.com/c/en/us/td/docs/security/ise/2-4/admin_guide/b_ise_admin_guide_24/b_ise_admin_guide_24_new_chapter_01110.html#reference_D81D04FDE46C4FF1A396641074E8836C

Note: ISE Machine change password should trigger every (configured-time) / 2 seconds. However, the ISE machine Kerberos TGT refreshes every 30 minutes regardless of machine password settings so as to keep the TGT fresh

For VPN it is helpful to break out your use cases, i.e. employee vs. vendor VPN.  In most cases customers will have different tunnel group setup for different VPN use cases.  We use the Cisco-VPN3000 tunnel group name (option 146) for our VPN policy sets:

Paul, thanks for the tip. I added to the policy set table.

Latest Contents
ISE upgrade timed out
Created by a.maldonado on 06-25-2022 11:24 PM
1
0
1
0
Hi, I wonder if someone can help me. I will appreciate it very much. I started the process to upgrade our ISE deployment consisting of 2 SNS-3615-K9 servers. These have AD-OS version 3.0 (with no patches) and I wanted to upgrade it to AD-OS 3.1.&nbsp... view more
ASDM Install on windows or mac
Created by dustin inge on 06-25-2022 06:52 PM
3
0
3
0
I am attempting to setup a ASA 5515-x for the first time on my own.I have followed what I can on default cmd setup for the MGMT port.interface Management0/0 management-only nameif management security-level 100 ip address 192.168.1.1 25... view more
Any good idea to collect MAC address?
Created by Snika on 06-25-2022 11:54 AM
0
0
0
0
We are reviewing an ISE deployment. ISE is trying to authenticate a user with a MAC address. There is no DB server like Active Directory here. Collecting the MAC addresses of numerous users is cumbersome. Any good ideas?
How to request MAC address registration using ISE guest port...
Created by Snika on 06-25-2022 10:27 AM
4
0
4
0
We are trying to control devices through MAC authentication in ISE. Department MACaddr Endpoint Identity Group Policy Sales aa:aa:aa Sales Group 1.1.1.0 Permit Marketing bb:bb:bb Marketing Group 2.2.2.0 Permit ISE does not use user identity, onl... view more
Ciphers supported by the ASA
Created by ROHIT SHARMA on 06-25-2022 07:34 AM
4
0
4
0
I have an ASA where the Ciphers support is limited to 256 bit ciphers only. Why is it not showing 384 bit ciphers?Thanks in advance!-----------------ASA# show ssl ciphers all These are the ciphers for the given cipher level; not all ciphers are supported ... view more
Ask a Question
Create
+ Discussion
+ Blog
+ Document
+ Video
+ Project Story
Find more resources
Discussions
Blogs
Events
Videos
Project Gallery
New Community Member Guide
Related support document topics