The node which redirects the traffic onto the backup LSP is called the Point of Local Repair (PLR), and PLR can be the primary LSP head-end itself, or transit router along the path. 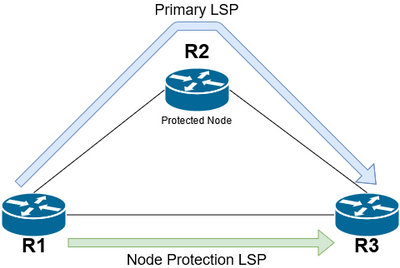 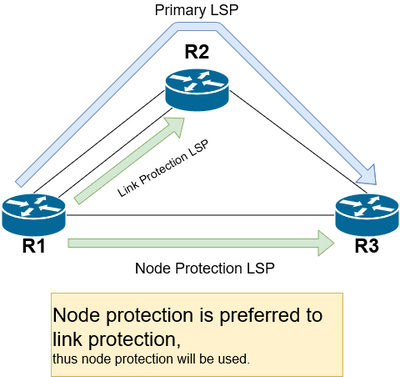 As it's currently implemented in IOS XR, these auto-tunnels will be signalled with zero RSVP bandwidth.

When a link/node down event is taking place, it is possible that many primary LSPs will all fall back to a same backup LSP. When this many primary LSPs are each carrying a significant amount of traffic, this will potentially cause a traffic bottleneck on the back up physical link, affecting many other unrelated traffic streams using that link.

Figure 4: FRR causes a traffic bottleneck on the back up physical link 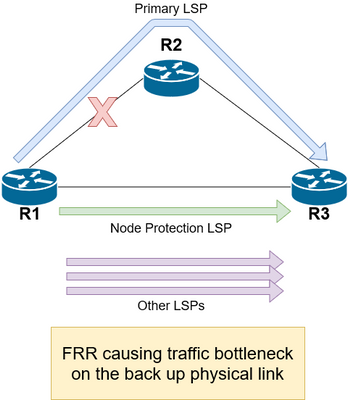 Finally, when an auto backup LSP becomes capable of signalling a specific bandwidth, then there will now be a need for a network operator to soft-preempt these backups in case the bandwidth they are reserving is needed by a higher priority LSP. Soft-preemption will allow the backups to keep on carrying traffic while the control plane is trying to find other path to create a new backup, instead of the control plane bringing down (hard-preempt) the backups right away.
Let's refer to this particular need as need #3 "a need to soft-preempt auto backups". 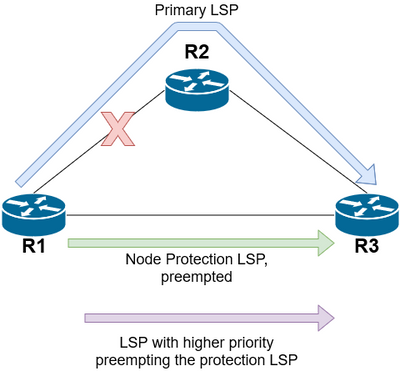 Disclaimer:
7.5.1 might not be a GA (general availablity) release.

Starting with IOS XR 7.5.1, with regards to auto backup LSPs, the following model is introduced:

Note that as a result of the new feature:

Three new CLI configuration is introduced as part of this feature:

Users can pick and choose which configuration they want to use.
I.e. there is no requirement to have all three new CLI configuration active at the same time.
For instance, users can limit the amount of protected bandwidth per backup tunnel without having the backup tunnel to signal any specific bandwidth value.
Or maybe a user configures protected bandwidth limit with bandwidth signaling, but without configuring soft-preemption.

"MPLS TE auto backup Bandwidth Protection" is an IOS-XR platform independent feature.
As such you can configure this feature on IOS-XR platforms such as ASR9000, NCS5500, and so on, as long as it runs IOS XR 7.5.1 or above.

Acronyms and definitions for terms used throughout this section:

"Tunnel" and "LSP" refers to same thing and are being used interchangeably. 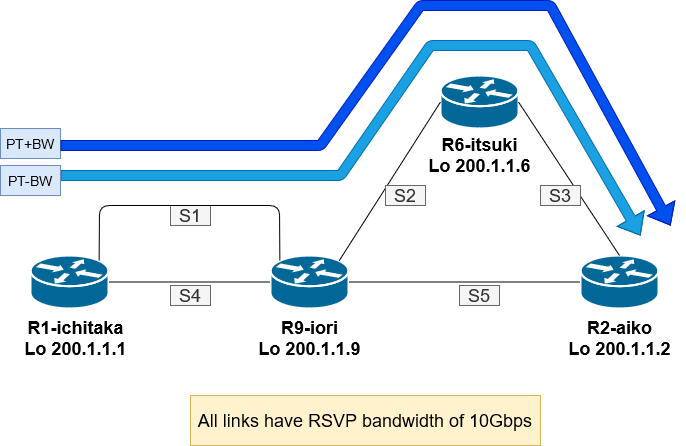 IGP is ISIS, RSVP and mpls traffic-eng are configured in all relevant interfaces.
We have two primary LSPs:
- tunnel-te1 which is a PT+BW.
- tunnel-te2 which is a PT-BW.

All primary LSPs are up:

Each primary LSP is consuming 1G of RSVP bandwidth along the path:

Note that both primary LSPs are using same segment HundredGigE0/1/0/0.1 (S1 in figure 7).
We will create link protection over this sub-interface later.

Now let's create the auto backup with no bandwidth protection, which is an existing feature.
Let's do link protection for segment S1.

Tunnel-te65005 head end is R1, and tail-end is R9. It's protecting segment S1 by taking backup path S4.
Moreover, it is signalled with 0 bandwidth, as per existing feature.

From the above output, it looks like the router keeps on trying to create NNHOP-BW too (15x NNHOP creation/removal), this will keep on failing due to topology constraint.

We can configure the router to create auto backup for link protection only:

Note that now this tunnel is signalled with 5G bandwidth, previously it was signalled with 0 bandwidth.
This is because the new config "signalled-bandwidth <>" is applied to every auto backup under segment HundredGigE0/1/0/0.1 (S1 in figure 6).

Several things to note from above output (see the output that is marked bold):
1. This tunnel is signalled with 5G bandwidth
2. This tunnel is a link protection LSP with bandwidth protection ("NHOP+BW").
3. It's using same path as existing NHOP-BW tunnel-te65005.

How about if there is no more room to protect LSPs requesting bandwidth protection? Then we will use the regular auto-tunnel backups to provide FRR protection.
Let's see this in action.

At this moment NHOP+BW tunnel-te65006 is protecting up to 5G of bandwidth.
PT+BW tunnel-te1 is consuming 1G out of that 5G already, leaving 4G remaining for other PT+BW.

Now what happens if there's a new PT+BW coming up requesting bandwidth protection of 5G?
Now let's check the outcome.

Now let's step back and see the case where auto-tunnel backups finds no path that can satisfy the configured signalled bandwidth.

We see that the router signals 0 value as bandwidth in order to keep the auto backup operational, afterwhich it will keep on trying to reoptimize to satisfy the bandwidth requirement:

Soft-preemption configuration in the auto-tunnel backup attribute set is now supported.
Since auto backups now reserve bandwidth, it is important to be able to soft-preempt these backups in case the bandwidth they are reserving is needed by a higher priority tunnel.

We configure soft-preemption through the following config.

After configuring the above, we see that soft-preemption is now enabled on both NHOP+BW and NHOP-BW.

Now let's try to preempt our existing auto backups by bringing up a new LSP.

The pre-empted auto backup later will re-signal with 0 bandwidth since it can't find any alternative link to use.

In the absence of soft-preemption, the auto backups will be torn down right away (i.e. hard preempted) as tunnel-te777 comes up.

So far we have described about how an auto-tunnel backup can provide link protection with bandwidth protection, now let's see how it can provide node protection as well.

Back to our diagram in Figure 6, we can create new PT+BW LSP with head end R2 and tail end R1, with path S3-S2-S1.
Then we will have R2 to create an auto-tunnel backup on S5 that provide node protection for R6.

Base configuration on R2:

Now let's create the auto tunnel backup.
We're aiming to node protect R6 so we need to configure auto-tunnel backup on the interface facing R6, which is S3 Fo0/0/0/40.1.

The auto-tunnel backup are now created:

Note from the output above that we're creating 4 auto-tunnel backup in one shot:

The unused tunnels will eventually age out and removed:

Config example given so far is when you configure the feature on head-end router.
The feature can also be configured on transit router.
For example, in Figure 6 with PT+BW having head end router of R1 and path of S1_S2_S3, R9 is a transit router where we can configure the feature as well.
On R9, we can protect the PT+BW by doing node protection for R6, by creating auto tunnel backup on alternate path S5.
When R6 goes down, R9 can switch the traffic from original path S2_S3 to S5.

Configuration is the same as when we configure on head-end router:

The following is a sample of configuration needed to activate Auto Backup Bandwidth Protection feature.
The line that is marked bold is new supported CLI config introduced with the feature.

NSR RP switchover is hitless for both MPLS TE control and data plane, provided all underlay protocol (BGP, ISIS, OSPF, etc) has been configured for NSR.

Gather the following set of logs from the router.
Replace "NAME_OF_ROUTER"with the name of your router.