Cisco Community
English
Register
Login
The War in Ukraine - Supporting customers, partners and communities. LEARN MORE
RegisterLogin
Options
Turn on suggestions
Auto-suggest helps you quickly narrow down your search results by suggesting possible matches as you type.
Showing results for
Search instead for
Did you mean:
1350
Views
0
Helpful
17
Replies

Good Morning, I'm hoping someone can help me with this issue I'm having.  I have been trying to boot my switch using the .bin file shown in the picture below.  But as you can see, it starts to load and then throws up the following error.  I have another .bin file that is older but boots fine when selected.  Am I missing a step?  I go into global config, type the following command: #boot system flash:cat4500-ipbasek9-mz.122-54.SG1.bin and hit Enter.  Then I reboot the switch using the reload command.  Thanks in advance- 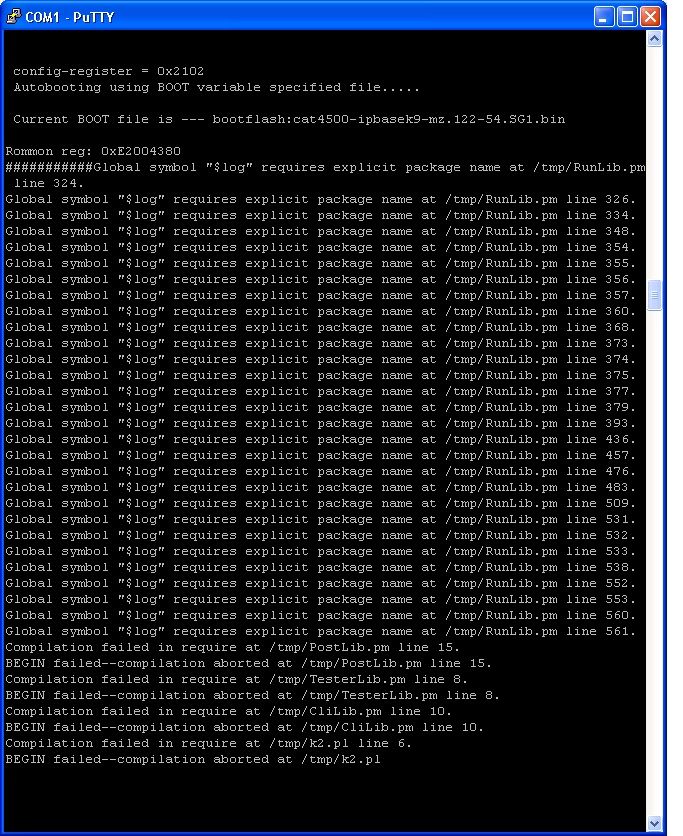 Release Notes can be found HERE.

Instruction(s) on how to upgrade the ROMmon can be found HERE.

if the other image is working sounds as if switch is ok , my next step would be verify the image you loaded up did not get corrupted by checking its MD5 and matching it against where it was downloaded on Cisco website  ,if it got corrupted it wont boot right. Or download fresh copy and try again

Out of interest what's the image name that's working fine

Mentor
In response to Mark Malone
that image is nearly 7 years old to might want to pick something newer , the alert looks to be some underlying Linux alert when I check it online
0 Helpful
Reply

Thanks for the reply Mark,

The MD5 check came back with a good match.  I just downloaded the image file fresh yesterday from Cisco to replace what we thought was a corrupt version already.  The image file that does boot is:

I know these are very old images but the hardware itself is old as well.

Beginner
In response to bigred1022

I just downloaded the latest compatible version from the Cisco site.  I have transferred it to the bootflash: of the switch.  Unfortunately I won't be able to test this out until 4pm EST today.  I appreciate your help though.  I will update this afternoon.

Mentor
In response to bigred1022
Ok that's good the MD5 matches but then you may have a bigger issue if the Linux section is throwing alerts and failing somehow to load any new images , it could be something more sinister , honestly I'm not sure on next steps for that , if it was me I would TAC it but that may be out of support as its old hardware

Yes reply back what exactly you see the whole boot process if you have it when doing the latest image, other users may be able to identify the problem if they have seen it before , more info better chance of fixing it
0 Helpful
Reply

Tried booting the latest image and although it added a line of text about completing decompression, the same error happened.  Screenshot below. 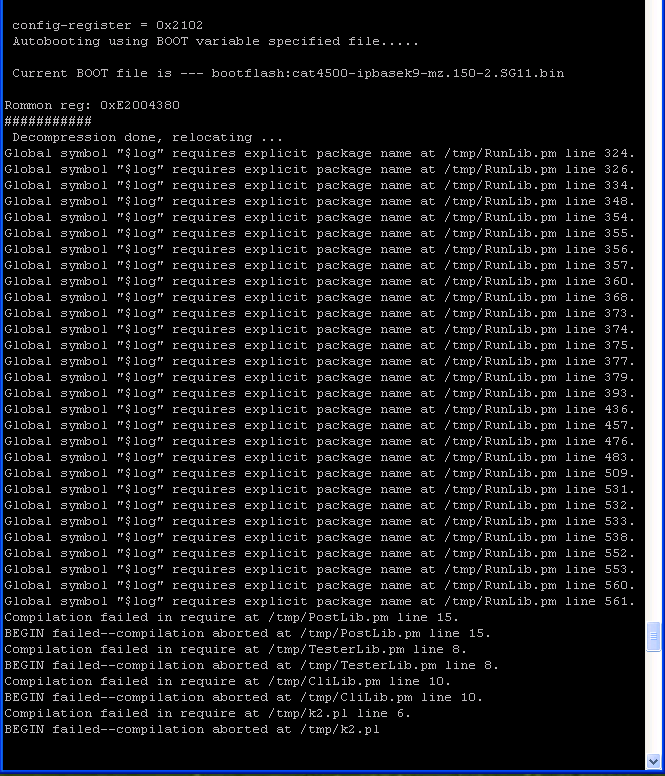 What is the Supervisor card?

What other line cards do you have in your chassis which require this specific train?

If the supervisor card is booting into ROMmon, post the complete value to the command "dir bootflash:"  I want to see what other file(s) are in the bootflash:.

The supervisor card is V.  When I reload the switch it tries the newest image that I uploaded today.  When it falls I cancel the autoboot which does take me to ROMmon where I just type boot to get the older image up and running as quickly as possible to prevent downtime.  I can't post an image of the for bootflash but the only 2 are the one in my latest attachment and the really old one I mentioned earlier in this post.  The boot variable only contains the new image file.  As for the line cards, we have 1 card that is not used at all cause the ports are just 100mb ports. 3 others (all 48 port) are gig ports.  And 1 final one that is for fiber connections.  I'm sorry I'm not at work nor near a computer to check further currently.  But I appreciate the help.

So what is the current IOS it's running and what IOS version are you trying to go to?   Post the complete output to the command "sh version".  I want to see what is the ROMmon version that's currently loaded.  I'm suspecting this is the culprit.

Read:  Upgrading the System Software and go to Table 8.

I will post that tomorrow.  I know it's the weekend so if you dont respond until Monday I'm not worried.  Again, I really appreciate the help.

Sorry for the delay, been sick all weekend and today.  But wanted to get this updated.  Here is the screenshot from the "sh ver"

Beginner
In response to bigred1022

I think I just noticed the possible issue.  I think I had the incorrect image file.  The current system uses ipbase and not ipbasek9.  Should I be trying this version instead: cat4500-ipbase-mz.150-2.SG11.bin That is the ipbase w/o crypto version.  The k9 version of that was ipbase ssh.  This is just a guess on my part though.

Release Notes can be found HERE.

Instruction(s) on how to upgrade the ROMmon can be found HERE.

Thank you for your help Leo,

Unfortunately I do not have a valid service contract and my current, soon to be former, vendor is basically refusing to help for some reason.  They are literally not answering calls or emails.  So I am unable to currently retrieve that ROMmon version.  One last question I had is shouldn't cat4500-ipbase-mz.122-54.SG1.bin work on the current ROMmon version (System requirements says it should)?  The current image is not ipbasek9 and the one I previously tried to boot to was ipbasek9.  I'm just wondering if I should try the non ipbasek9 version and see if it takes.

Should I have done this instead:

Of course this is not getting me up to the most recent image but it should get me off of this early image in the meantime.  Thanks-