Cisco Community
English
Register
Login
Great changes are coming to Cisco Community in July. LEARN MORE
RegisterLogin
Options
Turn on suggestions
Auto-suggest helps you quickly narrow down your search results by suggesting possible matches as you type.
Showing results for
Search instead for
Did you mean:
594
Views
25
Helpful
16
Replies 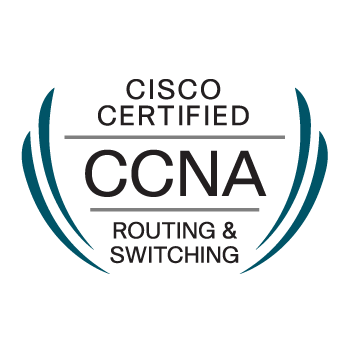 I am getting the following error on a WS-C3850-48P running 16.6.9 after entering service-policy ouput PM-QOS on the uplink. I'm not trusting any end point markings so the trust boundary begins at the uplink.

Below is my config:

I think that HW different than SW queue,
for HW refer to link below how you can config HW queue.
https://www.ciscolive.com/c/dam/r/ciscolive/emea/docs/2019/pdf/BRKCRS-2501.pdf

Thank you for this link, this is very helpful!

Hi @jnewton83985
You are matching traffic in ACL due to which the switch is generating this error. Try either of the following-

a. Match traffic on basis of DSCP value, or

Beginner
In response to ashishr

Rather then trust the markings from endpoints I am using the ACL's to identify and mark traffic. Is this not possible?

Advisor
In response to jnewton83985 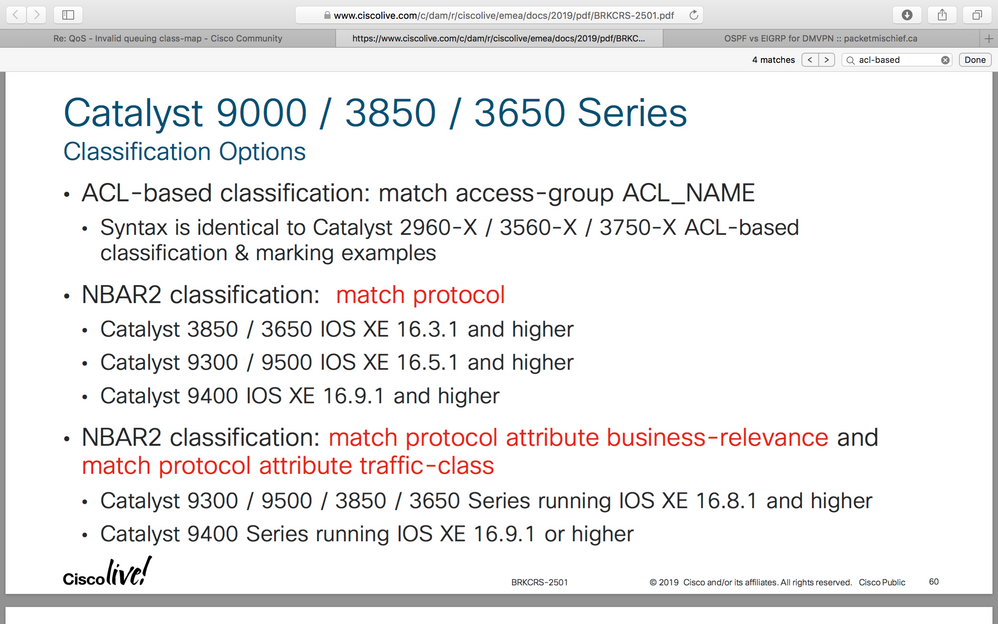 from ciscolive I mention before
3850 not suport ACL-based classification

I may not be reading your snippet correctly. The snippet shows ACL based classification the same as my config for 9000, 3850,3650?

Beginner
In response to jnewton83985

In 3850 by default the packets are trusted (the L2/L3 QoS marking is preserved). You can use ACL to identify traffic but here you are using a queuing action (bandwidth in policy-map) that is supported with dscp/cos/qos-group/precedence/exp based classification!!!

I do not have 3850 available as of now so I can't test this but if you remove bandwidth from policy-map (just for testing purposes) the policy-map should get applied without error.

Beginner
In response to ashishr

It's not, I believe, "bandwidth commands".  It's, I believe, whether your using a CBWFQ policy for ingress ("IN") or egress ("OUT").  Various commands are restricted to ingress (any?) or egress (some).  For example (in general, i.e. might be platform exceptions), bandwidth and shape commands might only be used within an egress policy, but police commands can be used in ingress or egress policies.

Since the error message mentions "queuing", that's an egress policy only issue.

How, for example, is the actual service-policy command configured on the interface?

I suspect, as also already noted by @ashishr, it's the combination of ACL matching and(/with) (egress) queuing that's the problem.  (Such appears to also be the meaning of the error message.)

If that's the situation, you should be able to ACL match within an ingress policy and than use "ToS/.../exp based classification" (as noted in error message) to match within your egress policy.  (I.e. you shouldn't be required to use a QoS group, as @ashishr shows, but that should be a way for it to work too.)

(NB: BTW, because of limited hardware QoS support, in switches, they often have quirks/restrictions in their MQC support.  Also BTW, the later IOS version QoS classification features, noted by @MHM Cisco World, are also likely only supported within an ingress policy.  [I do wonder, though, how extensive the NBAR2 support is, and if extensive, if it's all supported in dedicated hardware.  Years ago, the sup32-PISA has extra matching hardware support, but is was very limited.])

Lets say I do away with ACL classification since it isn't a supported queueing action ( I get the same error whether I use input or output on the uplink) and build the class maps using NBAR. I would apply the policy map on the uplink for ingress traffic, that means I have to apply the egress policy map to the switchport interfaces since only one policy can be applied per interface correct? The egress policy map is where the bandwidth commands can be places correct?

"The egress policy map is where the bandwidth commands can be places correct?"

Yes and no.  A policy map using class bandwidth command can only be used for egress, but some policy maps can be written such that they can be used for ingress or egress.

". . . since only one policy can be applied per interface correct? "

Cannot say for sure for a 3850, but generally an interface can have ingress and/or egress policies.

Same exact error?  Your original posted policy would be invalid for an ingress policy, as it uses priority and bandwidth commands.

I suspect, if you use an IOS version that supports NBAR, restrictions will be similar as with using an ACL.  (Understand, for some matching, NBAR is just a "pretty face" on an ACE, but NBAR can offer deeper packet inspection.  For example, an ACL matching port 80 might be used for identifying HTTP traffic, and NBAR matching protocol HTTP might only do that, or it might look deeper into the packet, ignoring the port and determine whether contents of packet appears to be HTTP commands.  [Where NBAR might have an issue, doing deep packet content inspection, i.e. beyond matching standard port numbers, is when packet contents is encrypted, e.g. HTTPS.])

With NBAR not able to inspect encrypted traffic that rules it out for me then. Back to ACL classification, I confirmed the error is the same when I apply the service-policy to the trunked interface for input and output. Below is a snippet, applying it to an etherchannel member was intentional.

"With NBAR not able to inspect encrypted traffic . . ."

That's sort of the point with encrypted traffic, i.e. you're not supposed to be able to "see" clear text, beyond at the source or destination.  (If you work for the NSA, their NBAR probably can.)

For an Etherchannel, you might need to either apply policy to port-channel interface, for all member interfaces (assuming there's not additional restrictions on using QoS policies for Etherchannels).

host 1 port - use ingress policy to classify and remark packet's ToS, as needed/desired