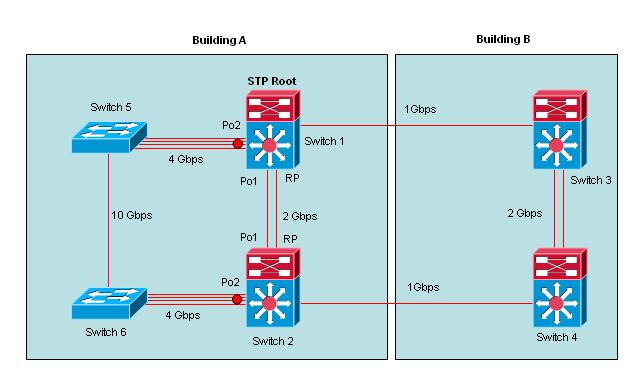 Switches 5 and 6 are third party switches.

Switch 1 is root of the first MSTP instance.

Switch 2 is root of the second MSTP instance.

So I’ve enabled root guard (the red points on the map).

Maybe the links speed seems strange, but it is required (There is a lot of bandwidth needs between switches 1, 2, 5, 6, on a specific VLAN).

Unfortunately, the root guard protected ports are moving to the root-inconsistent STP state.

Do you have an idea why?

Any recommendation to solve this issue?

Labels:
Everyone's tags (2)
I have this problem too
0 Helpful
Reply
3 REPLIES 3

This happens, because you have multiple ports connecting switch 1 and switch 2 together.

Have a look at this document for more info:

Why do you have multiple 1Gig ports connecting switches 5 and 6 to 1 and 2 but only a single 1Gig from 1 and 2 to 3 and 4. Seems like a choke point

Check out the spanning tree status on both the switches about the bridge and port roles and then enble root gaurd on this switches,If not a root briedge then make these switches as root bridge with tuning pirority of the bridges.

Thanks for your answers.

Yes Reza, the design is a little weird.

There are DWDM links between the 2 buildings, that is why the links between sw1 – sw3 and sw2 – sw4 are only 1G. The bandwidth is higher between switches 1, 2, 5 and 6 because of high bandwidth needs for servers connected to these switches, on a specific VLAN.

“Normally, root bridge ports are all designated ports, unless two or more ports of the root bridge are connected together.”

From my understanding, switch 1 Po2 should not be the root port.

Switch1 is receiving BPDU from switch2 (root of the second MSTP instance) from both Po1 and Po2.

From Po1, it should receive BPDU with a cost of 0.

So Po1 should be the RP.

But from my understanding sw2 BPDU can be received from sw1 po1 and Po2, because of the loop.

Does that mean we should not use Root Guard on a port if there is a loop (that is to say another path to the Root bridge)? The Cisco paper example is not showing an example with a loop (if there were 2 links to their switch D, for instance).

In your opinion, how can I prevent the third party switches from becoming root, in this situation?