CUCM region question when setting up meetme with IOS DSP

I am confused with the region configuration..

So I have two phones in two regions (711 and 729, all configured through the device pool). My CFB is in the 711 region. So in order for the 729 phone to join the meetme that is initiated by the 711 phone, I have to put the DSP in the 711 region. Why is that? Is it required that the DSP has to be in the same region as the initiator phone or the meetme CFB? I was thinking that it probably should be in the 729 region to help out the phone in the same region...

Labels:
Everyone's tags (2)
I have this problem too
0 Helpful
Reply
10 REPLIES 10
Highlighted

Can you confirm if the device

Can you confirm if the device pool that your conference bridge is in has an MRGL assigned which has access to your transcoder?

CUCM will try and allocate the transcoder on the side of the call which is using the higher bandwidth codec (in this case G711u).

The SRND has a great section on this behaviour outlined here

Thanks Jonathan for your

Thanks Jonathan for your response. Yes. The CFB resource (which is the built-in CUCM CFB) is in both MRG/MRGLs, one for the 711 phone and another for the 729 phone.

By the way, for testing the DSP, is it possible to completely disable a codec on a Cisco phone (7941) to force the DSP to kick in? Right now when two phones call each other, they just go with G729...

Thank you for the link too!

If you're using the built-in

If you're using the built-in SW CFB there are no DSP involved, DSPs are a physical piece of HW you install on ISRs.

The SW CFB only supports G.711 and wideband, which means that if the region between the phone and the SW CFB is not any of the previous codecs, there are two options:

A) It will fail

B) if there is an XCODER, which does have to be configured on DSPs, the CFB will be the one trying to allocate it, and for that, they need to speak the same language in first place, so, yes, they need to speak G711 between each other, then the XCODER will speak G729 to the other phone

If you don't have any XCODER, and want to make this work, you need to adjust the regions for G729 for point to point calls between phones, but everyone talk G711 to the SW CFB.

thank you Jamie as always.

thank you Jamie as always. Option B is what I am trying. I have the XCODER in the same region as the meetme SW CFB but when my G729 phone tries to initiate a meetme conference, I got the busy tone... It looks like that the CFB does not try to engage the XCODER...

Also is it possible to force a phone to only use G729 so I can test the DSP behaviors?

It is important for the MRGL to be configured so that the device that is limited to the higher bandwidth codec ( g711 ) is the one that requests transcoder. Example, if G729 is the region setting between two IP phones, but one IP phone supports only G711 , the phone that is not able to comply with the region setting requests the transcoder. The transcoder should be physically close to the device requesting transcoder. regions have to be setup in such a way that requesting phone is allowed to use G711 to the transcoder. This call leg is also subject to region configuration.

In your MRG assigned to the

In your MRG assigned to the phones do you have software CFB or hardware CFB?

It seems that you are invoking software CFB which supports G711 only. Hence your CUCM is invoking xcoder for G729 calls to join conference. Also, with software CFB G729 phones can't start conference when software CFB is assigned.

Configure hardware CFB and assign it to your MRG. The remove the software CFB from your MRG

It is SW CFB. But I do have

It is SW CFB. But I do have an IOS router as the transcoder. So is it still impossible for the G729 region phone to start the meetme meeting (with G729 codec)? I think this is what you meant but just to confirm.. Thanks!

It will start G729 if xcoder

It will start G729 if xcoder is available and assigned to the MRG of the phone.

Why don't you configure hardware CFB on the router. This will avoid xcoder since CFB will perform transcoding in addition to conferencing. This CFB will register with CUCM and can be used for MeetMe.

Finally, to force G729, this is controlled by regions. Just make sure that region setting is configured to 8kbps.

I am just studying it in a

I am just studying it in a lab. I know that it does not make sense. When I deploy it I will have an IOS resource as CFB for the remote location for sure. Right now I am just trying to understand how the resources are allocated.

Please see my config in the attached picture, hopefully that it makes sense to you.. 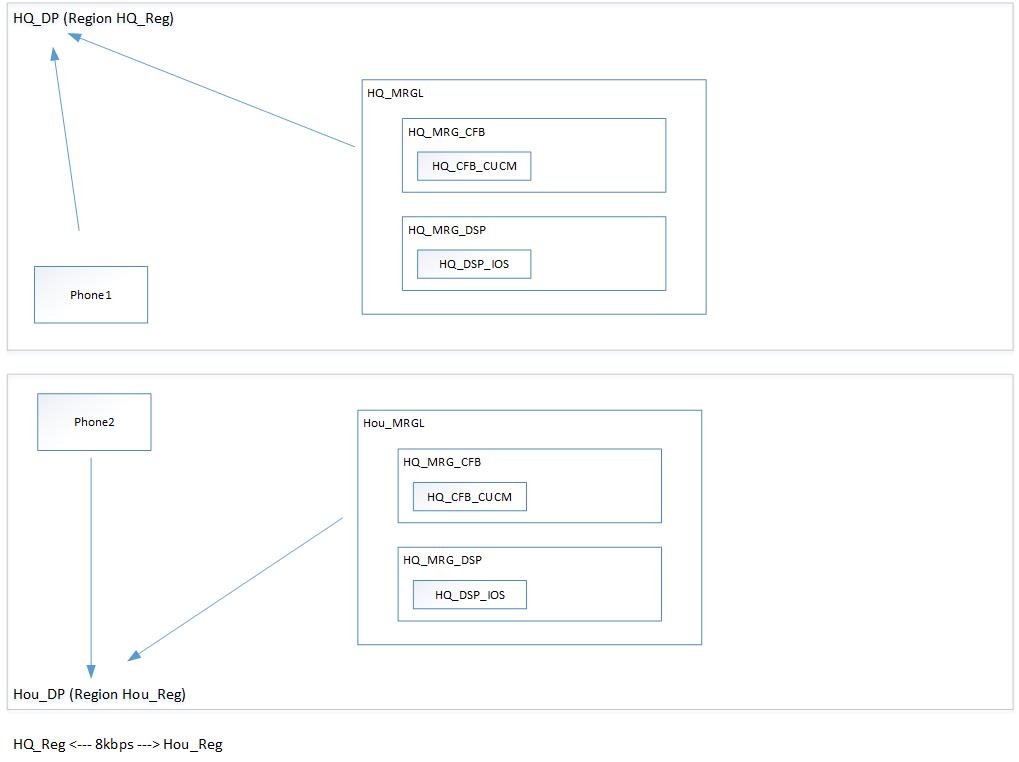 One more question, does the region matter for the DSP at all? DSP belongs to a DP that has region assigned. I guess that the DSP or transcoder inherits some other settings of the DP but the region setting might be irrelevant to it. Correct?