Hairpin public outside traffic to server on vpn tunnel

Need some assistance in how to configure ASA to allow hairpin of public Internet traffic across VPN tunnel.

How can I configure hairpin to allow public traffic on port 443 to reach this server? 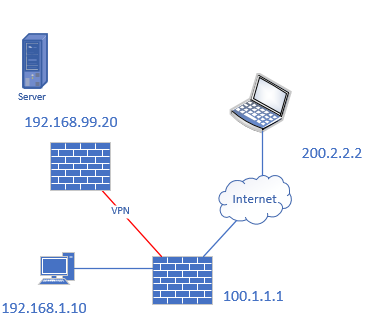 This is quite challenging, but there are multiple options to solve that. You have to choose between a more complex setup of your network or some extra work of preparation.

Four ways to solve that in my preferred order when I had a task like this to do:

Latest Contents
Network Security All-in-one ASA FTD WSA Umbrella ISE VPN Lay...
Created by Meddane on 05-17-2022 06:18 AM
2
0
2
0
Multiple Cisco Security Technologies in a single book : ASA Firepower, WSA, Umbrella, ISE and VPN with 100 percent 100 practical scenarios with 70 Labs to cover important topics of the Cisco SCOR Exam. The best part is ISE with interesting scenarios wi... view more
Understanding IP Layer Enforcement on Cisco Umbrella
Created by Meddane on 05-17-2022 03:10 AM
0
5
0
5
Cisco Umbrella is a big DNS service that provides not only the DNS resolution but also if the hosted website is trust or malicious, the idea behind the Layer DNS Security is that the modern attacks uses the DNS in the first step either to redirect the use... view more
Cisco ISE Integration With F5 BIG-IP LTM Load Balancer for G...
Created by Meddane on 05-15-2022 02:24 AM
0
0
0
0
I shared with you this detailed document I created with 27 pages about Cisco ISE Integration With F5 BIG-IP Locar Traffic Manager LTM Load Balancer for Guest Acces.   The method used for Guest Access is the Self-Registration. Healt Monitor using HTTP... view more
Cisco ASA 9.714 version SNMP not working in EVE-NG LAB Envir...
Created by waqas.muhammad49 on 05-10-2022 06:56 AM
0
0
0
0
I created an IPSEC Site to site Tunnel between two ASA Firewalls in EVE-NG topology and i want to plot the IPSEC Site to Site VPN graph on PRTG ? The SNMP Walk command is not getting any output . As the firewall is making SNMP inbound connections with the... view more
ISE Integration with Eduroam External Server
Created by deepuvarghese1 on 05-09-2022 08:31 PM
3
20
3
20
The purpose of this document is to demonstrate how ISE can integrate with an eduroam external server which is a WI-Fi roaming service that provides international access to devices in education, research, and higher education. Students, teachers, and resea... view more
Ask a Question
Create
+ Discussion
+ Blog
+ Document
+ Video
+ Project Story
Find more resources
Discussions
Blogs
Documents
Events
Videos
Project Gallery
New Community Member Guide
Related support document topics