What we are going to see in this section:

2.What is MPLS Label distributing protocol (LDP) ? How LDP works?

3.how to configure MPLS LDP Peering ?

6.How to configure MPLS L3 VPN with EIGRP ?

7.How to configure MPLS L3 VPN with OSPF ?

9.How to configure MPLS L3 with BGP AS OVERRIDE? 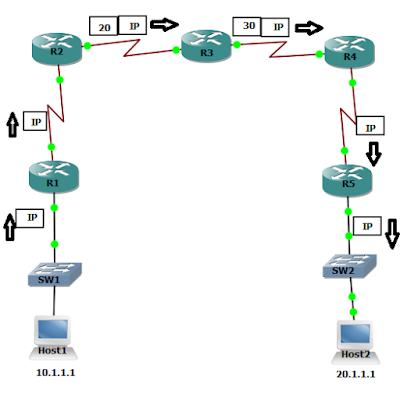 Routing protocol are used to distribute layer routing information. A forwarding decision is made based on:

Routing lookup are independently perform at every hop

MPLS is a forwarding mechanism in which packets are forwarded based on labels. MPLS packets can run other layer 2 technology such as ATM,Fame relay .PPP, Ethernet.  MPLS leverage both IP routing and CEF switching.

LSR (label switch router) any router that push label onto packet, pops label from packet, or simple forwards labeled packet. in other wards LSR forward packets based on labels and swap labels.

Forwards IP packets out of the MPLS domain

A sequence of labels to reach a destination is called an lSP.

Usually only one labels is assigned to a packet, but multiple labels in a label stack are supported.

These scenarios may produce more than one label:

The top points to the egress routers, and the second label identifies the vpn.

The top label points to the endpoint of the traffic engineering tunnel and the second label point to the point destination.

Latest Contents
Problems in getting an ACL that allows ssh only one way to w...
Created by ThomasD86 on 05-18-2021 02:55 PM
0
0
0
0
Hi,I am hitting another issue with an ACL that doesn't make much sense. I've got Router A: An ASR 920 that has 2 BDI configured on it. One has a public network configured and serves as default gateway for the UNI on the router. The other has a private IP ... view more
VLAN Management Software
Created by Jorenilson Santos on 05-18-2021 01:46 PM
0
0
0
0
Do someone know some vlan management software tool to set vlan via GUI without have to access the switch via CLI? I wiish give this task to some specific users from IT Team.
Internet down every day - catalyst 2960
Created by fmylo on 05-18-2021 01:37 PM
1
0
1
0
Hi everyone,I have problem with my setup which is ridiculously easy but still cannot fix it. So, the plan goes like this:Isp router - - > 2960 switch (L2) - - > 9 access pointsI have connected the ethernet line from isp router to fa0/1 and all the a... view more
VPN Issue with 1010
Created by rob1456657 on 05-18-2021 01:14 PM
0
0
0
0
Now I have a new issue... I have a configured Cisco Firepower 1010 with an S2S Tunnel to an ASA 5515x (IKEv2). Traffic is flowing fine to the ASA5515. However, we also have tunnels to the remote sites and they connect IKEv1 to the ASA5515. I hav... view more
Connect all switch ports to internet
Created by moakintola@gmail.com on 05-18-2021 12:45 PM
1
0
1
0
Hello: I bought a cisco switch and all 48 ports are moved to vlan 702. I have internet from another 3750 port with DHCP. Now, I have internet from all the port but I cannot ping each devices from the switch. I can ping the vlan 1 SVI interface IP fro... view more
Create ContentLogin to create content
Question or Discussion
Blog
Document
Project Story
Video
Related Content
Discussions
Blogs
Documents
Events
Videos
Project Gallery
Content for Community-Ad