IP routing is basically the process of moving packets from one network to another network using routers.

Routed protocols can be used to send user data (packets) through the established enterprise. Routed protocols are assigned to an interface and determine the method of packet delivery. E.g. IP and IPv6.

The three type of routing method.

Static routing is the process that ensure when you manually add routes in each router’s routing table. There are the advantages and disadvantages of Static Routing.

· There is no overhead on the router CPU.

· There is no bandwidth usage between routers.

· It adds security because of you, the administrator, can be very exclusive and choose to allow routing access to certain networks only.

And here are the disadvantages:

· The administrator is must have a vault-tight knowledge of the internetwork and how each router is connected in order to configure routes correctly. If you don’t have a good, accurate map of your internetwork, things will get very messy.

· If you add a network to the internetwork, you have to tediously add a route to it on all routers by hand.

· It’s just not feasible to use it in most large networks because maintaining it would be a full-time job in itself.

ip route- the command used to change the static route.

Destination network- the network you’re placing in the routing table

Mask- the subnet mask being used on the network

Next-hop address- this is ip address o the next-hop router that will receive packets and forward them to the remote network.

Exit interface- used in place o the next-hop address if you want, and show up as a directly connected route.

Administrative- distance by default, static routes have an administrative distance o 1 or 0. Next-hop AD is 1, and exit interface AD is 0.

Permanent- if the interface is shut down or the router can’t communicate to the next-hop router, the route will automatically discarded from the routing table by default. Choosing the permanent option keeps the entry in the routing table no matter what happens. 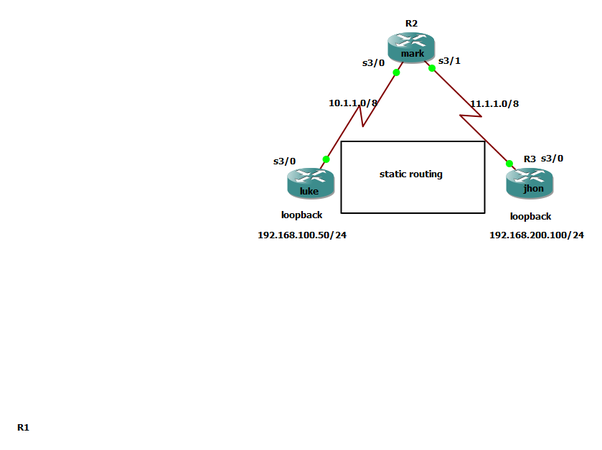 Latest Contents
Getting redundancy, but between 2 separate switches
Created by WallaceVanDunk1494 on 02-25-2021 05:05 PM
2
0
2
0
So I'm trying to think of a way to do this and have been messing around in gns3 a bit but I figured I'd post here for ideas while I putz around.   2 internet routers that connect to 2 different ISP's.  They share the BGP tables.  ... view more
SLA - BGP and static route
Created by imleo on 02-25-2021 03:36 PM
3
0
3
0
Hello Community, I'm working on the setup of a Cisco CSR. I have a route 10.0.0.0/24 learned by a BGP session on tunnel 200 and 201 (MPLS and failover), I also have a static route 10.0.0.0/29 (smaller than the previous one)  to a tunnel 202.&nbs... view more
Activate DHCP Service on cisco Switch only when main DHCP Se...
Created by rabiejenniat on 02-25-2021 02:46 PM
5
0
5
0
Hello Dear Community, i have crated a small test topology where i have a main DHCP Server connected to a Switch(WS-C2960-24TT), on the same Switch there are 4 devices connected and are set to ask DHCP for IP address.what i am trying to reach:1- i wou... view more
Is it bad practice to give a switch port a static IP address...
Created by JBrav0 on 02-25-2021 02:21 PM
4
0
4
0
Normally I would give the a device that always needs to be on a static IP address through its web interface or command line. However I ran into a different device. Its a security panel that's always on and there is no way to log into it, no web inter... view more
Problem interVLAN routing Cisco 1941 router and Cisco SG220 ...
Created by danielsffs on 02-25-2021 01:22 PM
4
0
4
0
Hello Everyone,I'm setting up a lab with intervlan routing. With 2 hosts, Cisco SG220 switch and a Cisco 1941 router. I added the topology. On the switch Gi1 is an access port in VLAN 10 and Gi2 is an access port in VLAN20. WS1 is connected to G... view more
CreatePlease login to create content
Discussion
Blog
Document
Project Story
Video
Related Content
Discussions
Blogs
Documents
Events
Videos
Project Gallery
Content for Community-Ad