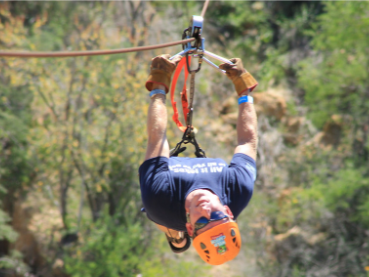 Active Directory Plugin - Enabling the use of multiple domain controllers

I am implementing callmanager 4.13 using the customer directory plugin for Active Directory. During the installation of the customer directory plugin you are required to put the host name or IP address of the AD domain controller. The documentation specifies entering a single host, however for redundancy purposes I wish to have multiple hosts for the directory server. What is the syntax for entering multiple host names or IP addresses? I actually completed the plugin install on the publisher using a space between two host names, however when I went to use the CCMPWChangePassword utility to reset the ccm administrator and other associated accounts for the subscribers the utility returned an error callmanager is not integrated with this directory. I uninstalled and reinstalled the plugin, used a single host name and the ccmpwchangepassword utility worked fine. This error could have been unrelated but the only change was removing the second host name on the directory integration.

I also have the same question for IPCC express LDAP/AD integration.

I just referenced the CallManager SRND and it suggests using several methods, the most practicle for me would be a DNS round robin methodology. would the same method be used for IPCC express?

Beginner
In response to baronwright

Did you ever get this answered?

WE ARE SUGGESTING CUSTOMERS TO POINT TO THE DOMAIN NAME FOR REDUNDANCY, which in short is kind of the same as having invalid entries in DNS for DC.

We all know that we fail to roll over the next DC or DNS entry (at least timely) and our services fail or timeout much more faster than we retry the next DC. This is wrong and only makes our deployment fragile since...

We can fix this and we have submitted a DDTS as follows:

All callmanager versions windows based until sept 2006

2. Locate the MaxCacheEntryTtlLimit value under the following registry key:

In the SRND on Active Directory Integration for CM 4.X - http://www.cisco.com/en/US/products/sw/voicesw/ps556/products_implementation_design_guide_chapter09186a00806e8c04.html

we suggest to use the domain name in the plugin utility for redundancy.

Because the directory is an enterprise-wide resource that is used by a potentially large number of applications and end users, it is essential to plan the integration carefully to minimize the impact on all other applications."

With redundant servers, the first name returned by DNS might be the name of a server that is not as local to Cisco Unified CallManager as others returned later in the response. Also, if your DNS server has the round-robin feature enabled, by design it rotates the order in which addresses are returned in the response. Depending on mechanisms such as client-side DNS cache timeout, along with other possible clients querying for the same domain in the interim, Cisco Unified CallManager could run two consecutive operations against two different domain controllers (DCs). In addition to the locality problem already mentioned, using DNS redundancy could keep objects created in the first operation from being found by a search on a different DC by a later query if the directory has not replicated in the meantime. Therefore, before choosing to use DNS to make the implementation redundant, be sure that these issues do not affect your deployment."

However our OS does not performs round robin/try other server by nature, as we do not modify the default behavior microsoft has in the OS:

In our case should be:

impression that DNS "round robin" is not taking place from the DNS server to the Windows client.

Pinging the same A-record domain name may result in the client using the same IP address.

This behavior is different from previous Microsoft operating systems.

We just kept the MS value which is to high to do either failover when a DC is down or round robin.

in the AD plugin docs

Latest Contents
Migrating to a Centralized IM&P Deployment
Created by pbsheehe1 on 10-16-2021 06:17 AM
2
15
2
15
Greetings, Wanted to share a few lessons learned while migrating from a distributed to centralized IMP deployment. Our current setup included many CUCM/IMP distributed clusters with centralized Expressway server for MRA login. We did not wish to perf... view more
Cisco UCCE PCCE Connector for CRM
Created by PTS on 10-14-2021 04:11 AM
0
0
0
0
Parsec's Cisco UCCE/PCCE CC Connector application for CRM works as a bridge between the CRM and Cisco UCCE/PCCE CC solution.The CRM can be any cloud based CRM like Salesforce (SFDC), ServiceNow ,MS Dynamics or a 3rd party CRM.The CRM user/Agent will have ... view more
Cisco Unified Communication Manager - Device Mobility
Created by Bejesh Kumar V on 10-11-2021 01:43 AM
0
5
0
5
It’s a feature which allows CUCM to determine whether the phone is in its home location or a roaming station.By enabling this feature users can roam from one site to another site and acquire the site-specific settings such as Codecs, MRGL, Call rout... view more
Which Pattern the CUCM will select?
Created by meddane on 10-09-2021 02:31 PM
3
0
3
0
Collab Toolbox
Created by Matt_W on 10-08-2021 03:39 PM
0
5
0
5
Cisco just Announced their new Collaboration Toolbox resources portal.  You can check it out here https://collabtoolbox.cisco.com/ It has a bunch of tools a partner can find helpful.   But if your interested in learning which... view more
Ask a Question
Create
+ Discussion
+ Blog
+ Document
+ Event
+ Video
+ Project Story
Find more resources
Discussions
Blogs
Documents
Events
Videos
Project Gallery
New Community Member Guide