Cisco Community
English
Register
Login
We're here for you! LEARN about free offerings and business continuity best practices during the COVID-19 pandemic
RegisterLogin
Options
Turn on suggestions
Auto-suggest helps you quickly narrow down your search results by suggesting possible matches as you type.
Showing results for
Search instead for
Did you mean:
261
Views
0
Helpful
1
Replies
Highlighted

Hi, thanks for your time and knowledge.

I have a topology like below in data center and plan to have a full redundant topology. Currently Primary/Scondary/ASA and another core switch at HQ are running EIGRP. Especially ASA is redistributing all IPsec tunnels (around 70 branches) and remote VPN (10.254.50.0/24) to EIGRP. Blue line is internal and red line is for DMZ, in terms of internal vlans, they are running through EIGRP which means that

however for DMZ vlan, it is terminated to ASA interface. for example, from server's perspective, default gateway is not primary/secondary switch, but ASA dmz interface. so servers in DMZ are recognizing Primary/Secondary as L2 switch. 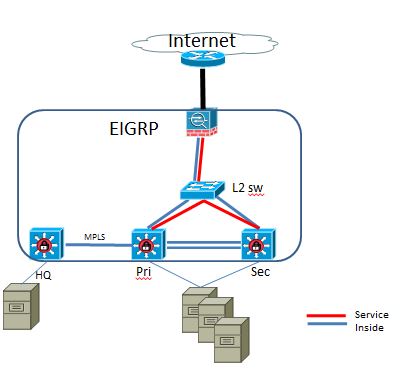 Q2) I like left topology because I don't need to setup redundant interface and less cables. Especially I don't need another IPS sensor (If I choose right topology, I need one more IPS sensor). Also, we don't have VSS between Primary and Secondary (jut trunk) Do you see any problem with left topology? I am ok for couple minutes of downtime due to device failure.

Q3) Both ASA inside/DMZ/outside ip address should be identical? except failover interface?  i.e inside of interface ip is 10.254.5.4 now. then this will be both inside IP for Active/Standby? or I need different ip address for all interfaces?

What are your devices?

What are your devices?  Router/switches/ASAs?  Your pictures are kind of cut off so it hard to understand your topology.

You need to have two Layer3 devices to run HSRP one will be Primary and one would be Standby.  You should be able to run EIGRP on all the devices.