Building your own underlay - spine/leaf

I'm working for a client that wants to implement VMware NSX has overlay but wants a new network for underlay too. I'm working on this underlay. They will add VXLAN with NSX after this.

He wants a spine/leaf architecture. The easiest way would be to use ACI but he doesn't want it (and it won't happen).

So, I need to build a spine/leaf architecture manually as underlay. All links between spine and leaf must be active.

In my past, I did this with a FabricPath setup with L3 at spine. Now this client wants Nexus 9000 (NXOS mode) so I think there is no FabricPath.

So right now, I need to build a custom fabric from scratch. If I had only two spines I could do vPC from leaf to them but as soon as they will add a new spine, the setup won't work.

You understand I am at the begining and trying to unravel all this.

Anyone had documentation ? I don't see a lot of doc about building your own fabric from scratch without using fabricpath.

any inputs would be great

EDIT : I added a wonderful mspaint drawing. I'm looking to configure what is in the red box. I didn't draw it but it's possible that some servers may have to connect to two leafs (vPC) for redundacy 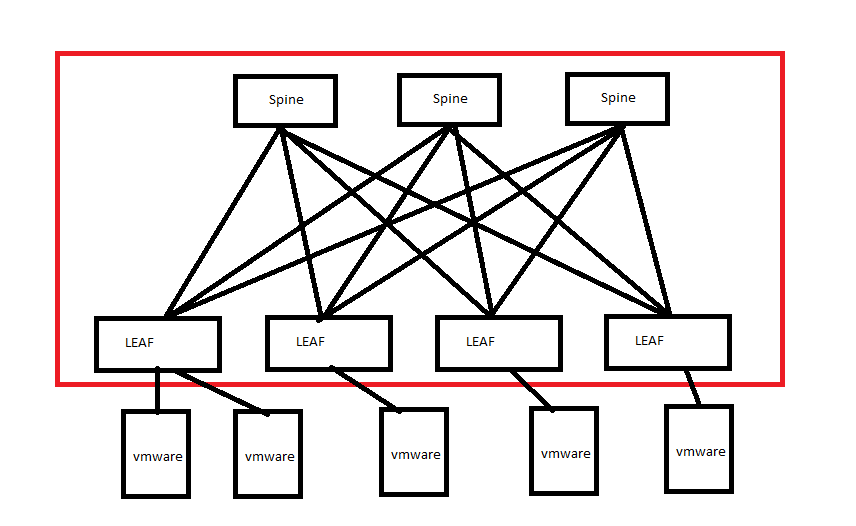 1 person had this problem
I have this problem too
Labels:
0 Helpful
Share
Reply
7 REPLIES 7

Beginner
In response to Yachay
Options

thanks for the links.

I'll have to take a deeper look at the first one but the last two are more about overlay than underlay.

They talk a lot about vxlan but since NSX is going to do the vxlan (overlay), I just want to be sure the underlay is OK.

At page 39, you have a section about underlay and with some information about ways to do it like OSPF, ISIS and BGP.

I found the video presentation of this powerpoint. Everything is very clear now.

with this you have a beautiful fabric with your own configuration. All leafs become the default gateway of your VTEP networks (vmware hosts) and it's all routed with ECMP with all links being active !

You have mentioned "All leafs will become default gateways for VTEP networks". Could you please explain the following items as i have a similar requirement for one of my projects.

1. How many uplink did you configure from one leaf to one spine?

2. What is the IP addressing which you used for VTEP? Which pair of leaf did you configure the SVI for the VTEPs?

3. If SVIs are configured in a leaf pair and Vmware hosts are connected to another leaf which does not have SVI, how would the full feature of the ECMP be utilized?

Beginner
In response to mgr
Options

first I want to tell you that this project was cancelled so it was never made and I don't know if everything would have work but this was the plan :

1. How many uplink did you configure from one leaf to one spine?

2. What is the IP addressing which you used for VTEP? Which pair of leaf did you configure the SVI for the VTEPs?

It was cancelled before doing an ip addressing scheme.

3. If SVIs are configured in a leaf pair and Vmware hosts are connected to another leaf which does not have SVI, how would the full feature of the ECMP be utilized?

You should have SVI on all leafs in this design. All links between leaf and spines are all L3 so you can't reach an SVI on another pair directly. It will be routed to the destination and not just switched.

ECMP is used between spine and leafs and not between leafs and vmware hosts.

Thanks a lot for your explanation.

Beginner
In response to mgr
Options

Hi, Does anyone know of a guide , paper, video or Installation Guide that describes Hyperflex installation with NSX?