Cisco Community
English
Register
Login
The War in Ukraine - Supporting customers, partners and communities. LEARN MORE
RegisterLogin
Options
Turn on suggestions
Auto-suggest helps you quickly narrow down your search results by suggesting possible matches as you type.
Showing results for
Search instead for
Did you mean:
482
Views
0
Helpful
1
Replies

I am working on setting up dynamic redundancy between two ISP's.  I do not have a /24 block assigned so BGP peering is not an option.  The site is remote and I dont have the ability to easily change the way things are connected.  Here is the architecture is illustrated below.

The idea is to take the received default from the ISP's, redistribute it into seperate OSPF ASN's on the border routers, receive it on the ASA's, redistrivute it into the internal ASN (50) and propogate it to the 6500.  The 6509 gets two equal cost OPSF derived default routes and load balances internet bound traffic between the ISP's.

Two seperate IPSec tunnels exist back to an Active/Passive HA pair of ASA's at HQ.  The object is to get a tunnel active and nailed up over one ISP and not the other.

1) The 6509 receives the defaults on the same vlan as the ASA's inside interfaces land there.  I see the default received from one being heard by the other ASA and listed in the OSPF database.  I assume I need to filter defaults being recived on the inside interface but cant find a way to do it that works.

2) I'm not clear on how to tell the HQ ASA which tunnel to establish.  Theres no GRE over IPSec and I dont want to go there.  How do I steer tunnels originating from the Active/Passive HA ASA pair at HQ?

3) Steering tunnel traffic from the remote site is in question as well.  If I equal cost load balance, then I'll need to steer the traffic one way or the other as I dont think I can have both tunnels up at the same time.  Having trouble with this and need help.  A route map on the 6509 might work (changing the next hop address of HQ subnets).  Internet traffic would still get balanced but HQ tunnel traffic should steer nicely.  Ideas?

4) The final big issue is that I'm not well versed in OSPF and am concerned that there are underlying OSPF issues I'm missing.  Thoughts?  Red flags? 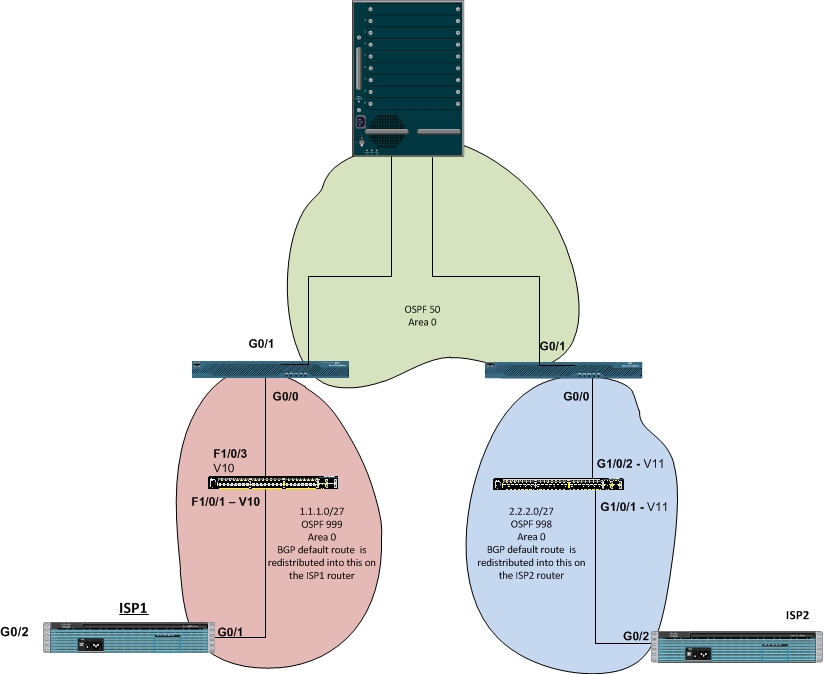 Latest Contents
OSPF for CCIE Enterprise and Infrastructure Exam
Created by Meddane on 05-13-2022 02:24 AM
0
0
0
0
The ultimate is coming.
Cisco Champion Radio: S9|E18 CC Unfiltered: Becoming an Expe...
Created by Amilee San Juan on 05-11-2022 12:57 PM
0
0
0
0
Listen: https://smarturl.it/CCRS9E18Follow us: https://twitter.com/CiscoChampion Reaching the height of your career is no simple feat. It often requires a combination of pursuing the right education, building the right professional network and being ... view more
SD-WAN and NAT Types
Created by Meddane on 05-08-2022 01:44 AM
0
0
0
0
In a typical production SD-WAN deployment, we would probably have many remote sites connected via many different Internet connections to a centralized data center or a regional hub. In most regions in the world, Internet providers will always use some typ... view more
Introducing the Cisco AI Networking Chatbot
Created by skadir on 05-06-2022 09:11 AM
0
5
0
5
The Cisco Networking Chatbot leveraging artificial intelligence to answer top networking questions is now LIVE! Read more about it and how it works in this Cisco Blog by Prasad Chebrolu.
Cisco Champion Radio: S9|E16 Protect Your Network from Count...
Created by Amilee San Juan on 05-04-2022 11:25 AM
0
0
0
0
Listen: https://smarturl.it/CCRS9E16 Follow us: https://twitter.com/CiscoChampion  For all end-users across Cisco’s ecosystem, counterfeiting presents serious risks to network quality, performance, safety, and reliability. It is dangerous becaus... view more
Ask a Question
Create
+ Discussion
+ Blog
+ Document
+ Video
+ Project Story
Find more resources
Discussions
Blogs
Documents
Events
Videos
Project Gallery
New Community Member Guide
Related support document topics