This technical blog implements Apache Submarine in Cisco UCS Integrated Infrastructure for Big Data and Analytics(https://www.cisco.com/c/en/us/td/docs/unified_computing/ucs/UCS_CVDs/Cisco_UCS_Integrated_Infrastructure_for_Big_Data_with_Hortonworks_28node.html) and Cisco Data Intelligence Platform (https://www.cisco.com/c/en/us/td/docs/unified_computing/ucs/UCS_CVDs/cisco_ucs_cdip_cloudera.html). At the time when this PoC was implemented in our lab environment, Apache Submarine was in tech-preview, means not intended for production grade setup. This blog aims to extend already existing Hadoop cluster as outlined in the previously mentioned CVDs link with Apache Submarine.

Hadoop Submarine is the latest machine learning framework subproject in the Apache Hadoop. It allows infra engineer/data scientist to run deep learning frameworks such as Tensorflow, Pytorch, and etc. on resource management platform such as YARN in this case.

These improvements make distributed deep learning/machine learning applications run on Apache Hadoop YARN as simple as running it locally, which can let machine-learning engineers focus on algorithms instead of worrying about underlying infrastructure. By upgrading to latest Hadoop, users can now run deep learning workloads with other ETL/streaming jobs running on the same cluster. This can achieve easy access to data on the same cluster and achieve better resource utilization. 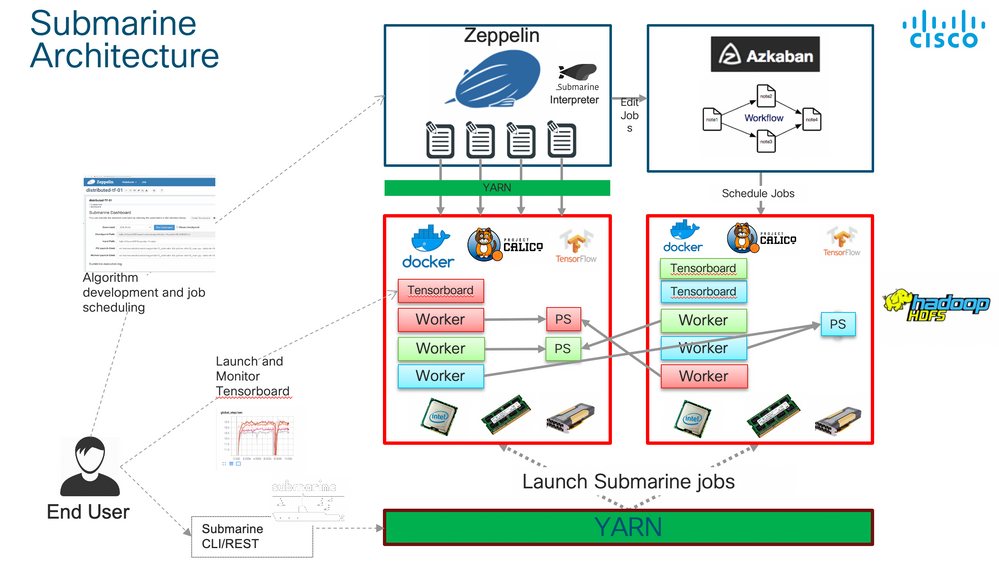 Following are the software versions used to validate the PoC

Submarine-installer can install all dependencies such as etcd, docker, nvidia-docker, and so on directly from the network. However, in cases where servers are not connected to internet, download server can be setup.

Setup download server for submarine installer by performing the following changes in /submarine-installer/install.conf

This document setup submarine in already installed HDP environment. Therefore, don't install anything else, as we assume yarn, docker, nvidia-driver, cuda, and nvidia-docker are already installed and properly configured. Verify it by running the following command:

Run the installer by running the following command.

In this reference design, we will install ETCD and Calico network only by using the submarine-installer. This document deploys and setup submarine in already configured and deployed HDP environment where it is assumed that docker, nvidia-driver, nvidia-docker, and yarn services are already setup. Any submarine specific configuration of already installed components will be covered in subsequent section.

etcd is a distributed reliable key-value store for the most critical data of a distributed system, Registration and discovery of services used in containers. Alternatives like zookeeper, Consul can also be used, however, it is NOT tested in this reference design.

Run ./submarine-installer/install.sh in rhel1, rhel2, and rhel3 to install and setup ETCD as shown in Figure. Type 2 to install component and then Type 1 to intall etcd and hit enter.

Note: Etcd must be installed in three servers to form a cluster. Here, we installed etcd in rhel1, rhel2, and rhel3.

After the install is completed, start the etcd service in all the three servers by running the following command.

Modifiy /etc/docker/daemon.json file. If it does not exist, create this file with the following contents in all the nodes.

Replace the variables in daemon.json file according to your environment as shown for reference purpose.

As previously noted in pre-requisites, ensure that Docker is using the cgroupfs cgroupdriver option if enabled YARN cgroups support.

Find and fix the cgroupdriver:

Calico creates and manages a flat three-tier network, and each container is assigned a routable IP.

Verify calico network by running the following command. It will show all host status except the localhost.

Test the calico network. Calico network install also contains script that provision two docker container in two different nodes and run ping. It can fail, if the other node is not currently setup with Calico. You can follow the following manual step after setting up calico.

Create a container in node 1 on new network

create a container in node 2 on the same network

In this reference design, nvidia-docker v1 is used. It is assumed that nvidia-driver, cuda, and nvidia-docker is properly configured. Before we proceed further, perform the following steps to verify the environment is ready for running GPU enabled distributed AI/ML.

Tag the image and push it to private docker registry

To test Machine Learning with Submarine Cifar-10 Tensorflow estimator example have been utilized.

Perform the following steps before you begin running submarine standalone or distributed jobs.

CIFAR-10 is a common benchmark in machine learning for image recognition. Below example is based on CIFAR-10 dataset. 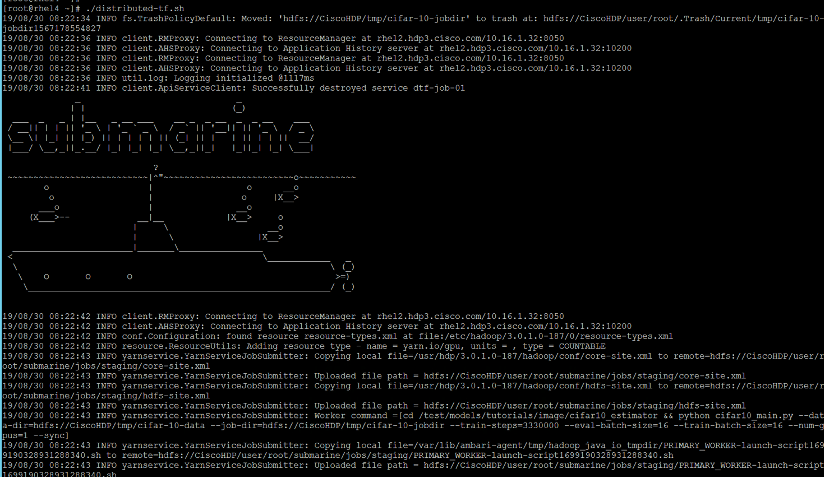 After submitting the job using YARN in the above step, perform the following steps to verify if the job is successfully running.

Launch YARN (NodeManager) GUI. Click Services. The job submitted will show up in Applications and Services tab as shown in below figure. 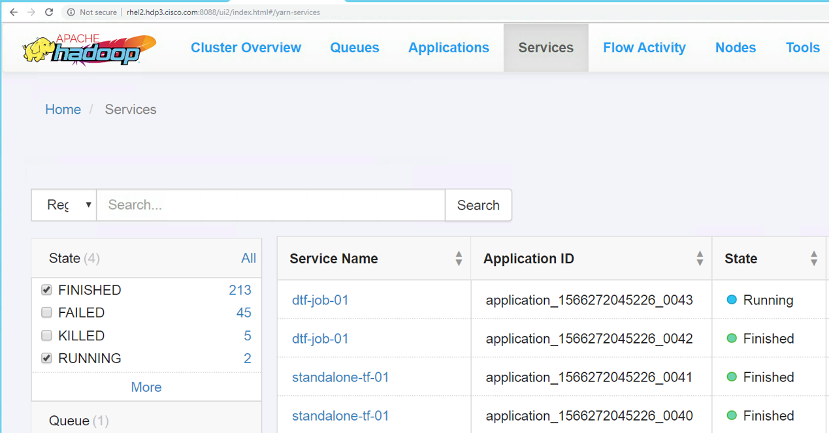 Click dtf-job-01 to see the details of this services. Below figure shows the components created as result of this job. As we requested 2 workers, 1 PS, and Tensorboard which can be verified.

Click Attempt List and then Attempt ID. Grid View will show the details of the containers launched, their status, and the nodes where they are provisioned. If GPU resource is requested, for example in this run, YARN schedule the workers docker container in the nodes where GPU exists. After the job is completed successfully, resources are returned to the cluster automatically.

Note: If requested resources for a job such as RAM, CPU, and GPU are greater than the available resources, job will fail. Verify cluster resources in YARN GUI to make sure advanced resource such as GPU is not already occupied by other jobs or users.

Click one of the worker nodes in the Logs column to verify if the job is running. For example, click rhel17 logs, and then click stderr.txt file. Verify the output as shown in below figure

We can also verify the resources utilized where worker is running. For example, as shown in below figure for rhel17 server. 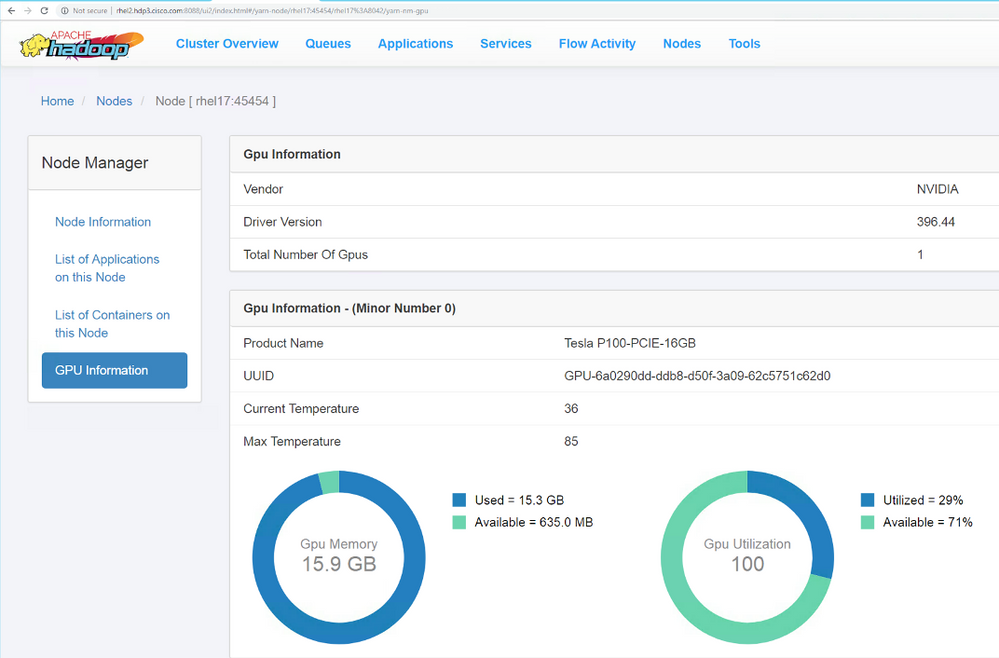 Cluster level resources can also be viewed by clicking “Cluster Overview” in YARN GUI. We launched submarine job with 2 workers each with 1 GPU. Cluster overview in below diagram shows the resource utilization at cluster level. 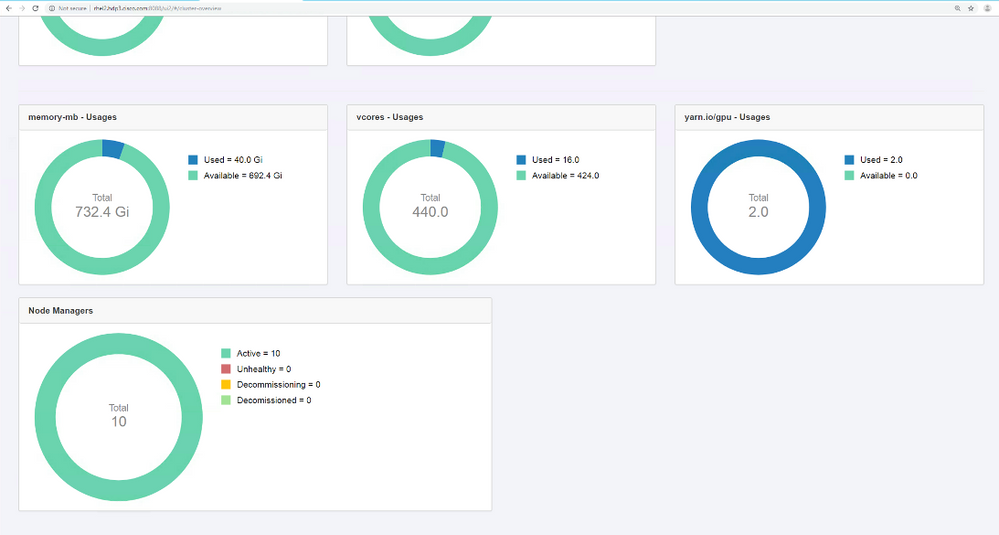 As we have requested YARN to launch Tensorboard for this job. Tensorboard can be launch by clicking Settings-->Tensorboard in Services/application tab. 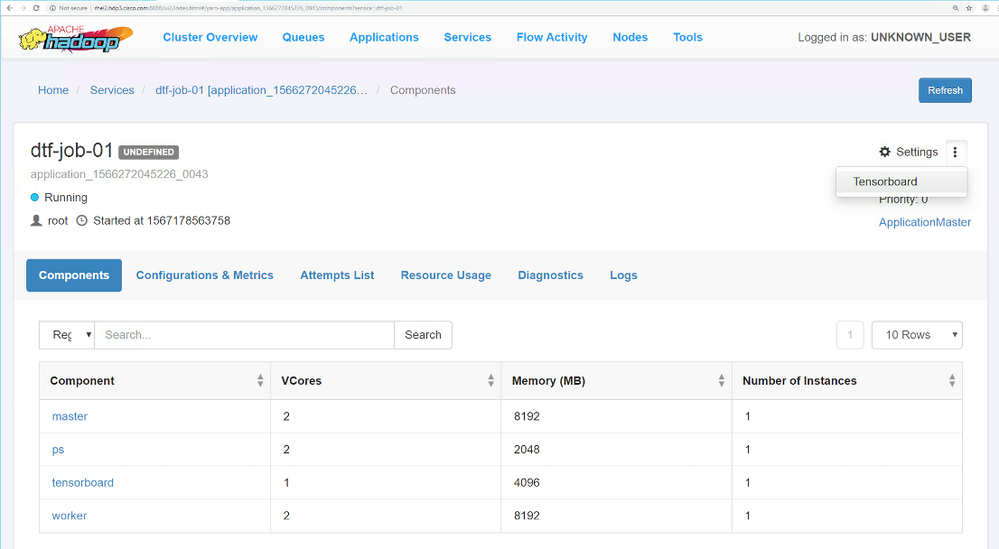 Tensorboard can be viewed as below 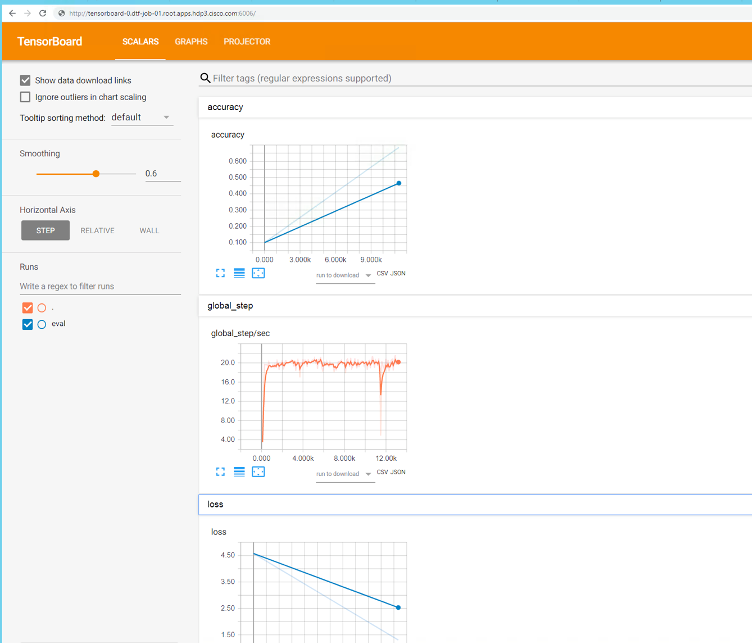 ssh to one of the node where worker is provisioned and run nvidia-smi command as shown below.

Zeppelin is a web-based notebook that supports interactive data analysis. You can use SQL, Scala, Python, etc. to make data-driven, interactive, collaborative documents.

There are more than 20 interpreters in Zeppelin (for example Spark, Hive, Cassandra, Elasticsearch, Kylin, HBase, etc.) to collect data, clean data, feature extraction, etc. in the data in Hadoop before completing the machine learning model training. The data preprocessing process.

Type submarine in the filter and click Edit to configure submarine interpreter according to your environment.

Following properties were setup in our lab setup.

Below figure depicts setting up the submarine interpreter properties 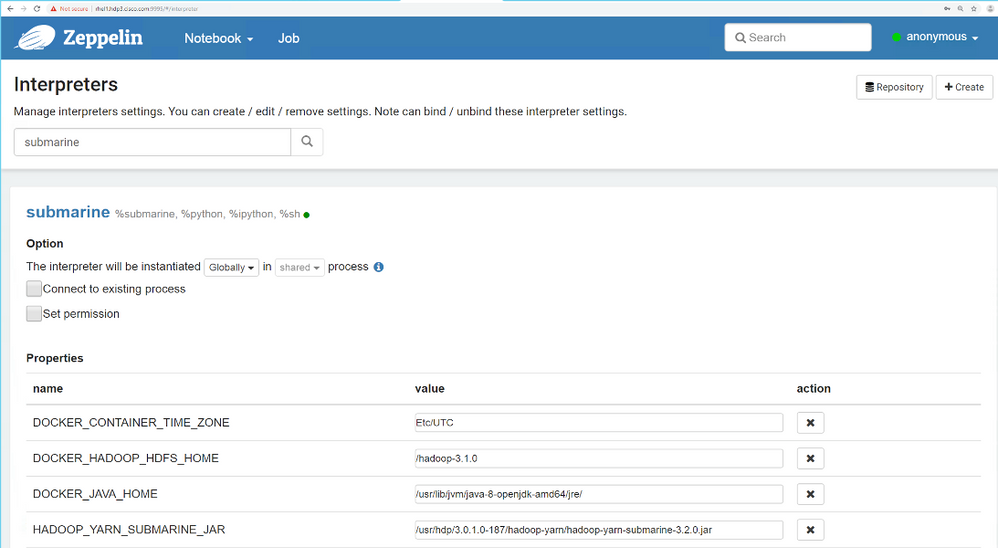 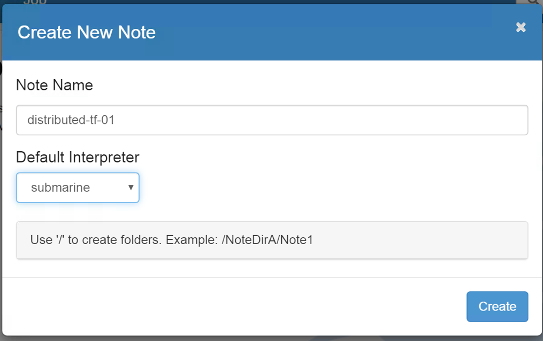 Click Run icon. Select JOB RUN from the Command drop down and enter the following. 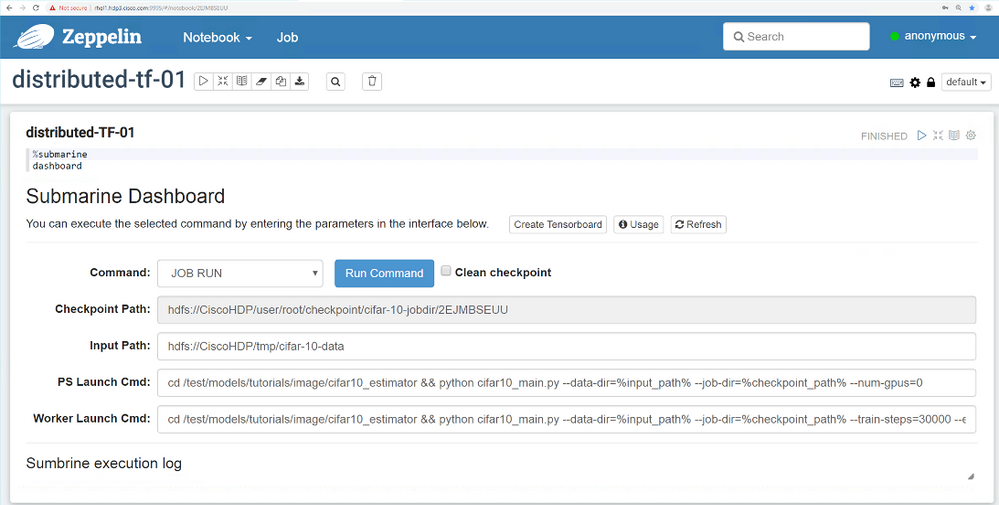 Click Run Command to submit the submarine job. The zeppelin submarine interpreter automatically merges the algorithm files into sections and submits them to the submarine computation engine for execution. Below diagram shows the Submarine execution log.

Launch YARN GUI. Click Services tab and you will find the job running as shown

Click Service Name for anonymous-2ejmbseuu for detailed view as shown in below figure. 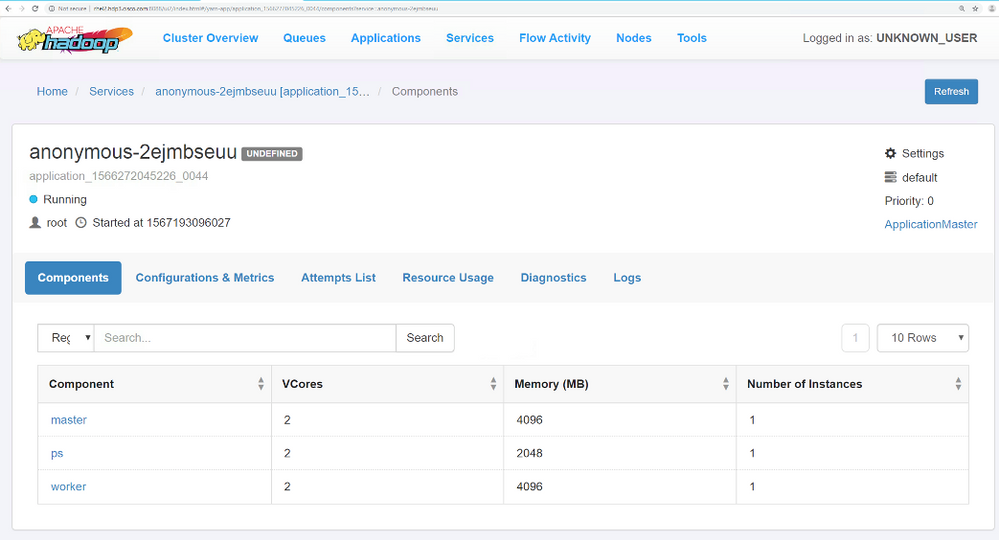 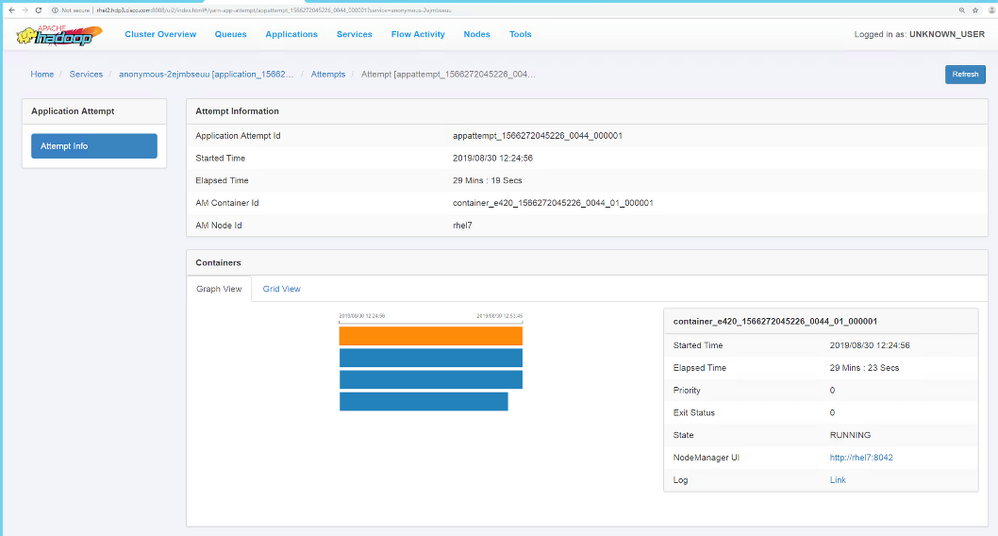 Rest of application attempts, logs, resource utilization, and so on can be explored in YARN GUI as previously discussed in this document. 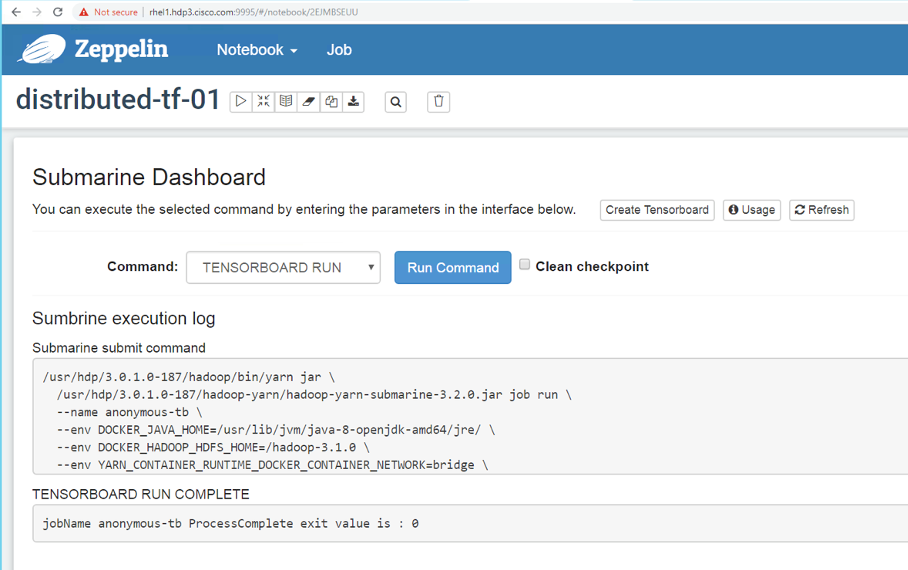 YARN GUI Services tab will show new service is launched as shown below.

Click on the service (e.g. anonymous-tb). Service detail page will show up. Click Settings-->Tensorboard as shown in the below figure to launch the Tensorboard 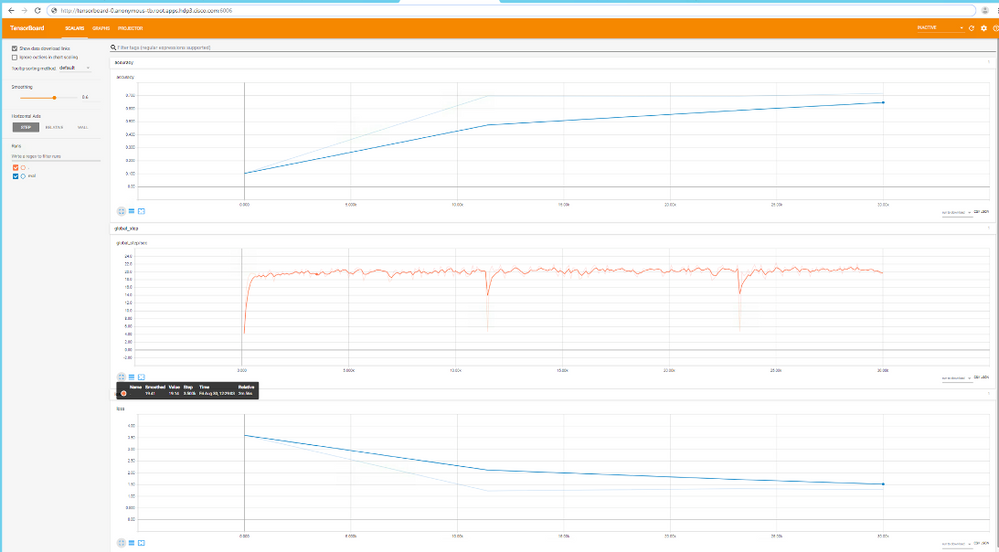 Latest Contents
Cisco USC-C210-M2 will only detect esxi flash drive install ...
Created by lukutu on 05-18-2022 04:43 AM
0
0
0
0
I'm about to go insane here. I've installed esxi 6.7u1 on my c210-m2, however the bios only detects the flash drive as bootable if I boot the installer ISO first and reboot. I've tried both legacy & uefi bios and no dice, doesn't appear in the BIOS as... view more
F8 CIMC Screen - Keyboard Not Working
Created by Machroxz on 05-17-2022 08:09 AM
5
0
5
0
Hi Guys, Have you guys experienced after pressing F8 and going to CIMC screen, the keyboard stops responding so I can't navigate to the option to change the default password to CIMC. Can someone please share your experience and if you did and fi... view more
UCS C240 M4S, cannot disable mLOM slot
Created by ThomasD86 on 05-16-2022 03:26 AM
0
0
0
0
Hi, I am working with this server that has installed in the mLOM slot this module: https://www.cisco.com/c/en/us/products/interfaces-modules/ucs-virtual-interface-card-1227/index.html   the appliance I am trying to install only wo... view more
C220 M5SX no longer boot after being powered down
Created by DRAGONKZ on 05-13-2022 04:08 PM
0
0
0
0
I've got a weird issue with both of my C220 M5SX servers. I powered down my complete home lab to physically move/roll the rack 10metres across the room to a better spot, and now they are failing to power on/post. They are UCS managed and hooked ... view more
vmnic order changed when upgrading from B200 M5 servers from...
Created by larryschroeder on 05-13-2022 08:38 AM
2
0
2
0
I am installing a new chassis and blades. I cloned the existing service profiles for the new blades. When installing ESXi 6.7, I noticed that the vmnic order has changed. The first four vmnics are labeled as MLOM but are listed last. If the MLOM ports wer... view more
Ask a Question
Create
+ Discussion
+ Blog
+ Document
+ Video
+ Project Story
Find more resources
Discussions
Documents
Events
Videos
Project Gallery
New Community Member Guide
Related support document topics