Cisco Community
English
Register
Login
Welcome Cisco Designated VIP 2021 Class in the 10th Year Anniversary of the Program -- CHECK THE LIST
RegisterLogin
Options
Turn on suggestions
Auto-suggest helps you quickly narrow down your search results by suggesting possible matches as you type.
Showing results for
Search instead for
Did you mean:
1009
Views
0
Helpful
4
Replies
Highlighted

I have a question that how data flows between two VMs.

In above scenario how my data will flow in shown / attached diagram. 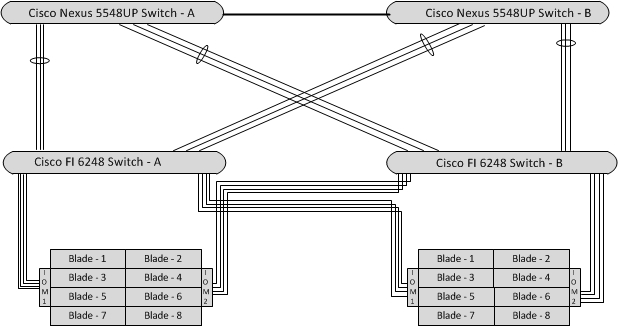 It depends which fabric your VM gets pinned to.

If your two VMs need to communicate, their path is dependent on their fabric pinning.  If both VMs reside in the same Layer 2 domain (VLAN) and are pinned to an adapter uplink which go to the same fabric interconnect (both to A or both to B), then the traffic goes up to that FI, and back down to the destination VM on the other chassis.

If the two VMs are in the same Layer 2 domain, but pinned to opposite fabrics, then the traffic will go northbound of UCS (to your N5Ks in this example) and back down to the other Fabir Interconnect, and down to the destination VM.

If the two VMs are in different Layer 2 domains (different subnets) then traffic will go northbound to a router/gateway, and come back down to the FI where the destination VM's MAC address was learned.

Keep in mind there is no data traffic directly between FI's.  If traffic from one FI needs to reach the other, it needs to go Northbound and back down.

Thanks Robert for your quick revert

I am sorry to say but I didn't understand the fabric pinning part which you have mentioned in your reply.

Do let me know if my understanding is correct in both

Collaborator
In response to Amit Vyas

You got your answer already from a great source.

I bet this videos (7a & 7b) will also help you understand better the concept of pinning and how we move traffic at the Fabric Interconnect level:

Some stuff might have changed f you watch other videos, they were posted a while already but the idea is the same and if you have more doubts, feel free to post your questions in the community.