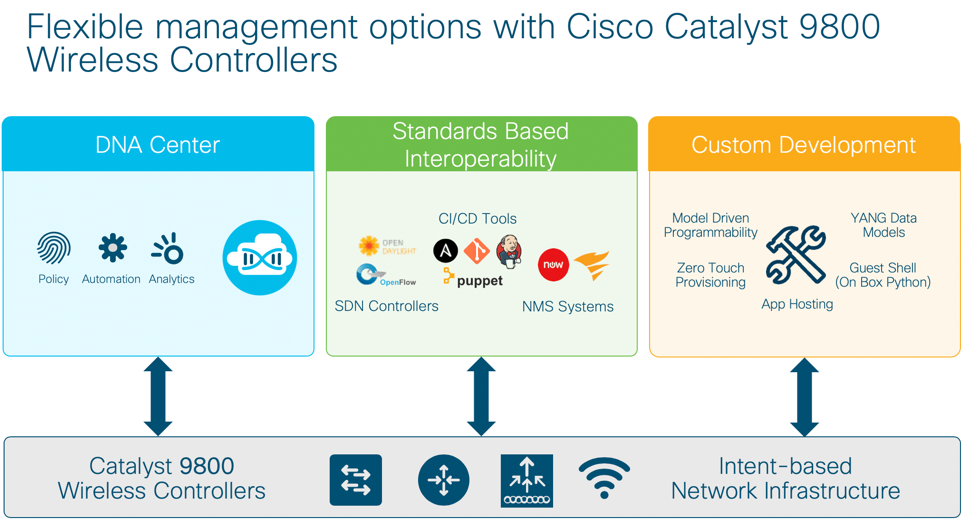 As a network administrator keeping up with the methods of today is more challenging, and not relying solely on traditional ways of configuration and management is demanding. APIs have become a buzz word, and supporting it shows that your device is next-gen. But in reality, APIs only work at the application layer; as network engineers we are more interested in looking at what’s cooking and what we need to cook at Network Layer. So NETCONF/YANG and Open Config, working at the Network Layer, become a necessity to achieve programmability and telemetry and provide a true next-gen wireless controller. In addition to these methods, getting consistent data flow information is very essential for better visibility and on-box Python which enables scripting on the device itself.

Miercom was engaged in independently assessing Cisco’s next-generation enterprise wireless architecture, with Catalyst 9800, alongside the latest competitive offerings of Hewlett Packard Enterprise (HPE-Aruba), Ruckus and Huawei Technologies focusing on aspects such as high availability offering a consistent performance, flexibility in terms of deployment (physical or virtual), ease of use & comprehensive security with unbeatable programmability and telemetry using popular standard models (YANG, NETCONF, RESTCONF) and on-box Python scripting for fulfilling the needs of next generation wireless campus

Cisco Catalyst 9800 wireless controller proved to be miles ahead in the race over the competitor offerings, in terms of High Availability, Security, Deployment Flexibility. The key thing was to assess the true next-generation wireless capability by supporting the modern methods of data extraction and configuration on devices. Touching the programmability aspect both at the application and the network layer is the basic necessity to sustain the claim of next-generation wireless architecture and Cisco Catalyst 9800 turned out, as expected, to be a clear winner in terms of providing a fully-loaded ammunition for open and programmable infrastructure.

Miercom verified that for security and traffic modelling, competitor offering samples traffic to be captured using sFlow which collects at best one or two of 100 packets while still being subject to false alarms, blurred analysis and missed packets. Full NetFlow offered by Cisco allows monitoring 100% of packet flow through hardware without impacting performance and enabling traffic monitoring & analysis at a very granular level.

Miercom report proves that Cisco does not compromise at all to offer a robust next-generation wireless network infrastructure with purpose-built high availability, unmatchable security, deployment flexibility and on top of it - the power of programmability with open standard based models.

Cisco Catalyst 9800 Series wireless controllers makes a complete package of being always on and secure while at the same time proving that there’s more to programmability than just the equation “Programmability=API”.

Latest Contents
Specific QoS configuration on EWC
Created by Torken on 02-25-2021 12:55 AM
0
0
0
0
Hello,I have 3 WLAN with QoS configured by metal policy : - Main network : Gold - SoftPhone network : Silver - Guest network : BronzeI want to configure QoS on VoIP traffic with platinum policy (SoftPhone network), but the rest of the traff... view more
Apply the AP 803's web setting will occur error 404
Created by Albert_Shih on 02-25-2021 12:08 AM
0
0
0
0
Hi all,When I "apply" the AP 803's web setting the web page will occur error 404.The version of AP 803 is 15.3(3)JKI have been try to use the Browser:Chrome、Edge、Firefox , and also try the older version of the browserStill doesn't work!!How do I fix ... view more
apple macos device disconnect wifi with 802.1x
Created by willwillwang on 02-24-2021 06:27 PM
1
0
1
0
wlc 5502 version is 8.5.161.6i have a ssid use by macos device,and disable loadbalance and 802.11rthe ssid use 802.1x authentication with windows 2012r2 nps service(radius)but apple device untimely disconnect,windows device is no problemi open a ssid... view more
Set up a firewall between wireless controller and APs
Created by showipinterface on 02-24-2021 04:15 PM
2
0
2
0
Hi, I would like to setup a Palo Alto firewall between cisco WLC and APs to control some traffic. Anyone can share some idea for this? or send link in order to know what I need to pay attention to? Thank you very much.
Way to get DFS notices in the WLC log
Created by derek.small on 02-24-2021 03:33 PM
1
0
1
0
If you are using UNII-2 Ext channels, is there a way to get DFS notices in the WLC log?  I thought they showed up there by default, but I just found DFS pauses in the logs on several APs, and there was nothing in the WLC log about it.  I've logg... view more
CreatePlease login to create content
Discussion
Blog
Document
Project Story
Video
Related Content
Discussions
Documents
Events
Videos
Project Gallery
Content for Community-Ad