802.11ax/Wi-Fi 6 is the latest step in a journey of nonstop wireless innovation. It builds on the strengths of the previous Wi-Fi standard while adding flexibility and scalability that lets new and existing networks power next-generation applications. Wi-Fi 6 couples the freedom and high speed of Gigabit Ethernet wireless with the reliability and predictability we find in licensed radio. Wi-Fi6, which was introduced by the Wi-Fi Alliance, achieves this breakthrough performance through a new and fundamentally different channel access mechanism known as Orthogonal Frequency Division Multiple Access (OFDMA).

The reason that OFDMA is so industry changing and disruptive is that it provides the ability for the access point (AP) to control & schedule both downlink (DL) and uplink (UL) transmissions to/from multiple stations (STA) in the same transmit opportunity (TXOP) allocating each STA to its own contention-free frequency block or resource unit (RU). This is analogous to licensed 4G long-term-evolution (LTE) and 5G technology with its notion of time-division-duplex (TDD) and granular per user equipment (UE) resource blocks (RB). The effect on unlicensed Wi-Fi networks is reduced channel contention/collisions, greater reliability and determinism. This can be illustrated graphically (Figure 1) by focusing on a key metric of determinism: 99%-ile voice latency. As we can see, unlike previous Wi-Fi generations (e.g. WiFi5), 802.11ax or Wi-Fi6 exhibits very linear and well bounded latency with increasing demand (# of voice STA). This allows network designers to plan for and deliver consistent quality in ever increasing dense networks. 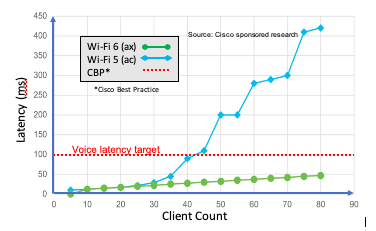 An important outcome of WiFi6 determinism with OFDMA is the ability to deliver scheduling-based segmentation over-the-air (OTA) to the client device or station (STA). Within this WiFi6 segment, applications such as Internet-of-Things (IoT), voice and other real-time collaboration services can be allocated resources appropriate to their needs resulting in significant end user benefits.

Building upon OFDMA, WiFi6 adds a feature called individual target-wake-up-time (TWT). TWT is a significant evolution of WiFi5’s Unscheduled Automatic Power Save Delivery (UAPSD) that allows each device to request its own precise wake-up time and recurring service period (SP). The AP respecting this request can aggregate large groups of such requests into much fewer triggered TXOPs resulting in more efficient, deterministic, contention-free channel access performance. It has been noted already by industry that this is analogous to the 4G/5G cellular paging/access channel structure having a similar dual effect of contention/loss reduction and STA power savings making it ideal for battery-powered Internet-of-Things (IOT) devices.

Also, like LTE/5G, WiFi6 incorporates spatial reuse (SR) techniques such as Overlapping Base Service Set (BSS) Packet Detection (PD) or OBSS_PD for short. This mechanism allows AP and STA alike to ignore transmissions from other co-channel BSS (identified by “color”) whose signal strength is lower than an AP governed threshold keeping the channel free for concurrent transmission or TXOPs. The key here is ‘governance’ as using too high of a threshold will result in signal quality degradation and too low of a threshold will result in little concurrency (i.e. no gain). Thus, we envision this capability being managed by advanced Radio Resource Management (RRM) algorithms allowing, in principle, the creation of virtual RF domains where-by clients in different cells/BSS can be isolated from each other from an interference point-of-view. This results in higher throughput, less contention/delay and when combined with OFDMA & TWT can yield LTE/5G-like performance from the Wi-Fi network!

With this newly enabled WiFi6 segmentation capability, we can envision Cisco’s Digital Network Architecture (DNA) and policy-based segmentation technology or Software-Defined Access (SD-Access) being extended all the way from the Wide Area Network (WAN), to the Local Area Network (LAN) and finally over the wireless LAN (WLAN) to the WiFi6 client device or STA. For Information Technology (IT) departments, both end-user security and quality-of-experience (QoE) can now be managed end-to-end  much in the same way managed LTE/5G Mobility services are provided today. However, this kind of capability requires tight integration with the Operating System (OS) and device manufacturers. Cisco then heeding this market need has begun enabling this integration through a comprehensive Device Ecosystem program that brings together the unique power of DNA/SDA and WiFi6 into a single cohesive networking construct. This concept is illustrated in Figure 2 below. 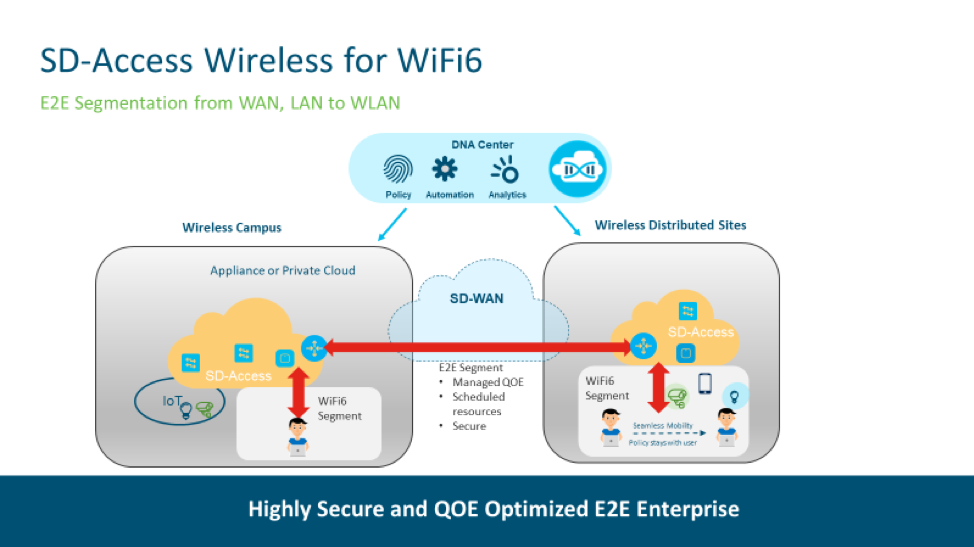 The applications for WiFi6 and the necessary Enterprise integration with DNA and SD-Access and the device ecosystem are broad but there are at least two critical use-cases we envision being addressed by this technology package: IOT and Collaboration.

In IOT, especially manufacturing and warehousing, control applications rely on determinism to operate effectively and (to a degree) safely. This is where Cisco’s WiFi6 segment will allow us to meet much of the stringent E2E requirements defined by the 3rdgeneration partnership project (3GPP) organization in their Ultra-Reliable and Low-Latency Communications (URLLC) specification including discrete & process automation applications that require tight latency (<10ms) and jitter (<100uS) bounds. With previous generations of proprietary wireless and Wi-Fi technologies, this was only achievable through specialized Operational Technology (OT) but with Wi-Fi 6 segments and Cisco’s DNA/SDA E2E segmentation this capability could be provided as an IT service over the existing Enterprise network significantly reducing delivery costs and operational complexity.

Similarly, in the world of high-definition (HD) collaboration such as that enabled by Cisco WebEx Teams, IT has long been challenged to provide these capabilities in a High-Density client (HD) environment or what we can term HD2 typified by a pure wireless office environment. Typically, meeting the stringent HD2 QOS requirements required significant over-provisioning of RF resources such as AP density & power and selective network KPI monitoring that might trigger manual diagnostics and problem resolution. With WiFi6 segments and Cisco’s DNA/SDA E2E segmentation, each collaboration flow can be routed to an appropriate segment where it’s unique QOE requirements can be met and then switched by the WLAN to a similarly appropriate WiFi6 segment with tight latency and high-throughput characteristics. This is provided intrinsically by DNA/SDA through policy, automation and assurance allowing greater density of these services to be deployed at lower operational cost.

For more information about Wi-Fi 6 technology or its business applications, please refer to this detailed white-paper - https://www.cisco.com/c/dam/en/us/products/collateral/wireless/white-paper-c11-740788.pdf

Latest Contents
DTLS Error
Created by shahinmadambi585 on 05-22-2022 08:20 PM
1
0
1
0
I am attempting to repurpose some 2602i's for use on a vWLC 8.5.171. However, when attempting to join, I receive a DTLS error. I believe this is due to an expired cert on the AP however the workarounds are not working. I have disabled NTP, changed the dat... view more
Wireless I/O graph-- What this pattern means? Why consistent...
Created by jonathan.maxwell on 05-22-2022 05:00 AM
2
0
2
0
Hello. Please see 2 images attaches-- I/O graph, and pcap. QUESTIONS: 1. What does this specific pattern in this wireless I/O Graph represent? 2. Why does wireless device exchange no packets for approximately 1.5 seconds in a repeating pattern? Any helpfu... view more
Enable Flex Connect mode in WLC
Created by Raj_82 on 05-20-2022 06:34 PM
8
0
8
0
We have two branch offices and the WAN is connected through IPsec tunnel. Presently those two office has Couple of AP's and it is connected to DC WLC in local- Centralize switching mode.  Now we are planning to enable Flex Connect mode to branch... view more
Mobility Express HA
Created by julio.vergara on 05-20-2022 04:32 PM
1
0
1
0
I am configured HA in mobility Express I have the mobility Express solution working correctly with an AP Master and the rest are slaves. I configure the HA, it takes the role of Mobility Express and everything works fine I turn off the Primary and ever... view more
SW C9200L-48P-4G
Created by picazo on 05-20-2022 03:54 PM
2
0
2
0
Hi every one! I have this kind of issue, I connected a cable in Cat 2960-CX (trunk)  and other side SW C9200L-48P-4G this SW we ready connect 9 access point C9115AXI over POE, one time connected, automatic restart this only C9115AXI' ports...i b... view more
Ask a Question
Create
+ Discussion
+ Blog
+ Document
+ Video
+ Project Story
Find more resources
Discussions
Documents
Events
Videos
Project Gallery
New Community Member Guide
Related support document topics