EAP-PEAP with Mschapv2: Decrypted and Decoded 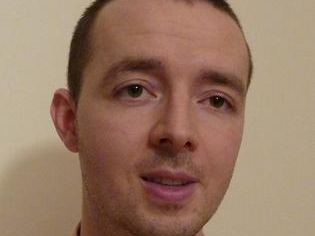 The aim of the article is to show how  EAP-PEAP is used for 802.1x networks. I will also show how to  troubleshoot it at the packet level. For the inner method we will use  Mschapv2 - which is most common inner method for EAP-PEAP. We will look  at phase1 negotiation for EAP-PEAP which is used to establish secure SSL  tunnel. That secure tunnel is used to protect phase2 which uses  Mschapv2 for peer authentication. I will present a method to decrypt  that SSL tunnel and to decode Mschapv2 session.

Some basic knowledge about EAP and SSL is required.

I will base on practical examples and files attached to this post. I will refer to following files:

This part is really simple, there is already a lot of documents on the Internet. So I will not cover this part in details.

Right  now popup appears on Supplicant and user provides username (cisco) and  password (cisco). Supplicant is responding with EAP Response with  Identity “cisco”. This packet is received on NAD, EAP is decapsulated  from EAPOL, encapsulated into Radius and sent to AS. All further  communication uses the same transport mechanism. EAP session is built  between supplicant and AS.

Supplicant  sending EAP Response with Type “EAP-PEAP” - which means that method is  accepted by supplicant. In the same packet we already SSL payload  (Client Hello)

AS responds with SSL Server Hello  with it's certificate attached. EAP framework does not support  fragmentation, each EAP method need to implement that on it's own.  EAP-PEAP supports fragmentation (it's not specified for EAP-PEAP but for  EAP-TLS certificate can be up to 16MB in size - RFC5216).

At this stage AS already agrees on SSL cipher suit and send random session id.

AS acknowledges that and finished SSL session establishment.

Supplicant send empty EAP Reponse with Type “EAP-PEAP” (this is not SSL encrypted packet). This is in accordance to http://tools.ietf.org/html/draft-kamath-pppext-peapv0-00 (Appendix A Examples) to acknowledge SSL tunnel establishment and end of phase1.

If  you look for the rest packets in eap.pcap – they are encrypted by SSL.  That is used to protect phase2 which is used for Mschapv2 peer  authentication.

Except the last packet 18. This is EAP  Response with Code 3 (Success). It can be read by NAD to verify that  supplicant has been authenticated successfully. But NAD can and usually  does read that information from Radius header (Access-Accept Code) along  with other Radius authorization attributes.

Can  we decrypt that SSL packets easily ? Of course for that we need server  private key. It's not always so easy. If you troubleshoot production  network it's sometimes easier and more secure to generate and install  self signed certificate on AAA server and use that one  - just for this  process.

It  also depends on cipher suits. If DH (Diffie-Hellman) cipher suit  is  being used we can not, because DH is used to establish secure key in  unsecure medium. We would need to get dynamically generated secret  values (a,b) from supplicant and AS to decrypt such a session. Of course  it's possible but quite difficult to perform.

But if RSA based cipher suit is used – it's much easier. All we need is a private key of server (AS).

So the client propose all types of ciphers but server accept TLS_RSA_WITH_3DES_EDE_CBC_SHA.

We can decrypt it easily then.

Wireshark has the option to decrypt SSL traffic:

So  i wrote perl script (dump.pl) which search for SSL session encapsulated  in other protocols. Then it creates dummy TCP session with that SSL  payload. Tracking of session is based on L2 (ethernet address)

The output of the script is ssl.pcap file which can be decrypted by wireshark.

More info/details about script at the end of this document.

After we have ssl.pcap it's time to configure wireshark:

Remember  to compile wireshark with gnutls and gcrypt support. Gcrypt was not  default on my gentoo box and it did not work (read debugs to verify).

Right now – when opening ssl.pcap in wireshark we have SSL payload decrypted.

The bad news is that wireshark does not understand Mschapv2 nor EAP encapsulated Mschapv2.

We need to decode it manually.

At  this stage we will continue packet reading. Previously we have finished  on packet9 which was not SSL encrypted (we will not see that packet in  ssl.pcap). No we will read ssl.pcap file.

This is first SSL payload. It's identity request send from AS:

This is first surprise. Why we do not see full EAP packet here ?

This  is intended for packet 9 and 10. Full EAP packet would need to have  type field with specific value (for example Mschapv2 as you will see it  later). But at this stage we do not know that. After AS gets client  identity it can choose which inner method to use based on that identity -  and propose that in packet 11.

Does  cisco ACS use that ? No, it can read Radius-IETF User-Name attribute  from first Access-Request - then based on that username put that session  into specific service. That is controlled in Access Policies / Service  Selection Rules, example: 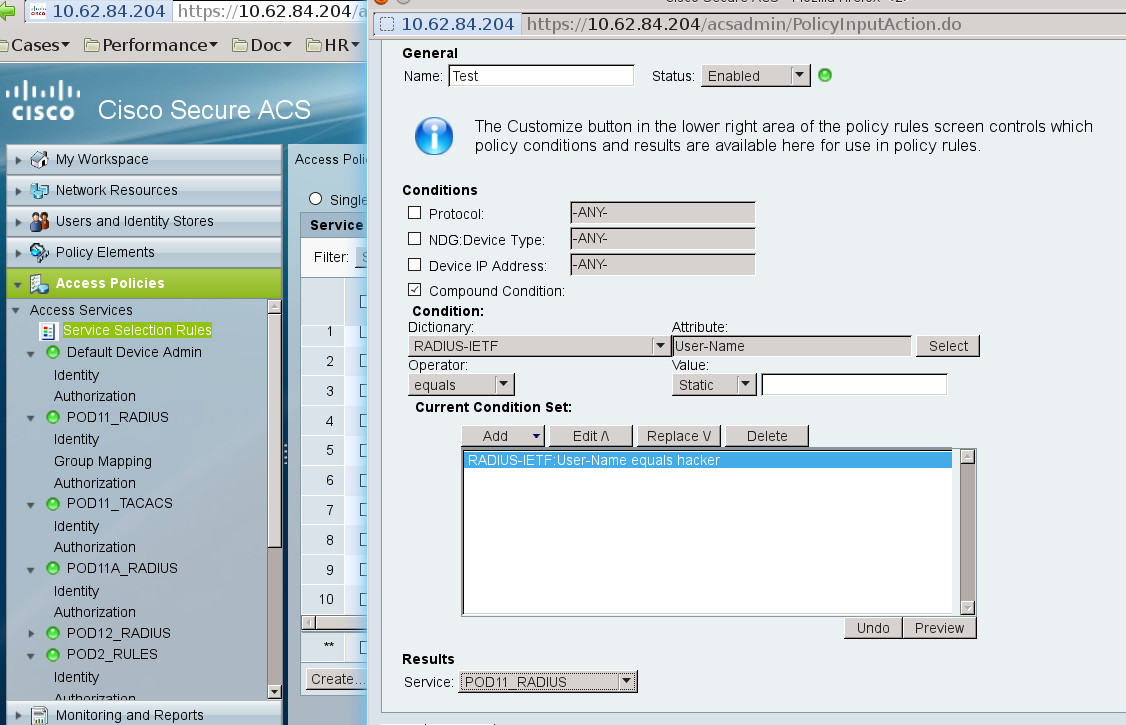 In specific  service (POD11_RADIUS) we might have enabled for example just EAP-GTC as  inner method for EAP-PEAP - then in packet11 that will be offer send to  supplicant: 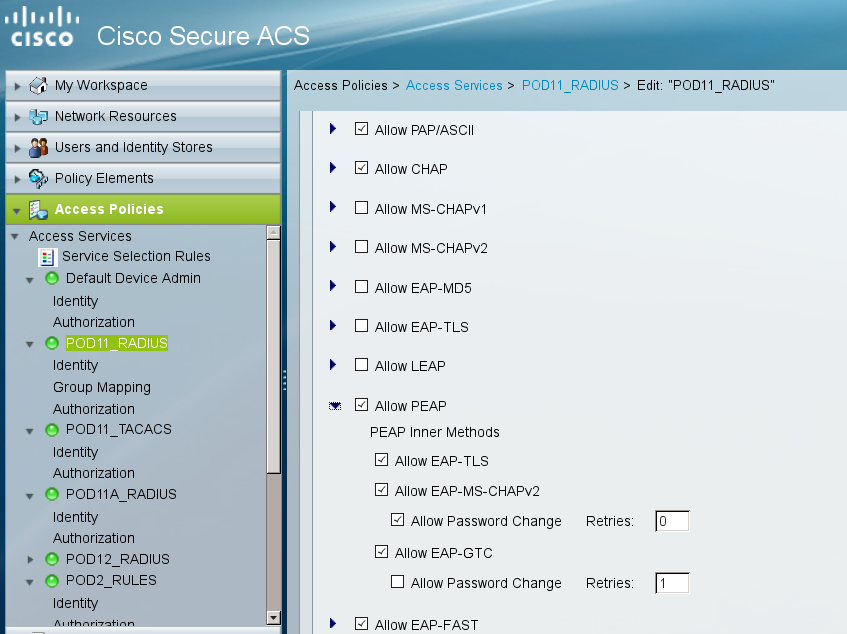 In  our case AS sends Mschapv2 challenge (default setting) . Indeed we can  see here the first field is Type as described above. But then we have  Identifier, Length, Opcode – as described in: http://tools.ietf.org/html/draft-kamath-pppext-eap-mschapv2-02 (EAP MS-CHAP-v2 Packet Format).

After fixed length value-size we have 16bytes of challenge.

Last we have identity of authentication server (AS) which is “acs” in our scenario.

That type of frame is not consistent with most EAP-PEAP drafts (different order of fields, no code filed). Why ?

The response is found in http://tools.ietf.org/html/draft-kamath-pppext-peapv0-00

That is also not entirely true, also we are using Windows XP SP3 not SP1. But from now on the first field will be always Type.

If  supplicant have a correct password it can create correct response. This  packet is pretty similar, but with Opcode=2 (response) and 49 bytes of  challenge response which consists of:

8 octets: Reserved, must be zero

Last part of this packet is Name which represents name of peer's user account name (“cisco”).

AS  performs similar computation to count correct response. If it matches  with received one it sends Success Request Packet (Opcode=3). Payload of  that packet (42 Bytes) is message authenticator. This is used by  supplicant for verification.

If  supplicant verify message authenticator it sends empty Success Response  Packet (Opcode=3). In general this is enough. We are already  authenticated.

This  is moment when EAP-extension is being used. AS sends Extension Request  Packet with Type = 33 (EAP extensions). It has only one mandatory AVP  which is ACK result.

Supplicant respond with with the same packet but opcode = 2 (response).

The last 2 packets is the additional step to acknowledge the successful result of authentication.

I wound not expect to see this step for linux/opensource supplicants.

We have several peer identities being sent, all of them can differ:

We also have User-Name AVP in all Access-Requests for Radius which tunnel EAP frames to AS.

This creates some potential misinterpreting and bugs in software.

Moreover we might have multiple identities being send in one EAP session.

According to http://tools.ietf.org/html/draft-josefsson-pppext-eap-tls-eap-06 5.7 (Identify verification):

We  can see that EAP-PEAP with EAP tunneled Mschapv2 implementation in  Microsoft is not clear. It's not event 100% compatible with drafts. Also  please notice that drafts are pretty old and are ralated to WindowsXP  SP1. Moreover behavior differs between operating system version.

Latest Contents
Unable to deploy policies from FMCv on GCP
Created by Arun2022 on 05-16-2022 06:34 PM
0
0
0
0
Hi Team,   We've setup a temporary FMC on Google cloud to migrate from 5525 ASA to Firepower FTD, the configuration has been migrated successfully via the migration tool. However, we are unable to deploy the policies onto the FTD. Please see the atta... view more
Cisco FMC Snort Rule Automatic Downloads
Created by agilliup on 05-16-2022 02:36 PM
2
0
2
0
I've been asked to gather documentation that proves that automatic snort downloads that are scheduled are checked via FMC prior to being downloaded. They are asking to see if the hash is checked prior to installing the new .vrt file into FMC. Can anyone p... view more
ASA VPN Cannot ping across split Tunnel
Created by chris.bias on 05-16-2022 01:50 PM
3
5
3
5
Hello little bit of a newbie when it comes to Cisco ASA and setting up the VPN but I have it configured but not able to ping anything internally. Please advise if you need to see my config I will be happy to provide it.
Install Cisco ISE Passive Identity Connector
Created by Aktham Salman on 05-16-2022 12:48 PM
0
0
0
0
Hello everbody,After install Cisco ISE Passive Identity Connector on vmware esxi 6.7 with requirements 8 core,32 gig ram, and 250 storage faced issue  probing edd (edd=off to disable)... ok, with boot select  [2] Cisco ISE-PIC Installation ... view more
Web proxy in transparent mode (WCCP) is not working after th...
Created by jds5 on 05-16-2022 10:10 AM
1
0
1
0
Hello,   We have 2 transparent proxy appliances in use for guest communication. We have updated one of the two WSA proxies to version 14.0.1-053 Since, this proxy no longer receives client connections. Following this situation, the second prox... view more
Ask a Question
Create
+ Discussion
+ Blog
+ Document
+ Video
+ Project Story
Find more resources
Discussions
Blogs
Documents
Events
Videos
Project Gallery
New Community Member Guide
Related support document topics