Cisco Community
English
Register
Login
Great changes are coming to Cisco Community in July. LEARN MORE
RegisterLogin
Options
Turn on suggestions
Auto-suggest helps you quickly narrow down your search results by suggesting possible matches as you type.
Showing results for
Search instead for
Did you mean:
1133
Views
0
Helpful
3
Replies

I am using 2 WS-C3650-24TD's for my external switch stack. They are both currently located in one of my two server rooms. I was hoping to move one to the other server room, for better redundancy. I thought that I could do a virtual stack between them however it doesn't look like it is supported. Any thoughts or advice on how to get this done. Attached a picture of where I am trying to go. 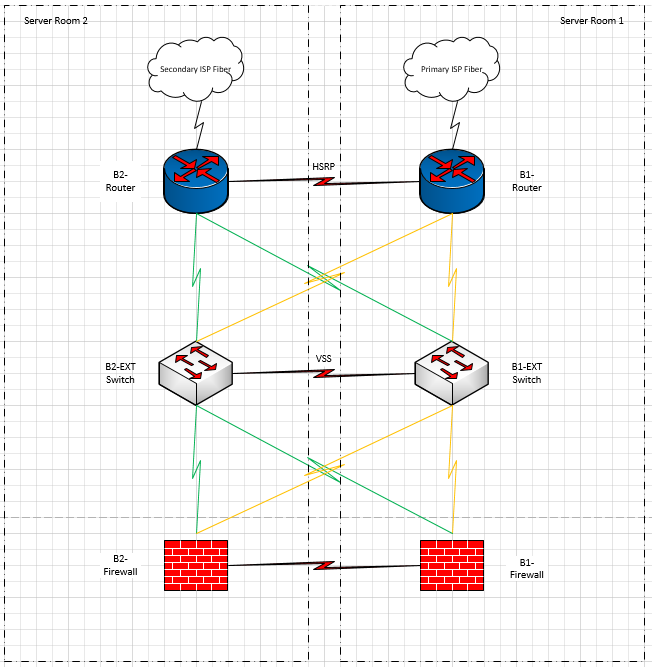 Beginner
In response to Stacia Taylor

obviously depend on how far are the IT rooms

Hall of Fame Master
In response to Stacia Taylor

you cannot build a stack using fiber based 10 GE links on C3650 in your IOS XE version.

The following are restrictions for your switch stack configuration:

The stack cable can be only up to 3 meters (or 5 meters ) so it is not possible to keep the stack and move a switch in the other server room.

To be able to put the switches in different server rooms and to interconnect them with fiber based links you should remove the stack configuration and use each of them as indipendent switches.

But if you do that STP will be running on you topology.

And the the two devices will act as indipendent boxes so you would need to use HSRP/VRRP for providing a VIP  next-hop to other devices if using static routes.

To make each router to have boths links in the same subnet you should use IRB, BVI interface and bridge group.

If you do that STP will block some links.

The same reasoning applies for interconnections to devices after the switches ( I mean the firewalls).

In case you choice to make the switches indipendent for moving one in the other server room I would suggest to consider using  two Vlans one on Switch B1 and one on switch B2.

The same I would use two different Vlans to the ASA firewalls one hosted on switch B1 and one on switch B2.

(if the switches work only at OSI layer 2 the routers will use two Vlans to communicate with the firewalls but the same reasoning apply just L2 config is not performed on the switches).

At this point you wouldn't need to connect the two switches between themselves and you have two separated failure domains.

This was the way we made POPs many years ago before VSS and using two catalyst 6500 just as L2 switches.