Cisco Umbrella is a big DNS service that provides not only the DNS resolution but also if the hosted website is trust or malicious, the idea behind the Layer DNS Security is that the modern attacks uses the DNS in the first step either to redirect the user to a malicious website or after the infection is happened through the installation of a malware, the first thing the malware will do, is to try to find out the Command and Control server in order to receive instructions by using the DNS to find the IP address, the DNS request is redirected to the Umbrella and the attempts is blocked.

Now the question is what if the infected host does not use the DNS to reach out the Command and Control server? instead it uses the IP address to establish an IP connection with the C&C in order to bypass umbrella.

The most interesting question for an administrator is: How the IP Layer Enforcement Works?

After testing using Wireshark, the process is very interesting:

Since the host 192.168.1.39 is behind a NAT device, at the router facing internet, the source of the ESP packet is changed so, the NAT traversal mechanism is needed to establish the tunnel successfully, the roaming client send a NAT-Keeplive packet to detect if a NAT is present along the path.

5-Finally the initial IP connection is sent through the IPsec Tunnel , and received and blocked by umbrella.

Below how it works with simple example: 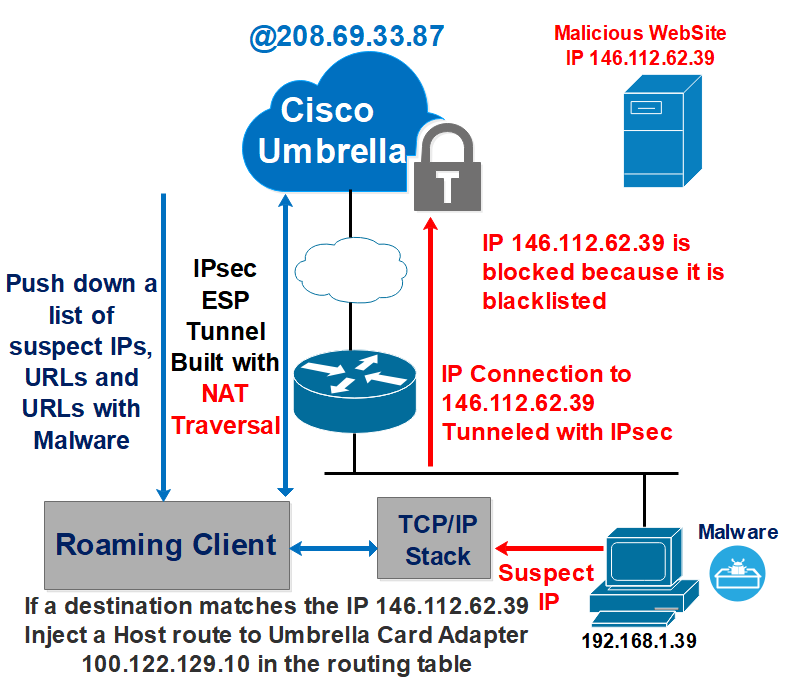 Latest Contents
FTD 4115 HA FO Link Flapping w/ Fault F0276
Created by a12288 on 07-05-2022 06:54 AM
0
0
0
0
Good day.I have a pair of FTD 4115 HA somehow the HA FO link (e1/3) started to flapping w/ fault F0276 every few seconds (verified via API call and PING). Currently the HA is broken and primary unit is showing being disabled. This is a new deployment and ... view more
Migrate multiple context ASA with overlaping subnets to FTD
Created by Chess Norris on 07-05-2022 06:35 AM
3
0
3
0
Hi, We are looking to migrate an old ASA 5585-X with multiple contexts to a FTD 4112. The challenge that we are facing is that the ASA use the same VLAN ID's and subnet for the outside interface, but on different contexts. Since we are now moving to a FTD... view more
ASA certificate change
Created by manvik on 07-05-2022 05:49 AM
1
0
1
0
Need to change ASA certificate in ASDM used for anyconnect VPN. The certificate is public CA signed one. Does changing certificate disconnects already connected anyconnect clients? ASA supports .cer or crt format?
IPv6 Bogon ACL Needed?
Created by AudieO on 07-05-2022 04:25 AM
1
0
1
0
Has anyone ever implemented it on the Edge router/firewall? I put it about five (5) years ago, and never got any hit.Here is the link: https://team-cymru.org/Services/Bogons/fullbogons-ipv6.txt I thought it was useless back then, but I do not kn... view more
ASA AnyConnect license limit
Created by vitumbiko nkhwazi on 07-05-2022 03:45 AM
5
0
5
0
I recently purchased a Cisco AnyConnect license for ASA5510 with the below details: L-AC-PLS-LIC=   Cisco AnyConnect Plus Term License,  Total Authorized Users 25 When i check the license information on ASA, it shows that it has 2... view more
Ask a Question
Create
+ Discussion
+ Blog
+ Document
+ Video
+ Project Story
Find more resources
Discussions
Blogs
Documents
Events
Videos
Project Gallery
New Community Member Guide
Related support document topics