Cisco Community
English
Register
Login
Let us know how you are using GESTURES in Webex for a chance to win a Cisco 730 headset!
RegisterLogin
Turn on suggestions
Auto-suggest helps you quickly narrow down your search results by suggesting possible matches as you type.
Showing results for
Search instead for
Did you mean: 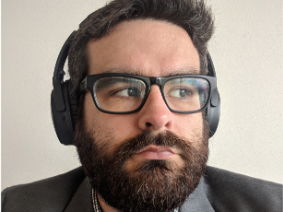 It has been quite a week for Cisco! Cisco Live is always a good and exciting time for everyone involved. If you follow this blog, then you've seen all the awesome announcements and improvements we've made to Cisco Spark, and if you followed #CLUS on twitter, you've felt the excitement that permeated the Las Vegas Strip from MGM to Mandalay Bay and everywhere in-between.

It all started off with a great message from Ruba Borno about women in technology.

Technology is helping level the playing field for men & women. @rubaborno breaks it down for us.#CiscoEWN #CLUS pic.twitter.com/jSXRW3STw8

The opening keynote was especially festive!

It's a bit cloudy here at #CLUS - love the spirit! @Cisco pic.twitter.com/1MyobCiapz

And it didn't end without some wise words from our very own Chuck Robbins...

We are at our best when we impact the world positively. -Cisco CEO @ChuckRobbins #CLUS pic.twitter.com/7tIQNdheth

...and a special word from Apple CEO, Tim Cook.

#CiscoSpark app will integrate with iPhone for a seamless calling experience." @tim_cook  at #CLUS pic.twitter.com/ar25IdOzbG

For a few days we had the Spark Game of Life up and running in the DevNet Zone. This fun little demonstration showed how you could connect pretty much anything to Spark using our robust APIs. In this case it was a game, in another case it might be something more like a task management system.

Come play the Spark Game of Life and see how you can integrate #CiscoSpark APIs into just about anything! #CLUS pic.twitter.com/m5ZUjTL2j5

Elsewhere in the DevNet Zone, we had our experts from Spark for Developers and Tropo on hand to answer any questions that convention attendees had about either platform and their APIs.

Ask these guys anything you want about developing for #CiscoSpark in the DevNetZone in The Hub at #CLUS. pic.twitter.com/O7x3p1MvQU

Here to answer ask your #Tropo questions in the DevNetZone! #CLUS pic.twitter.com/YS6LvakGB7

The whole week was filled with informative talks...

Give people what they want, when they want it, the way they want it, at a reasonable price @KevinSpacey advice #CLUS pic.twitter.com/YeHqNb24Vh

Telling Boston how much I enjoyed sharing my stories with the amazing audience at @CiscoLive #CLUS pic.twitter.com/08m874wfLF

In short, Cisco Live! US was everything you could have hoped for and more! And it didn't hurt that it was held in one of the most festive cities in America, Las Vegas! Let us know what you thought about Cisco Live! and follow us on Twitter to keep up to date on where we'll be next!

Latest Contents
Disable Cisco Standard Toaster Notification
Created by Thomas G. Johannesen on 06-18-2021 06:39 AM
0
0
0
0
Hey. Anyone know if it is possible to disable the Standard Toaster nofitication in finesse (That only shows incoming call number). I have made my own, but it conflicts with the standard one
CUCM AXL API - getTemplate?
Created by pescla on 06-18-2021 01:17 AM
0
0
0
0
So i checked the wsdl / Documentation, and i couldnt find anything, but want to ask just in case it doesnt work. Can you not list, get, add, update templates via API? When rolling out new locations for customers, it would be very useful to automate t... view more
How to get team user change state events in pidgin.
Created by HassnainMurtaza77 on 06-17-2021 10:55 PM
0
0
0
0
I want take subscription of Team User Events in pidgin for node/finesse/api/Team/{id}/Users.How I can subscribe to events and what I should pass as a "resource" inpidgin.I am using this documentation to get events for team user change state eventshttps://... view more
At what stage Consult-Conference can be done
Created by upchaurasia on 06-17-2021 06:30 AM
0
0
0
0
Hi, We want to build a conference call  from user phone when user initiates an outbound PSTM call. 3rd participant of conference will be CTI Port Extension.My question is, how early we can create conference i.e. after which JTAPI event we can in... view more
Incorrect display of html messages sent by the bot via XMPP ...
Created by S.Vladimir on 06-17-2021 02:03 AM
2
0
2
0
Since version 12.9.5, the display of tags is broken(removed from the message), for example,the tags a, button, etc.For example:1)<button class="btn btn-primary" robot-type="robot-button" type="button" robot-message="Option1">Option1</button>Ve... view more
Create ContentLogin to create content
Question or Discussion
Blog
Document
Project Story
Video
Related Content
Discussions
Documents
Events
Videos
Project Gallery
Content for Community-Ad