Cisco Community
English
Register
Login
Change to content subject titles: starting July 28 there is a limit on the number of characters to use - LEARN MORE HERE
RegisterLogin
Turn on suggestions
Auto-suggest helps you quickly narrow down your search results by suggesting possible matches as you type.
Showing results for
Search instead for
Did you mean:
Announcements

It’s official! FTD 6.5/ASA 9.13.1 have been released. 6.5/9.13.1 is a critical achievement, delivering key features and functionality in four of our five core focus areas:

The release enables exciting use cases for customers of all sizes, improves hardware migration capabilities, and builds a foundation for future architectural plays. Destination SGT support – one of the most commonly anticipated features – not only improves access policy abstraction and unlocks a path to SDA integration, but also adds Security Group TAG eXchange Protocol (SXP) support for those customers who want to use ISE and FTD exclusively with Trustsec.

A continued investment in FMC reveals a much-improved initial setup experience, a whole new UI look and feel along with access policy filtering, object lookup, and NAT listing capabilities that simplify day-to-day management tasks significantly.  Migrating between different FMC models, including a scaled-up FMCv for up to 250 managed devices, is now much easier. FMC also increases the number of management domains from 50 to 1024 for service providers and other customers who employ multi-tenancy. Customers looking for more flexible managed device automation with custom orchestration solutions can now use FDM and full device API capabilities with native FTD application on Firepower 4100 and 9300 platforms, paving the way for future CDO support.

The Firepower 1000 device family adds a higher-capacity model and delivers full ASA and FTD application support across the board. The new software also enables the built-in hardware switch with PoE capabilities on Firepower 1010, thus allowing smaller customers and remote branches to replace multiple network devices with a single security appliance. The new appliance mode for all 1100 and 2100 devices automates provisioning and simplifies operation of ASA deployments, making it easier for legacy mid-range ASA customers to migrate.

Last but not least, FTD 6.5 switches to a Talos-backed URL Filtering solution with up to 109 web categories. While this change is purposely designed to be as transparent to existing customers as possible, the overall FMC configuration workflow has been significantly optimized for the expanded and modified capabilities, including submission of URLs for dispute directly from the UI. The feature remains compatible with pre-6.5 devices that use the legacy URL Filtering engine. 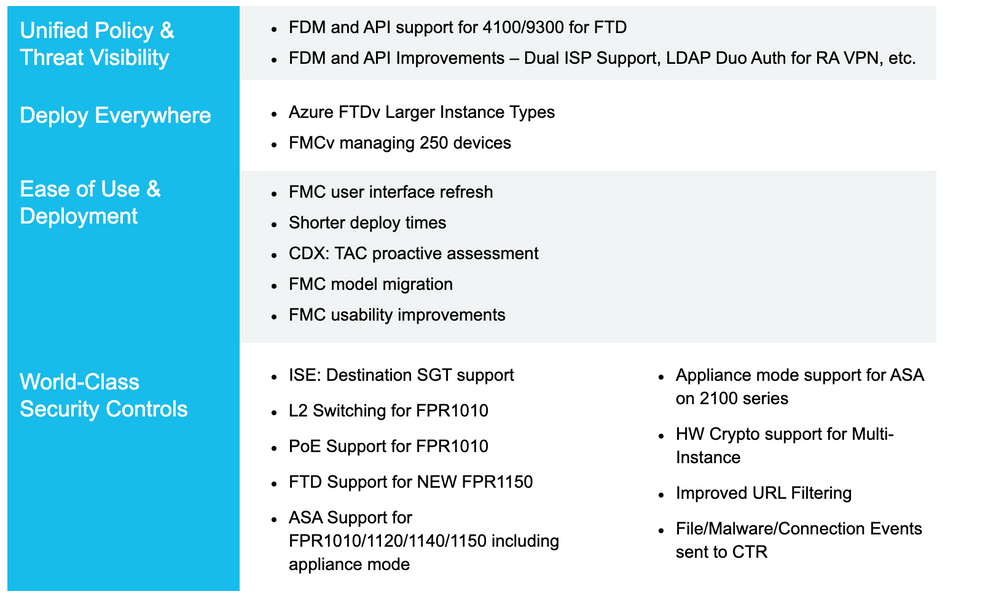 For more information, refer to the Firepower 6.5 release notes.

Latest Contents
Cisco asa 5505 vpn nat rule problem
Created by khasarvaanipurevdorj on 07-28-2021 07:52 PM
0
0
0
0
Hello guys Im begginer on cisco router and network thing. I have cisco asa5505 routerboard so i have created vpn. i have configured Group policies. We have inside network 10.150.0.0 with netmask 255.255.252.0. So on the NAT rule when i added nat... view more
Enable API in IronPort
Created by DunDmy on 07-28-2021 05:29 PM
1
0
1
0
Hey everyone, To some it might seem like a dumb question, but how do you enable API in IronPort. The AsyncOS API document states that I need to navigate to  Network > IP Interfaces, however, I'm not seeing this option. &nb... view more
CIMC Cisco ESA 695F
Created by Edisson Dario Gaviria Hincapie on 07-28-2021 03:59 PM
0
5
0
5
I have a Cisco ESA 695F. I understand it is a UCS 220M5 server. I would like to know if it is possible to enter the CIMC of this Appliance? If so, on which interface could it be?. Thanks.
debug site to site vpn
Created by bluesea2010 on 07-28-2021 02:11 PM
2
0
2
0
Hi,debug crypto isakmp did not generate any log  .is there any command other than this , I want to run on a production asa .  how to run a debug command without any problem. undeug all  command revert debugging ?  Thanks... view more
ISE 2.6 Vulnerability - Web Server TLS BREACH Attack
Created by Ricardo Matias Aires on 07-28-2021 01:50 PM
1
0
1
0
Hi. I have a client, with this vulnerability. Vulnerability title: Web Server TLS BREACH Attack * By observing the length of compressed HTTPS responses, an attacker may be able to derive plaintext secrets from the ciphertext of an HTTPS str... view more
Create ContentLogin to create content
Question or Discussion
Blog
Document
Project Story
Video
Related Content
Discussions
Blogs
Documents
Events
Videos
Project Gallery
Content for Community-Ad